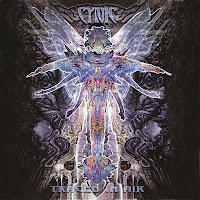 They've long been one of the most revered bands in the US death metal underground for the forward thinking, progressive edge of their debut Focus. Now, 15 years have passed and the band has returned with a glorious second effort, having hardly skipped a beat in all that time. If anything, Traced in Air is superior to Focus because it's even more aware of its nuances, and never fails to impress.

"Nunc Fluens" begins with a fusion of world percussion and abstract, discordant guitar feedback before the bass picks up, and the subtle guitars and vocal swells. This entire tune really feels like an intro, and you almost expect them to rage out on the second track. Alas, it is not the case, "The Space for This" begins with beautiful acoustics and catchy clean vocals until it finally lets loose with a barrage of familiar Cynic progressive speed picking hysteria. "Evolutionary Sleeper" has a similar tone to it, with acoustics alternating into catchy melodic vocals. "Integral Birth" is one of my favorite tracks for its winding tempo and infectious vocals and thoughtful lyrics:

From the void, I am born into wave and particle
In the uncreative eye, emerging oracle
A million doves, orbit round the Earth with tears of blood
Slay the dragon, take Integral Birth

Also you get to hear a few brief death growls here, which could only make me smile as I realize the band is not here to sacrifice its past but to evolve upon it. "The Unknown Guest" and "Adam's Murmur" are likewise excellent, with a similar concoction. "King of Those Who Know" begins with some spacious jazz acoustics and then the beautiful "Nunc Stans" leaves us with an almost Sigur Ros, post-rock grace.

It should be noted that this album has the spectacular ability to grow on one the more times you listen. I know my first few times through it I was only mildly impressed, writing it off as 'well, that's Cynic for you'. It's not until recent months that I've been able to admit to myself that this in fact the likely candidate for progressive metal album of the year and that it honestly blows away their classic Focus. Give it a chance, give it ten chances if you must. It will capture you eventually.

It's so easy to listen to on repeat, too. Such a rad album.

This album is really special.