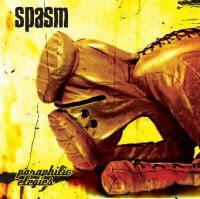 This is the sophomore effort from brutal Czech grinders Spasm, and it delivers the goods with super dense guitar distortion, a range of hilarious vocals including brutal death and then by extension the guttural sounds of a slop hog on tracks like "Paedophiliac Kindergarten Party".

I can't give Paraphilic Elegies my highest recommendation because, really, once you get over the humor of the song titles and listen a few more times, what is there? The music sounds nice and crunchy on the album but the riffs are just a few notes and not memorable whatsoever. The band thrives on its humor side, like many perverse goregrinders. To that effect, Spasm is funnier than most. Grinders should give it at least a listen for this reason. I liked the cover art for this. And it certainly sounds like the band had fun making it.