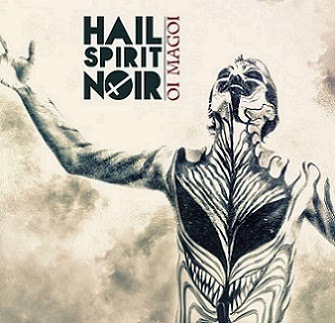 It is much to expect a metal album, or really any album, to take one on a journey, but the Hail Spirit Noir sophomore Oi Magoi surpasses such expectations with ease, offering a rare hybrid of psychedelic warmth, prog rock occultism, unusual instrumentation, eloquent and restrained sequences of orchestration, and mythopoesis. 50 minutes of contrasts between the sylvan glade orgies of mortals and ancient beings, and assertive black metal passages which exhibit both a contemporary sense of aggression and progression, without expressly alienating those of a more conservative genre mentality. There's not a lot to directly compare this with, but I might offer that it's a mash-up of aesthetics you'd find in bands as diverse as Ghost, Sarke and fellow Greeks Kawir. Some might chide the trio for latching onto the 'occult rock' bandwagon, but I can't say that they sound too directly similar to anyone currently exploring the sound; more of a straight bastardization of late 60s/70s psych rock, cult horror scores and intricately textured black metal; Coven's Witchcraft Destroys Minds & Reaps Souls topped off with some Spectral Lore or Acherontas, and for the past few weeks I have not been able to get enough of this fucking thing...

There are essentially two philosophies to this record, but each is comprised of a great deal of nuance and variation which ensure that very little predictability is maintained. You might catch on early that there will be haunting, wavering clean vocals, soaring ritualistic chants, and sugary bass grooves, but Hail Spirit Noir continue to exert their inventiveness through the implementation of flutes, percussion, and traditional sounds you're not going to find in a stock black metal experience. Within any sequence of measures, there will be something new evoked that further expands the repertoire of possibility, and while its true that most of the music's instrumental components have featured in other extreme metal outings, they've rarely been offered with this level of thematic cohesion. Production remains warm and vibrant, but the faster tremolo picked guitar explosions and harder hitting riffs lose nothing of the sinister nature they might provoke if mixed from a far rawer perspective. All of the vocals fit, from the Nocturno Culto growls to the folksier lamentations, to the distant, decrepit cries, and I couldn't help but feel like I was being sacrificed in the kindest way upon some altar around which satyrs and nymphs indulged in mutual, carnal affectations. It sounds really fucking whacko and it is, only Oi Magoi is in reality quite strictly balanced and controlled, never sloppy and never does any choice feel like it was out of place in the greater 'picture' of the album.

I would admit some preference towards particular tunes over others. For instance, the moody and trippy "Satan is Time" is simply the best song I've heard in 2014 thus far, while others like "Demon for a Day" or "Hunters" are merely excellent; but all of the content is addictive enough that its still recommended to tunnel straight through the record in order to the other side. Organs, synthesizers, bluesy ringing tones, black metal grooves redolent of Sweden's Head of the Demon, uncountable details that simmer and pop against the ritualistic black metal backdrop, it's as if Mortuary Drape and Goblin were asked to score some silent Hammer Horror film that had was just unburied from a vault of old reels. The black metal itself explores a vast palate, from the highly harmonic, driven and melodic ("Satyriko Orgio") to slower, eerie bits that remind one of ancient death metal if it had been delivered with less saturated distortion. The band even pulls off Hawaiian sounding surf-lite guitars, or passages that seem almost purely cinematic like the climactic swells you would experience in and Italian cult horror movie 30+ years ago, and even when they're committing to a more familiar, descending note pattern it feels fresh and refined, like it were the first time I had experienced it...

Not every riff is equally poignant, not every song infallible in sequence, but albums like Oi Magoi simply do not arrive each and every day of my life. It is the effort of cautious sonic experimentation, the principle of risk which exemplify the Greeks compositional choices. The call and response of the smooth and the jarring. It doesn't fit in seamlessly with the hipper occult doom rock stuff, due to its higher level of complexity, so I'm not sure that particular audience would appreciate all of the maudlin details and sentiments of antiquity, but it syncs up quite well for fans of visionary, gonzo black metal, surrealism and naughty Satanic acts performed in summery technicolor robes hung with garlands, rather than the flat blacks and crimsons normally associated with the subject matter. Not all is happiness here, in particular the vividly visceral lyrics, which cover cheery topics like gruesome sacrifices ("Blood Guru") or fiendish, flesh-rending sea creatures ("The Mermaid"), but it's totally that contrast beneath lush, verdant, watery climes and the horrific acts performed there which puts this over the top into 'unforgettable' territory.