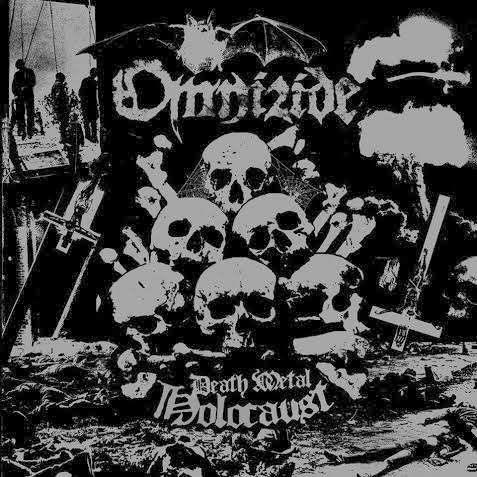 Rather than become the bazillionth utterance of its Swedish forebears' ideas, Omnizide attempts to tap straight into the primal, molten veins of what made the cruder death metal of the 90s so important to begin with. That's not to preclude this project of black metallers (Craft, Avsky, etc) from deriving a few riffing patterns here or there, but Death Metal Holocaust is clearly an album in which some investment of songwriting and variation occurred, and the result is that the guitars themselves and general atmosphere is noticeably catchier than what you're hearing from the majority of groups pursuing this path. There's nothing 'new' sounding about this debut, but it's appreciably abyssal, nihilistic, and wretched, with no apologies for its ugliness, or for giving the retro death metal aesthetic what it might need...a hellish injection of black metal misanthropy.

This is felt primarily in the harshness of the vocals, which forsakes a bit of the usual guttural depth for a more malicious, uncaring pitch that borders on the traditional Scandinavian rasp associated with a lot of second wave black metal bands. I'm reminded somewhat of their countrymen Nifelheim, which is no surprise because Omnizide has a similar spin on archaic extreme metal abuse not unlike Hellbutcher's side project Necrocurse which has been around for a few years. Nuclear wind-blown, dense tremolo picked guitars cross a bleak landscape of bone and ash, once in awhile coming up with a riff that actually sticks to the brain, something nearly impossible for so much of the death and black metal I'm hearing lately. But the real treat is that they'll mix these components up with slower, black/doom passages that really round out the record's capacity for atmospheric immersion. Typical Swedish death techniques like d-beats are included enough that Death Metal Holocaust remains in view of all the other bands exploring this skull-paved path down memory lane, but Omnizide maintain that pervasive sense of 'evil' that transcends a collection of safe riffs into more of an 'experience'.

That's not to say it's perfectly penned and executed, because there are definitely a number of chord patterns here that don't live up to the rest, in particular when they're playing in more of a Hellhammer/mid-paced Bathory mold it can get a little dull. Fortunately, they mix up the speeds often enough that it never becomes all that much of a detriment. Also, though they're slathered with a number of sustained, gory growls, Michael Nox's vocal pitch here can become as monotonous as an endless gray waste, in which the listener has only a limited range of visibility; whereas I often wanted the guy to go completely batshit and apply maybe a few more higher pitched ugly screams or other techniques to really go mental. That said, for some listeners, this will be a critical part of the record's charms...like Craft, the aim here is to compose simplistic, sinister and serious sounding tunes that leech the very color from the listener's immediate environment, and it's another record which 100% lives up to sounding like the cover artwork looks. Grim, ghastly old school death and black metal for fans of anything from Nihilist and Dismember to Craft and Pest. The album also does include the two cuts from the 2011 Please from Death single, which are slightly blacker sounding, but help flesh out Holocaust to a 40+ minute fallout, a breath of cinders, soot and hatred that, for a spell, rubs out the sunlight. Charcoal fucking metal.