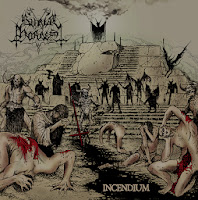 One would never accuse the Burial Hordes of taking the most 'subtle' or 'quaint' approach to black metal among their peers. They possess a sound that isn't even remotely Greek, perhaps, nor is it quite original, but it is undeniably brutal and effective due to the death metal overtures in the vocals. Hell, you wouldn't want to meet these guys around a bonfire when they ran out of goat-meat, and black metal NEEDS that sort of 'threat' factor present if it's to continue being taken seriously (or not seriously, as the case may be for some individuals). Granted, for all I know the members of this band are courteous, friendly puppies in the real world, but throw them into a studio with some instruments and what comes out is not fucking pretty, and not safe to adopt from the pound.

When I closely examine the riffing techniques here, my mind is immediate drawn back to the legends like Bathory, Mayhem, Darkthrone, Immortal and Marduk, and while I loathe such 'broken record' name dropping, I've been listening to this shit for almost 25 years, have heard it many thousands of times and find it impossible to make more contemporary comparisons when I am constantly drawn to the originals. But you get the point: it's a contrast of blasted pacing over either tremolo-picked notes or rapid chord progressions, against slower Hellhammer/Darkthrone grooves embedded that break up the momentum to give the mind and limbs a chance to rest without abandoning the 'evil' nature of the music. Where Burial Hordes expound upon the tradition is through this loud, roiling, rich production style which simply mightn't have been possible when the classics were being released in the early 90s. Incendium is resonant and raucous in tone, and you fully get the point even when the riffing patterns are mildly on the bland or predictable side, that they set an inescapable foundation of intensity, and the fell glories attained by the more melodic guitar lines which are almost redolent of melodic black/death crossover stuff like Necrophobic.

The drums are an organic tempest of flawless blasting, limbs everywhere, and I can honestly say that where they want to hit hard, they do. Hit fast, they do. Entirely dependable in any situation this music finds itself in, whether the straight opening attack of "Nailed Curse" or the moodier atmospheric calm deeper inside when a series of higher, sparser notes ring out over a light beat. Bass is audible but takes a backseat to the more prominent rhythm guitars which sound great whether they're speed-picking or trilling on some primordial, doomy groove like those near the sample in "Abomination". Having Cthonos' ominous, deeper growled vocals makes all the difference in tying the record together and distinguishing it slightly from those who prefer the rasped vocals...it's not a practice exclusive to Burial Hordes, but it gives the entire experience this predatory confidence, and the sustain of the guttural is simply more atmospheric. Incendium is ultimately not a novel experience, and a large percentage of the riff selection is less memorable than the remainder, but it definitely held my attention as much as their sophomore (Devotion to Unholy Creed) and well worth hearing if you like black metal with the consistency of a bulldozer. Ready to work! Ready to slay!