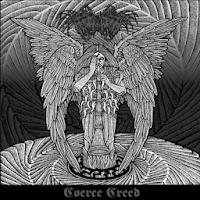 Coerce Creed is a clear candidate for that old Alfred Pennyworth Dark Knight quote 'Some men just want to watch the world burn'; so honed are they to the principle of aural destruction that annoying terms like 'songwriting' or 'catchiness' are eviscerated, stuffed and turned into sausages which the Singaporean trio then cram into their gullets. Obvious and inevitable comparisons will be made to the long-standing Impiety, in particular their older material where the production was hellbent on raucous annihilation, but I'd also throw a lot of other names like Bestial Warlust, Impaled Nazarene, Blasphemy and Conqueror into the ring, essentially the 90s 'war metal' gods who split the black, death, grind, punk and extreme thrash down their middles and then feasted on their intestines. I would say Nechbeyth definitely play a little closer to the raw black metal aesthetics once fostered by Bathory, only accelerated into a blasting, grinding whirlwind of carnage and calamity, and a more contemporary comparison would be Deiphago, only Coerce Creed is less loosely structured.

It's fun, like stepping on an insect is fun, or urinating on a public monument when nobody is looking is fun,  but it comes at the expense of the sort of composition that will roll around in your brain like a marble for a few months afterwards. But that's not the point: Coerce Creed is violence personified. Blasted beats in which the kick drums hammer into a blur, the splashes of cymbals and the rifle snare taking control while the rhythm guitars cycle between traditional death/black metal tremolo riffs and more potent chord progressions, and no bass guitar to be heard anywhere. I wouldn't have minded that deeper end presence to flesh out the destruction a little better, but this band shifts through so many cacophonous riffing passages in so short a time that you're not going to care much, as long as the layered rasps continue to rave their nihilistic paeans to the war metal pantheon. I'm pretty sure we can guess which of the Four Horsemen visited these mens' dreams one night, if titles like "Ruination Conquest" and "Eradication Conquest" don't give it away, but from the sound of it he not only offered them direction, but a stable of steeds to ride unto apocalypse, and these five tunes are the sounds of those infernal destriers neighing and galloping and trampling, crashing against the gates of Heaven until every bone in their equine bodies is shattered.

Incendiary imagery, indeed, but I feel it really well describes just what you're signing up for when you spin this MLP. To Nechbeyth's credit, they do offer a few 'breathers' in there, like the "Intro + KSMT Oath" which opens with with a martial/ritualistic ambient sequence and then thunders into a slower instrumental with lots of drums and open chords, or the closer "Lynch Directive" that flows along with some grooving Celtic Frost/Darkthrone chords before tearing your skin off. In listening, I definitely felt myself wanting for a few more atmospheric tinges, like atonal, frightening melodies, sporadic leads that erupt with no sense of logic or direction, or harsher walls of ambient noise threaded directly into the meat of the riffing; but that's not so much to fill any 'void', since this is an incredibly kinetic release. It's more that I felt at places it could have used an even further sense of bewildering chaos. The riffs themselves are suitable to the speed and style, but not exactly standout on their own merits...we've heard this before, basically. As it stands, though, Coerce Creed is a solid war bastard metal record, sounds tighter than the debut record (Blood.Axis.Domination), which bites off no more or less than what the trio initially promises: a thermonuclear racket of riffing prowess and harsh, grating apocalyptic poetry. Shiva on a bad hair day. You'd better duck.