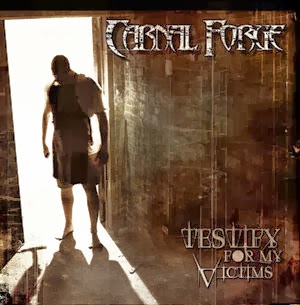 No matter how you slice it, Testify for My Victims is the best written of Carnal Forge's albums to date, and a very easy recommendation to make for anyone who is by this point still interested in Swedish melodic death metal of the 21st century, and I realize that is a diminishing (or long since diminished) group of people. Improving the archetypal death/thrash of their earlier material while simultaneously widening the level of variation in their songwriting, you've got light traces of groove metal or death & roll applied to the rigorous balance of melodies and punchy, clinical thrashing rhythms to die for, all delivered with the moderation and care of seasoned veterans. There is a depth to the composition which isn't necessarily a broad deviation from previous records, but even the basest chugging patterns here are glazed with just enough mood and melody to make them efficacious to explore.

Perhaps it's the most 'progressive' of their outings, and that's not a bad thing...you've still got much of that propulsive thrash pacing, but a lot more emphasis on mid-speed tunes that explore more complex bridge sections, and take more risks than the older albums without alienating anyone who enjoyed them. The mix here is probably the cleanest I've experienced, but there's quite a lot going on, and even if Testify... might not match its predecessors in sheer momentum and heaviness, it's just so more likely to be remembered weeks, months, or even years after you've heard it. I admit a little bias, since aesthetically this plays out like a kid sibling to Darkane's phenomenal Layers of Lies, one of the best records to ever emerge from this scene and be systematically ignored. It's artsy, modern, surgical in its musicianship, and at times profound, but most importantly it might have carried a note of nuance or originality if not for that other album predating it by a couple years. Not to write this off as some ripoff, because Carnal Forge always worked in parallel to several of their Swedish peers, but it's certainly an album that takes a few spins to fully appreciate and unravel, despite so much of the content being instantly accessible to the At the Gates/Soilwork fan. They obviously took more time releasing this than any of the older works, and it shows.

There's also a similarity to Darkane in vocals: new front man Jens C. Mortensen, who some might have remembered from the Swede-thrash act Slapdash in the 90s, has that same passionate desperate rasp that characterized a Lawrence Mackrory, or more specifically Andreas Sydow. You still get a smattering of the multi-tracked shouts, but Jens is somewhat superior to his predecessor Jonas Kjellgren at embedding some textured, harmonic howls into the verbal battery, while feeling really raw and off his fucking nuts the rest of the time. As clinically polished as the recording is, he always reminds you that this is essentially serial killer death/thrash and better embraces the psychopathy or sociopathy that subject matter entails. To an extent you can still trace the lineage back to Lindberg of At the Gates, but Jens makes it feel like you are being stabbed by a knife through some rift in reality opens up in a dank back-alley or a butcher-shop which is now being used for more nefarious purposes than cheeseburger patties. I don't have the fondest recollections of Slapdash's 240.25 Actual Reality but it was certainly energetic, and he surpasses himself this time around.

Another point in the record's favors is how the drums and bass here really seem to round out the rhythm guitars, rather than just stubbornly support them. The riffs are a little thinner in production, so a meatier warmth to the bass and potent snare strikes seem a better complement. For some reason I was reminded a lot of Tomas Haake's flawless industrialized-human-hybrid style, only Carnal Forge don't play in the same unusual time signatures and the guitars don't cultivate the traditional djent tone. Simpler groove/chugs here all seem to have a direction to them, pointing to the more accelerated passages and also the moodier, more atmospheric sequences. Lyrically, the themes here flow a better between the murderous mayhem that fascinated the Swedes on their earlier efforts to sacrilegious anthems like the wonderfully titled "Godsend Gods End". I really feel that passionate, personal torment and desperation that I so enjoyed on Darkane tracks like "Secondary Effects", and on occasion the meticulous melodies, pinpoint rhythmic punch and Mortensen's grating antipathy make me want to pull my own intestines out and then strangle other people with them...it's futurist, visceral fucking mayhem akin to a high definition slasher flick in which some stylish suit takes out his own imperfections on those around him, a Patrick Bateman for a Swedish Psycho and I heartily recommend it over anything they've ever done before; the promise of Please...die! embodied in the brash control of Layers in Lies, and still a lot of fun to experience years later. It doesn't look like much, but it sounds like much more.