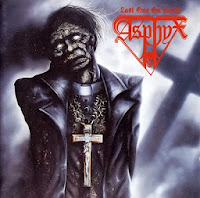 Last One on Earth immediately trumps its predecessor by effectively face-planting it into war-torn concrete and then stamping on it repeatedly while beating on its own chest. Admittedly, there is still a bleed-through of somewhat uninteresting riffing progressions, and this is not a record which I rank among the most highly prized gems of that 1987-1993 epoch of 'classic death metal', but it says a lot that it remains my favorite Asphyx record to this day, even more so than efforts like Death...the Brutal Way or Deathhammer which have transplanted its aggressive formula into the universe of contemporary production standards that, frankly, make a lot of older, low budgeted records sound like you're hearing them through a sewer grate. Granted, my favorite 'Asphyx' albums are called ...of Frost and War and On Divine Winds, but take that as you will, because without the existence of this sophomore (and Bolt Thrower), we wouldn't have gotten those. This was also the final Asphyx album to team up Martin van Drunen, Eric Daniels, and Bog Bagchus...all would be a part of the lineup in the future, and reunite for the Grand Supreme Blood Court debut, but Last One on Earth really marks the end of that 'classic' tenure and deserves some respect.

Not that it can't cultivate that dignity through its musical value alone, for where The Rack often presented some rather dry, lackluster compositional scenarios, Last One on Earth is simply more exciting and more coherent an experience, on which the instruments and vocals gel together far better. Ron van Pol's bass lines are far more caustic and fuzzy, potent enough to drive home the lyrical themes and stand up to the rhythm guitar tone which once dominated them a bit much on the debut. Speaking of which, Daniels doesn't detract from any of the crunch of the prior effort, but here the chords really club the listener in the gut, and the Death style tremolo riffing sequences in tunes like "M.S. Bismarck" help remind one why they were so cool in the 80s. Drums still retain a lot of that rock stability, with lurching and minimalistic grooves to accompany the death/doom progressions that litter the landscape, but again they seem mixed a little better in balance with the other performances, and in union the three players give off an impression of a rusted tank of veterans just trying to win a battle by any ugly means necessary. Van Drunen's vocals aren't a hell of a lot different than Consuming Impulse or The Rack, unless you count that he seems to strain himself into an even more pained and bloody pulp, but really he's got such a tremendous presence anywhere that he doesn't exactly need to change up what he's doing. Very peculiar when you consider that there was some disconnect among the band members by this time. I'm not sure if he was even with the other guys when recording it, but somehow the record is completely cohesive despite that.

When it comes down to the riffing alone, this isn't the most exemplary or intricate in terms of construction or constitution, and yet it's clearly more passionate in execution than the debut, which felt a little haphazard and lazy in places. There are some brutally barebones death/doom groove patterns here in tunes like "The Krusher" which I find somewhat boring today, and also felt underwhelmed by when I was 18 and this was released. But it's really about perspective. Some people might find ghost stories frightening, or being in the dark spooky, or being jumped by a 90 lbs-when-soaking-wet schizoid crack addict intimidating, but to others among us, that's Thursday. That's lunch. Hell, if Last One on Earth had been one of my first death metal albums, I might have found it fresher and more menacing upon listening, but having already been into the genre when records like Leprosy and Realm of Chaos arrived I can't say it matches up. There's no creepiness in the processions of notes to rival the former, and as an example of a paean to desolate fields of conquest and genocide, the latter HAS no equal. Mental Funeral had really done what this record does better the year before. So, while the Asphyx sophomore is clearly comparable to such company, it just doesn't possess the stickiest riffs or atmosphere to keep me addicted. But it does fucking try, and that's why if you were to approach and ask me to opine on the career of these Dutchmen, I'd pass you this CD and then inquire you to tell me.

I wouldn't want to pigeonhole Last One on Earth entirely into that 'war metal' suburb of the death genre, because not all the lyrics here revolve around that specific subject matter, for instance "Food for the Ignorant" seems to expand upon the Axel Hermann cover artwork; but clearly tunes like "M.S. Bismarck" "Asphyx (Forgotten War") and "Serenade in Lead" deal in the specifics of conflicts and/or gunfire rampages, and this as a whole (along with Bolt Thrower) was an influence further fleshed out in Hail of Bullets, or other lesser known bands like Invasion. So there is some significance to its position in extreme metal history, beyond the fact that it's a pretty good time if you want to throw your mind away for a few minutes and just revel in the roiling riffs, doomed interludes, and ghoulish vocalizations that define pieces like "Streams of Ancient Wisdom" and "The Incarnation of Lust". If I break it down much further, the notes only occasionally move in compelling directions, perhaps too evenly dispersed between the slower and faster content, with no unexpected choices ever happening by even 1992 standards. That said, some albums are not meant to revolutionize the world, merely to catalyze its transformation into inevitable ash. Last One on Earth, if the name doesn't already give it away, belongs to that camp. Not as important to me as its peers of the time (Testimony of the Ancients, Cross the Styx, Shadows, Mindloss, etc), but you could do a lot worse than lounge out in its measured violence.