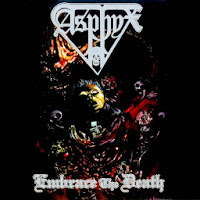 The mid-to-late 90s were marred with a series of Asphyx breakups and reunions that resulted in a number of iterations of the lineup, with essentially different original members giving the death metal a go. For example, the eponymous record was Eric Daniel's stab at a new roster, and God Cries was a Bob Bagchus-led effort which involved the earlier front man Theo Loomans. The same year the latter was released, 1996, they also put out Embrace the Death, which was one of those deals where a bunch of older recordings that essentially might have been their debut album in an alternate timeline finally sees the light, and this is more of less the continuity of that Mutilating Process EP I covered a while back. In fact it encompasses that material and a number of others tunes that would be 'redundant' with other releases, like "Crush the Cenotaph", but if you wanted a chance to hear what Asphyx might have sounded like without acquiring van Drunen and Ron van Pol, eat your heart out.

The Dutchmen already had a pretty grotesque vocalist in Loomans, and might never have needed them if he had continued on through the 90s, and Embrace the Death covers a pretty broad range of material from the chuggier death metal to some death/doom and even borderline grind bits. The guitars here are a bit more raw and unrefined than a number of the other 'official' studio records, but I have to say there is probably just as much if not meat on the tone here than anything else they'd done to this point. The riffs are largely the same, but cases could be made for a few of the tunes like "The Sickened Dwell" sounding superior to their Rack incarnations, if only because they seem more morbidly fat, with the leads disappearing into the overbearing walls of heavy. Bob's drums are audible but a little tinny against the corpulent rhythm guitars, and the bass just seems to service the bottom end contours of the riffing, but Embrace the Death is indisputably some dark sounding shit, most worth it to fans of groups Autopsy and Obituary who also 'embraced' some a twisted approach vector to the genre, borne on ugliness and crushing brutality more than technique. Now, don't get me wrong, there are still a lot of throwaway grooves or chord progressions here which don't generate a lot of compulsion in me compared to much of the death or death/doom I'd already experienced in 1996 (even accounting for its original 90/91 target date), but it smacks of that crude authenticity you feel when you experience an old death metal demo from the period.

The good news for fans and collectors is that there were some tunes exclusive to this recording which haven't seen release elsewhere (at least not in this particular form), like the 5 and a half minute death/doom slog "Circle of the Secluded" which is naturally slow and barbaric but has a few dour melodies to break up the atmosphere; or "To Succubus a Whore", a pretty brief tune which cycles through some measured blast beats over what sounds like one of the faster old Obituary tunes, then busts into this groove which reminds me a lot of a Candlemass tune if reinforced with a gallon of sewage and ugly gutturals. The Mutilating Process EP is also tucked in there at the end for some value. Granted, my preference remains with van Drunen over Loomans, though this guy makes a decent alternative for him, or Reifert, or Tardy, I just don't think he has that same level of sickness inherent to his performance. There's almost no versatility to the growls, though one could argue the same on certain songs that those other guys have performed on. Musically, the writing of these obscure tracks is no better than The Rack, somewhat predictable riffing patterns that rely a lot more on heaviness than creativity, though to be fair, they're a lot more generic when bands in the 21st century use them, which happens a lot more than you'd expect! At least in '89-'90 it still felt like fresh dirt. Anyway, not a waste of money if you love Autopsy or Cianide or have to own all the Asphyx material, but I was a little more curious about what the Bagchus/Loomans revival of the band would produce next.