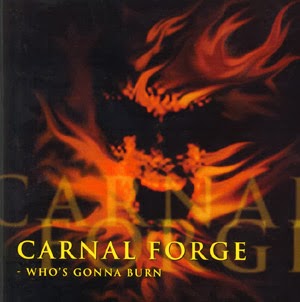 Carnal Forge was at one point a fairly interesting footnote amidst a batch of Swedish bands who provided a more visceral and aggressive postmortem to the success of countrymen At the Gates in the late 90s, after they'd pretty much run their course and then-newly converted fans worldwide realized nothing more was going to happen. There were a lot of more direct, melodic death imitators to happen along, and then some other acts which seemed to ramp up the speed and energy. At any rate, Who's Gonna Burn could be seen as 'riding the coattails' of a record like Slaughter of the Soul, but in fact it had a lot more in common with stuff like Darkane (if not as atmospheric and industrial), The Haunted (who were slightly more accessible), or the Speed (Soilwork) side project Terror 2000, or even a more intense Slapdash (who would ironically provide the new vocalist for this band down the road). Most of the members of Carnal Forge had cycled through a number of other bands in the scene, and many have since gone on to be slightly more successful in later projects, but for a while there was some hope that these guys could break through due to a pretty high visibility on labels like Century Media.

Who's Gonna Burn was their sole offering through Relapse, and if nothing else, it's a certified pissed-off take on modernized 90s thrash which borrows only a bit of the 'Swedish' thing, and is more directly inspired by material like Slayer's Divine Intervention (and beyond). Raunchier-than-normal vocals sound like a more youthful and disgruntled Tom Araya sans the screams he used to spit on the old 80s shit, with a nearly distorted sounding howled sustain. Propulsive rhythm guitar riffing reminiscent of anything from Razor to the first two Haunted records if they were slightly accelerated, and there's also a sense of tough guy attitude among some of the more obvious chord progression choices that could be traced to anything from groove metal (ala Pissing Razors) to commercialized NYHC (Biohazard). I could have sworn I even heard a little Brutal Truth influence to some riffing patterns but I could never prove it in court, and hell, a few tunes like "Sweet Bride" sound like Judas Priest "Painkiller" power metal sped up and made dirtier thanks to Jonas Kellgren's barking vocals. But, even if a lot of the roots of this material wasn't exactly unique for its day, there's definitely something modernized about the approach that felt like they were taking thrash into a more vicious terrain than it had normally tread in.

Who's Gonna Burn is punchy and concise, with few of the tunes clocking far beyond the 3 minute mark, but a fair share of riffs involved even when they're meting out some blistering brief like "Born to Hate" in under two minutes with the chugging breakdown. The album involves probably a half dozen or so palm muted riffs that are utter garbage, but the rest at least attempt to sound inspired and uppity like they were being performed by some Stockholm street thugs that just made off with a few stolen loaves of bread tucked under each arm. The problem here is the same as it is with so many other thrash bands beyond the 80s...the lack of strong songwriting with regards to choruses and individual 'money shot' riffs. No matter how intense Carnal Forge plays, and they do...like 16 year-olds racing towards ejaculation in every tune, they simply do not have the capacity for sticking that load in the listener's memory. It's all speed and slaughter with little to no substance, and you're always waiting for that one amazing riff to justify all the average ones and it just never comes along. They do offer a little variation here or there what with the breakdowns, leads, occasional melodies and the harshness of their high-speed violence, but when it comes to really having tracks that resonate through the decades, like on Darkane's Rusted Angel which appealed to a lot of the same crowd, Carnal Forge just falls flat, and it's too bad, because this debut clearly had some effort going into it.

Anyway, it sounds absolutely nothing like Carcass, apart from the band name and the fact that it's got some thrashy/death hybrid riffs strewn about like on Heartwork. Also, the band's cover artwork sucks, it always would suck on every album, and they never seemed able to pin down a logo to save themselves. All of those are superficial complaints, but they did contribute to the feeling that this band was 'D.O.A.', another middle run act caught up in a flurry of national signings when Sweden could 'do no wrong'. Nothing about this is unprofessional or incompetent, and in truth the band is viciously throwing punches whenever they can, so there's nothing 'boring' or wimpy happening; but it's just so uninteresting...even Terror 2000 could mete out far better, explosive riffs that what you'll find here. That said, if you wanna track down some passable 90s thrash before the style was officially 'cool again' (10 years later), Carnal Forge were on the scene.