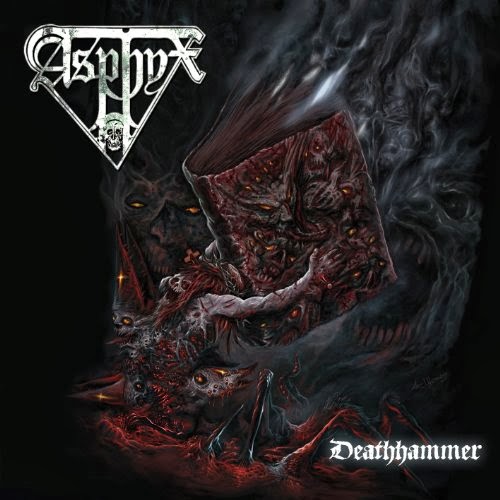 Deathhammer was one of those records which exploded upon arrival, seemingly all that anyone could talk about for a couple weeks, and seemed to reap in a lot of incredibly positive press. Occasionally mislabeled a 'comeback effort' (people must short motherfucking memories), it was the natural successor to Death...the Brutal Way and saw Asphyx once again dowse a pretty average set of riffs into a raw, phenomenal production aesthetic that dramatically increased their mileage. It's not a far cry in style from either of the first two Hail of Bullets records, to the point that I feel like the shared members must get confused when putting together their respective set lists, but where the riff progressions and grim, war-themed concept there really seem to come together for me, Deathhammer felt like it suffered from a bit of 'leftover syndrome'. That's not to say it's an album entirely without merit, because there's a genuine, hellish energy running through a lot of the track list that pairs up well with some of the more concise tunes, but considering how much buzz this had when it dropped like a bomb, I expected a whole lot fucking more...

Instead, it's basically a set of fairly traceable, predictable riffs descended not only back to the Dutchmen's own cult classics (Last One on Earth, or the unsung On the Wings of Inferno), but also Bolt Thrower muscle, early Death-like tremolo passages, Hellhammer chords and grooves, and there were even a few riff and vocal patterns (like "Deathhammer") where I kept thinking back to classic Slayer. There are a lot of samey songs throughout the album, in particular the faster 2-3 minute pieces, but these are fairly well contrasted to the slower, drudging chug or doom/groove fests such as "Der Landser", or "Minefield" which seemed like a mashup of Asphyx with Celtic Frost at points. Alas, I found the general rule here was that the slower the riffs moved, the more bare bones and boring they would become, to the point that several are really just 1-2 chords or notes bouncing around in repetition. Clever, but you're not the fucking Ramones! As a result, every time I felt energetically charged by this material, it would prove all too short lived...I'm fine with variation, I just wish that all the content, faster and slower, involved more creative rhythms and note choices which could keep me guessing. This is an effort that honestly seems to get by largely for the fact that the production of the guitars and vocals sounds monstrous, and that's a trend I've noticed a lot lately with many of the umpteeth-generation Swedish-sounding bands and Autopsy/Incantation hybrids...the 'sound' trumps the 'structure'.

But, hey, that's what a lot of death metal fans want, and it's not always a bad thing. An audience once hooked on expansion, experimentation and extremity seems to have settled into a desire for the familiar and inoffensive. I'm not entirely exempting myself from this, since I'm pretty evenly into both the old school and tech/death sides of the death metal medium, but I've always been about the songs first, and no matter how formulaic or 'sure bet' these entries to the Asphyx legacy were, I simply could not be bothered to remember them a mere 2-3 weeks after the album came out. Perhaps I was a little burned out after Of Frost and War, Death...the Brutal Way and On Divine Winds had come out, and this album didn't offer much more than reruns, but even listening to it now with a fresher perspective hasn't aged it very well. Tunes like "Into the Timewaste", "Deathhammer" and "The Flood" are all pretty decent, and I can't help but enjoy that fulfilling guitar tone, the vice-like potency of Bob Bagchus' drums, or even the simplicity about which they conceive a few of the riffs; but I always felt it lacked some of the emotive, crushing power of other recent recordings by some of the same members, and there were many times I wished the notes had just gone off in some other direction than taking the pretty bland, ordinary route that they do...

I don't wanna be too hard on Deathhammer, because it is indeed a successful enough record due to the production and presentation. I certainly like this as much as The Rack, or either of their mid-90s albums with the fragmented lineups. Most of the lyrics are solid, except "Deathhammer" itself which is a pretty typical 'get off my lawn' sort of thing where, you know, only the TRUE death metal bands rule and everyone else is a poseur just obviously in it for the money! That's right, dudes, tune in to next season of MTV Cribs where we'll get to tour the mansions and estates of chart-busting brutal death metal bands... A few of the lyrical themes feel a little redundant with the more consistently conceptual wartime accounts of Hail of Bullets, but Asphyx did it earlier. I also thought this was one of, if not the best cover arts Axel Hermann did for this band, and the Dan Swanö mix does a superb job at capturing that raw, visceral thrill of Last One on Earth and catapulting it forward 20 years, which, when you think of it, really seems to be the point of the whole album. Yet, there are some pretty 'meh' tunes throughout, in particular the pair from the Reign of the Brute EP fuckery early in the year, and this is just nowhere near the level I would have expected from the early excitement I experienced surrounding its release. It's great to hear a veteran metal band like this forging on in the new century, but I'd prefer they tried to surpass themselves rather than just play 'catch up' to where they already were at a younger age, and this doesn't quite do that beyond the advancements and availability in/of studio wizardry.