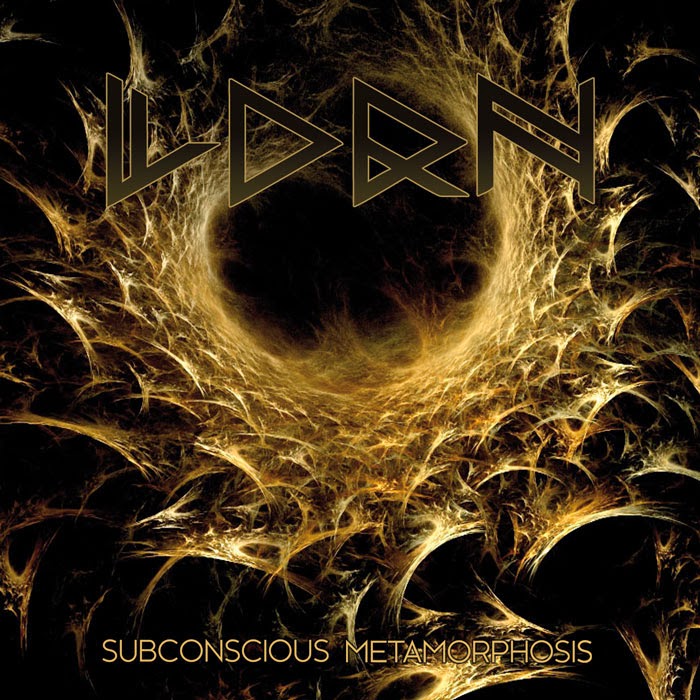 Lorn strikes me as a rather peripheral advocate to the black metal aesthetic, in that they texture chords and calamitous riffing passages together in such a way that bears only a cursory resemblance to many of the genre's forerunners. Certainly this is distinctly black metal in terms of its pacing, tremolo picking techniques and general claustrophobic sense of aggression, but it almost feels developed in some parallel universe. The high speed droning and bright buzzing of note progressions seems eagerly dissonant, and unpredictable beyond the fact that a number of the tracks create that same consistent sense of atmospheric discomfort, sort of like having 'the bends' in black metal. Like the hypnotic cover artwork, the more you listen through Subconscious Metamorphosis, the more it will draw you inwards, and while it's not incredibly memorable, it's also not the sort of experience you'll come out of any less fucked up than you were when you entered.

This is not a new band. I haven't had much exposure to their earlier album or split releases, but they're very much anomalous in their own country, where a lot of the artists (Mortuary Drape, Necromass) go for a more throwback sense of occult nostalgia. I might define this as bearing the modernist imprint of French acts like Blut Aus Nord or Deathspell Omega, in particular some of the chord choices of the former, but the ambiance and variation here are somewhat less far-fetched, even though they are present. Central rhythms are constantly being layered with all manner of other patterns and noises, to the point that it can be quite overwhelming if you don't set your attention span to absorb something 'more' than the conservative acts in this field would present you. Rhythm guitars bleed bright streams of effigy into your ears, almost like you were willingly blinding yourself by staring into the sun, and there's this near-constant backdrop of deeper geometry hovering at the edge of perception. Nothing is particularly 'warm' or melodic, but often they will go into scream mode, in which the dissonant picking resembles old, weird Voivod chords being jammed out with insectile, unfeeling precision...it really can drive you mad, which is why I was delighted when the lighter ambient piece "Fragmented Souls" offered some reprise in the middle of the track list, and was not alone; "Aeons Fears Part II" also featured some drifting, cleaner guitars and airy backing sound, and the closer "XXI" was pure, dirty industrial/ambiance that makes you feel at the center of some destructive cosmic event near the birth of the universe.

The drums are devastating, with a lot of crashing during the slower beats and then thundering when they ramp up in intensity; vocally, a little harder to describe...there are a few black rasps and some cleaner male and female soaring howls and shrieks that seem to blend almost seamlessly into the atmosphere created by the guitars, almost becoming more of a tonal instrument than a lyrical device. Where they go out on an even more experimental limb, like "Primera Alma" with its crashing, insane industrial percussion, the album grows even weightier in impact; that and "XXI" were strangely my favorites on the album, even if they deviated so slightly from the band's 'normal' formula...which, who the fuck am I kidding, is not even bordering on normal. I haven't the faintest idea which narcotics were consumed in the creation of Subconscious Metamorphosis, and it's not really the sort of record you can constantly loop in succession. There is nothing 'safe' or 'secure' in any of this, it slams your sanity constantly against perceived celestial bodies and really rather reflects mankind's smallness in this vast void of the unknown. And if those mysteries are anything like this music, then I'm not sure I want to know. Perhaps its best if we crawl back into our caves, cook our meat on an open flame and cease using utensils. This album is like the screwy end sequence to 2001: A Space Odyssey, where I'm really only at the level of artistic appreciation that the primates surrounding the obelisk might have held. That said, I promise you: crank this thing and there will be a great many 'what the fuck am I hearing' moments that you simply won't expect, even as I'm trying to warn you...