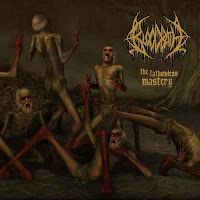 Now, I'm not normally the sort of 'center of the universe' critic who thinks entirely in absolutes and rants endlessly for pages about those opinions which deviate from my own. I don't haphazardly slap a zero on a record just because a friend of a friend's metalcore sister who watches MTV once said At the Gates sounded 'pretty sweet', nor do I shower glowing praise upon every 11th generational extreme metal record shat down the pipe, just because this or that forum/clique/club/a-hole thinks its cool to wear the patch this month. I know you've all got your Neil Diamond vinyls stashed away in that closet, fuckers! That said, I would find it incredibly difficult to take seriously anyone who can look me in the eye and tell me they think a Bloodbath album doesn't bring at least SOMETHING to the table that they enjoy. Again: no absolutes. They do not by any means write timeless, legendary albums like Left Hand Path, Realm of Chaos or Altars of Madness, but to deny that they've got their fingers on the blueprints to what makes an 'old school' death metal song sound brutal, fun and inspired without the usual stupidity would be a crime. The fact that they kickstarted the project well before whatever latest round of Dismember or Morbid Angel clones this or that cyber-posse holds dear this week, is just icing on the victim's corpse...

Sure, the Swedish veterans might have an inherent recipe for success. They probably have an advantage due to the members' participation in other, more financially independent acts. They may actually give a shit about not having the production sound like it came out of a dumpster in a trailer park, and have the means and connections to make it happen (even within their own foster). Yeah, so what? They put in the work those many years, and they reaped the rewards. The truth is, there isn't a member of this band who hadn't participated on some fantastic records long before this team up was conceived, and it's just not a surprise to me that I haven't met a Bloodbath long player that I didn't get a kick out of. 'Commercializing retro death metal'? With three full-length albums in 16 years? Hardly. At any rate, The Fathomless Mastery is another jewel in the crown of what makes this group so consistent. They care about what they're doing to the point that, even at their most conservative or uninspired, like a loping 2-3 chord groove which far too many bands have made entire careers out, they manage to put some small quality spin, be it a bend, measure-ending note choice, or a quick transition to snap the listener right back to intention and not repeatedly bludgeon him/her with the blandness. This is also a further transformation of their sound, and not for the worse: Resurrection Through Carnage was raw and primordial 1990 Swedish death metal, Nightmares Made Flesh took that and implanted a cleaner character with better riffs and structure, and this disc applies a slightly more polished sheen of technicality and variety which by no means detracts from the core concept.

Is it a paean to Dismember, Carnage and Entombed? To an extent, and that was clearly the impetus behind the band in the late 90s; but I actually got more of an impression of earlier Necrophobic meets faster Hypocrisy with some Grave-like grooves, with the obvious Floridian roots exposed (which could be said of almost any death metal group). Techniques are typical: memorable, textured tremolo patterns burst across the sepulcher-scape or slow to a mid-paced, churning cemetery swagger, while the grooves are well built but painfully simple, to the point that they're all going to evoke instant callbacks to the audiences' favorite genre records of old, without too much finger pointing. Pacing is evenly distributed in most of the songs, not to mention the album as a whole, and there's always going to be some rhythmic pattern in there that you didn't quite expect, to keep it fresh and imposing even when there's no denying its paraphrased origins. Mikael Åkerfeld's growling might not be to everyone's taste, but he definitely sounds more sinister and excitable than you'd expect given his more ponderous, meandering past gutturals over the harder Opeth material. Per and Blakkheim don't attempt to assuade the listener with their technical capability, but instead focus on rounding out each rhythmic script with stylish leads and what must be their clearest guitar tone yet, more on the level of the Unblessing the Purity EP than anything previous. Riffs and drums generate atmosphere through both their impenetrable, unerring confidence and just the right relish of reverb to tie it all together.

All without sounding wimpy, plastic, or over-processed. The chords still have enough edge to them that those into the older records, or really anything from the Swedish mainstays (Unleashed, Entombed, Grave, etc) would approve, and they certainly continue the Cannibal Corpse/Malevolent Creation influence that I felt pretty strongly on the EP. Renkse's bass tone here sounds positively livid even though it still tends to disappear into the rhythm guitar riffing patterns, and Martin Axenrot is nearly mechanical by this point, though he keeps the upper range of the kit splashy and rough enough to contrast the robotic consistency with which he hammers out the kicks and tom rolls. I personally enjoyed the constant, dour and melancholic sense of melody exploding everywhere...it only takes a simple stretch of notes to give the tunes that added depth. I also loved the tendency to briefly squirm into a more technical/brutal area with those mid-90s squeals built into the riffing brickwork/grooves ("Mock the Cross" being the prime example). So too must I point out for a band that was put together mostly for 'fun', the lyrics are just as serious as you'd expect from most top end death metal (Vader, etc) without traipsing entirely into torture/gore porn territory. Over all I'd consider them the equal of Deicide and Morbid Angel with a few memorable song titles like "Wretched Human Mirror".

This isn't quite as good as Nightmares Made Flesh, if only because the riffs on tunes like "Year of the Cadaver Race" are their best yet, but certain tunes here like "Mock the Cross", "At the Behest of Their Death" or the choppy, nearly djentish-prefaced "Devouring the Feeble" are all just as awesome as when I first tore the plastic off my copy, and I'd be hard-pressed to find a runt anywhere in the litter. So I dig it only a fraction less than the sophomore. It's death metal for just about anyone who actually likes Swedish, Polish or older US death metal, throwing in obvious nods to dozens of forerunners without trying to bite them off 100%. This isn't a case of 'let's remake Life is an Everflowing Stream or Dark Recollections directly, but chucks them into the same cauldron as a hundred other 1987-1995 inspirations and gets to work honoring in lieu of robbing. Bloodbath sounds like other bands, but it also sounds like Bloodbath. I could name two dozen trending underground heroes that can't say the same, and so could you. Well worth hearing, and if you've given the group a pass due to not digging Katatonia or Opeth or October Tide or whatever honest or political/scenester reason, then give them another try. There is surely some common ground here you'll enjoy whether you dub yourself a fan of new or old death metal.