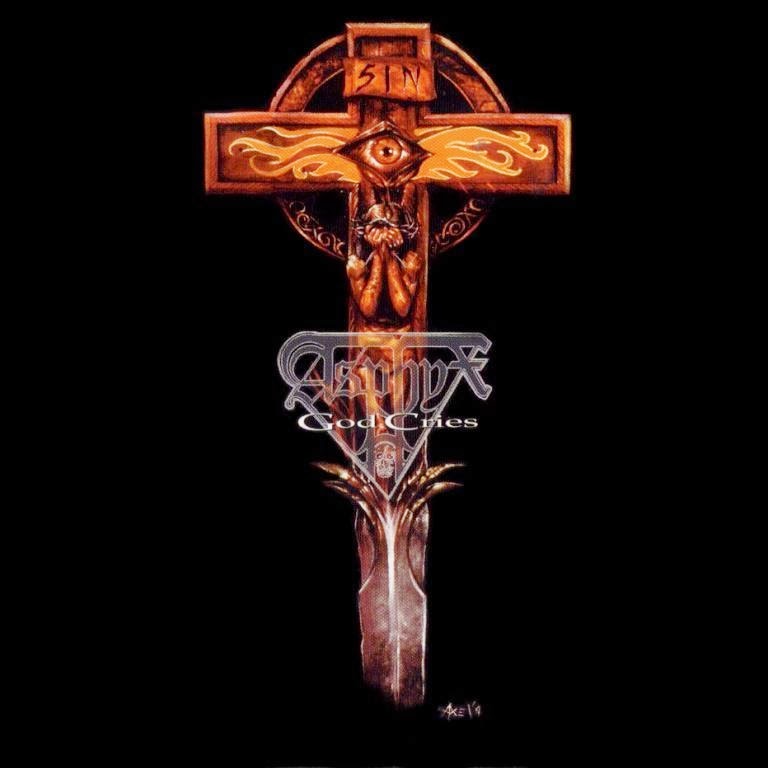 God Cries is often considered the career nadir for Asphyx. That's not an opinion I disagree with, but if I have to give it credit for something, it's the first of their albums that actually threw me for a loop, surprised me, and attempted something different. Granted, I struggle to remember songs off almost any of the Dutchmen's full-length works, and even now in the midst of reviewing their catalog I find a lot of their material slipping away. This is no exception, but at least I recall the first time listening how it threw me a curve ball, not unusual in the middle of the 90s when a lot of bands were experimenting with their sound or changing up styles completely. This is still identifiably Asphyx in nature, but it incorporates a lot more overt rock grooves and even a bit of a peppy punk influence in some of the faster paced chord progressions, like perhaps they had been listening to a lot of hardcore, groove and alt metal and wanted to branch out a bit of the morbidity into something more accessible...like Pungent Stench meets Corrosion of Conformity meets Helmet and then dowsed in 90s thrash and the viscera of Last One on Earth.

Might have had to do with the returning vocalist Theo Loomans, pulling triple duty with the guitar and bass; perhaps responsible for wanting a slight change in direction. Bob Bagchus spearheads this particular reunion (which didn't last long), and he admittedly is the strongest component here, with a powerful sound to his kit that translates into the kicks, toms, and a potent snare snap. The guitar tone is classic 1992 Asphyx and there are a number of propulsive old school rhythmic progressions ("God Cries", "Died Yesterday") which should ensure that the original Asphyx fanbase isn't completely alienated, but then you've got tunes like "My Beloved Enemy" which have these very basic, punk/hardcore configurations that wouldn't have been out of place on a lot of the 90s alt/grunge metal recordings. Not particularly inspired in terms of note construction, but the very fact that Asphyx continuously tossed these crests of gleaming chords over the grooves was a bit of a blindside, and even if the end result is probably their least impressive offering, it's not exactly the most disgraceful transformation of the decade...it's no Diabolus in Musica, Load or Risk, nor does it go the same distance as Morgoth's Feel Sorry for the Fanatic where they basically turned into later Killing Joke or Prong. It's almost like Asphyx took a few cues from label mates Only Living Witness who started off as a local Massachusetts thrash/hardcore band and then 'evolved' into emotional, wall-of-chord heavy rock.

I'm sure there was a contingent of the audience shocked by stuff like the aforementioned or "Frozen Soul", but Loomans and Bagchus make sure to leave in some death/thrashing, impulsive motifs redolent of Martin van Drunen's original tenure with the band. The production is fairly raw and atmospheric, not as dark and doomy as its eponymous predecessor, but it matches the brighter chords and the 'death & roll' pacing you get from a song like "The Blood I Spilled" which would have been a decent match for Desultory or Entombed during this same era, or Grave's Soulless/Hating Life period. Rhythm guitar tone is a meatier spin on Last One on Earth, but a lot more open chord patterns and less churning, grinding filth. Leads are bluesy and sporadic, bass is just sort of traipsing along with the guitar and not thinking for itself. As enthusiastic as the record was written in comparison to its gloomier forebears, most of these tunes are fleeting in nature, the sort you'd listen through once and have no real intention of revisiting. I'm not going to condemn Asphyx for its mutation like many others have, but ultimately it didn't produce anything of note, so it's no surprise this was quickly consigned to the bargain bins. Not exactly 'shit', but neither is it good. Heavy volume-wise, but not heavy in depth or repercussions upon the listener. If placed against Eric Daniels' lukewarm version of the band a couple years earlier, it falters, but I think this and that s/t are clearly the band's 'fucking around in the 90s' period and both could be safely avoided...all the other discs remain more relevant, especially in today's trending throwback death metal craze.