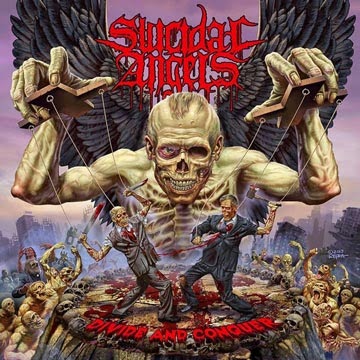 If you'd asked me five years ago, I might have written off Suicidal Angels entirely as another act jumping on the re-thrash bandwagon; but five records deep, with no sign of limp wristed pizza metal in sight, it's quite clear that would have been an unjust assessment. You don't go this far without a serious investment in what you're producing, and these Greeks have never fucked around on any of their albums that I've heard, a few of which I reviewed in the past and were admittedly decent. No, they're not great, not exactly full of unique ideas, and a lot of their riff patterns seem like facsimiles of West Coast rhythms from the later 80s, but one cannot accuse the Angels of lacking the anger, vivacity, or momentum to appropriate honor their forefathers. Through Divine and Conquer they continue to set that record straight, with a consistent 50 minutes of headbanging, and while they don't really surpass themselves, or even attempt to, this is nearly the equal of past albums like Dead Again or Sanctify the Darkness, the downside being that it's more of the same...and the returns seem to be diminishing with each new release.

This is punchy, polished and efficient economy-thrash the likes of which most resemble Exodus, Anthrax or Vio-lence on records like Fabulous Disaster, Persistence of Time and Oppressing the Masses, very much in that 1989-1990 epoch where a lot of the raucous, rawness of the genre had been scrapped in lieu of its success and bigger studio budgets. Tempos alternate between 'go for the throat' mid-to-fast paced trots, and then slower 'mosh pit' sequences highly redolent of classics like the "March of the S.O.D." or "Toxic Waltz", and almost anything in between is covered. They'll accelerate enough to prevent any sense of tedium to take over, but at the same time they never really push themselves beyond any limitations. We're not talking the unhinged speed and absurdity of a Fastkill, or the technical brilliance of a Vektor, but something more in line with Warbringer, Evile, The Haunted, Bonded by Blood or maybe even Dew-Scented with less of a melodic death influence in place. A few of the riffs have a melodic edge akin to the modern Artillery stuff, with lots of propulsion but little payoff in terms of replay value...that said, when you're in the midst of actually experiencing Divide and Conquer, it's hard not to have your neck tense up a little and ready itself for the strain...because Suicidal Angels are competent and cognizant of exactly what choir their style is preaching to.

Having a vicious vocalist is always a help, and Nick Melissourgos has an appreciably dirty inflection which is like a mix of Zetro, Tom Angelripper and Mortal Sin's Matt Maurer. Really, it's his presence mixed in with the guitar riffs that makes the album function, but I do feel like his barking is probably the only 'wild card' on the disc, and even that is a tightly controlled component. A lot of the guitars here simply never cross that margin of the 'been there, done that' which has sort of plagued the band since the start, and thus after hearing this album I found it a bit too interchangeable with anything I'd heard from them before, not to mention a lot of the other thrash revival acts from Greece, Spain, Brazil and the US like Released Anger, Angelus Apatrida, Aggression, Merciless Death, Violator and so forth. And, really, when we look back on these first two decades of the 21st century with regards to thrash metal, it's only going to be the bands that contributed the most savagely, technically or some sort of innovation to the field that we hold to memory, because otherwise there's no reason for us not to break out our genuine 80s classics, most of which were better composed in the first place. If it comes down to me spinning Divide and Conquer versus Bonded by Blood or Kill 'Em All, this is going to sit on the shelf forever. And that's just not okay, to be 'okay'.

There's a reason the more evil, blackened speed/thrash bands like Antichrist or Deathhammer kill so hard on a record...they don't hold back, whereas this album is a little too clinical and tidy to make a splash. Divide and Conquer isn't a record to change anyone's mind, and there's nothing much to dislike apart from its redundancy. The colorful cover art, serious and somewhat timeless lyrics, and tight musicianship continue to define these Greeks, but I keep wanting something more. Maybe a filthier mix, more explosive guitars, or just something I simply don't expect. If you really loved the last 2-3 albums these guys put out, then I can't imagine you'd wanna pass on this one, it's not at all fraudulent party-thrash or taking the piss. But Suicidal Angels can kick the thrash-ball around the field all day; sooner or later they need to score a goal or two, and this isn't even in the penalty area.