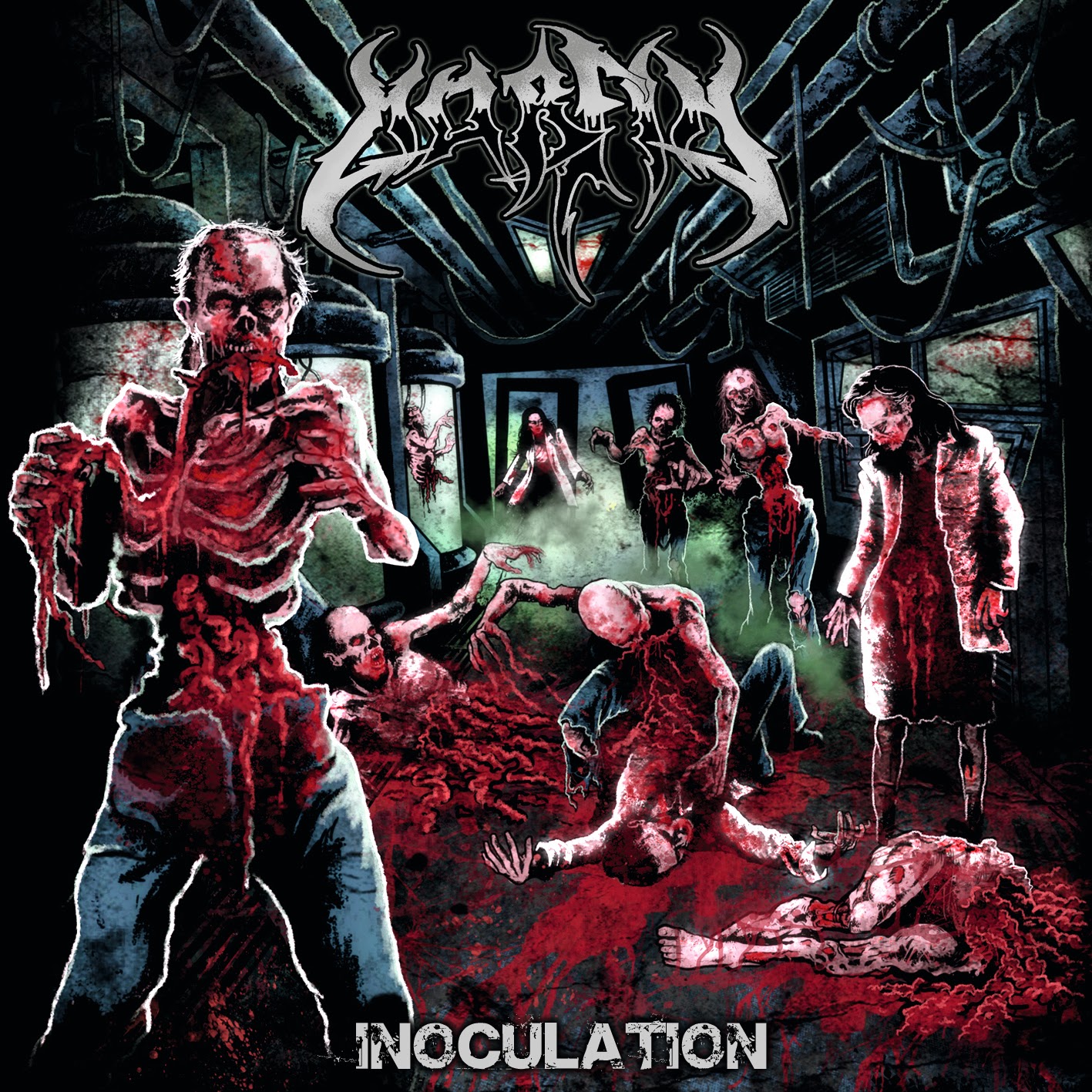 Unlike many death metal throwbacks of recent years, Californians Morfin choose to satiate their old school impulses by more directly revisiting their Floridian influences, or bands that were pretty early inspired by those same aesthetics. So if Inoculation sounds quite a lot like Massacre, Death, Obituary, Resurrection, Morgoth, (old) Atrocity, Autopsy or Gorguts, you can bet that it's probably not all that much of a coincidence. This debut sounds like it was written, produced and released around 1990-1991 at the latest, so I'll come right out and say that if you're in any way turned off by a lack of progression, athletic musical ability, and innovation in death metal music, this is just not for you. If you pine for that same feeling you had when you first peeled the shrink-wrap off your copies of Spiritual Healing, From Beyond, Embalmed Existence, Considered Dead, Hallucinations, Cause of Death, or Resurrection Absurd/The Eternal Fall, then Inoculation is not only in your clubhouse, but it's also eating your cheese doodles and leaving sticky, orange fingerprints all over your titty magazines.

It doesn't hurt that the ambient intro to "Evil Within" also sets up that same sense of post-apocalyptic/horror vibe that the cover implies, so you could see this as a sort of Return of the Living Dead/Resident Evil spinoff given death metal flesh. The deeper end tremolo riffs sound almost as if Scott Burns mixed them, and the bass has a really swarthy, but cleaner sound that also recollects a number of the aforementioned albums. Riffs are hardly inventive, they've got in some cases 30 years of history behind them, but without dipping into the oldies themselves, you simply don't hear a lot of albums that come along that use this sort of emulation. So many bands are off remaking Left Hand Path, Onward to Golgotha or Warmaster that it seems this antiquated cluster of formative, influential groups from the late 80s seem slightly neglected. If Californian bands like Skeletal Remains or Morfin have their way, that will all change, because they've got all the hallmarks of the style: brutish growls circa Schuldiner/Tardy/Reifert, tight and functional rhythm sections that keep to the script instead of flying off everywhere impulsively, and dank, clinical riffing cycles that sound genuinely eerie and alien...I really feel like I'm in the middle of a zombie outbreak in the late 80s, with no cellphone to phone for backup, so I'll just have to grab the nearest fire axe and...make a path.

Granted, not a lot of the tunes here have the same level of catchy picking that defined the first three Death records, and they thrive off precedents rather than creating them, but Inoculation is entirely well performed, even down to the leads which flirt within those old school progressive/death metal parameters while wailing another atmosphere dimension over the solid backing rhythms. The vocals are brute and ugly, the harmony riffs are quite surgical in nature, and there's nothing 'warm' or comfortable available musically. I could do without the bass solo track ("Primordial"), which seems to stick out a little too much, though if you think about it, so did "Anaesthesia (Pulling Teeth)"...well, this one isn't that. The "Leprosy" cover also seems a little too obvious, and also plays it far too straight, without making it their own, though that would be hard when their 'own' is more or less a facsimile of that sound to begin with. But other than those two tunes, the eight originals all deliver on the premise of the band, which is to pay homage to this specific style which is simply not commonplace amongst all the retro-death so in fashion today. To that extent, I did enjoy it, probably not as much as Skeletal Remains' Beyond the Flesh, but for about 35 minutes of this material I felt like I was a 14 year old again in 1988, and I don't disapprove. If only I had the hair back! Gods, the hair...but it looks like the members of Morfin have me covered there, too.