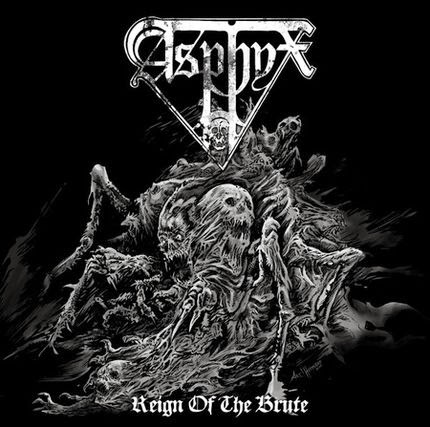 Class, what a useless fucking release this was. Raise your hands if you can't wait roughly one month for the new Asphyx record? Okay, one in the front ro...oh, you're changing your mind and putting your hand down because no one else raised it. Right. Now, raise your hands if you love to collect vinyl? I see, a lot more of you this time. Well, I'll tell you who else loves vinyl. The recording industry, because, you see, they can fleece you with shit like the Reign of the Brute EP and then double fleece you again when the full-length comes out. Enforce scarcity with a limited edition 7" release (I think there must have been around 500 of these pressed), incorporate nothing of value. It's not the same case as a split, or a demo, or an EP with material unique to the 7", which are all fine. In fact, what if I told you that you could have the 'bonus' content from this on the limited edition of the Deathhammer full-length?

Now, I've got no major issue with the two songs here, brutal and furious modern Asphyx with largely the same production values as you'd have expected if you'd heard Death...the Brutal Way or the Hail of Bullets debut Of Frost and War before this. Raucous, aggressive guitar tone which can compete with both the Asphyx/Autopsy of old and all the Swedish crust in the world. There's nothing remarkable about the riff progressions, but was there ever? Not exactly, so it's the production here, as well as Martin van Drunen's ghastly vocal presence that really drives a tune like "Reign of the Brute" home. "Der Landser" is slower, longer and more calculated, but not much more impressive in note selection, just a lot of simplistic chugs that repeat themselves and you know where they're going at any given time. This is the German version of the song, not available on Deathhammer proper, which I suppose might have been a 'selling point' for the 7" if it wasn't also on the limited edition CD! On second thought, no, not a selling point at all, and the greater issue is that this wasn't like they put out two songs and then included them on an album six months later so the fans who didn't get one in time could have them...this was all pre-calculated, commercial nonsense. Pure product.

So the songs are nothing to write home about, not exclusive, going to be released in a short span of time with more songs (some of which are better). What else does the Reign of the Brute 7" have going for it? The Axel Hermann cover art (which earns my entire score) just seems pretty piecemeal with that of Deathhammer itself, and there's no other content worth a damn. I wouldn't mind an entire Asphyx/Hail of Bullets war metal record in the German language; it's appropriate to the lyrical content and context, and I sometimes prefer the sound of it myself. But I can't say that in this case it feels any more potent than the English version, so this sort of 'bonus' is fleeting at best (even when Manowar does a whole CD of a song in every language they could translate it to) and mostly just bullshit. Ultimately, Reign of the Brute is just a cheap cash-in on a trending musical format and the popular resurgence of an old school death metal band. Don't encourage this crap! Avoid! You'd be better off kicking a few bucks to a charity or saving towards the next time you're headed to the Nederland for some coffee.