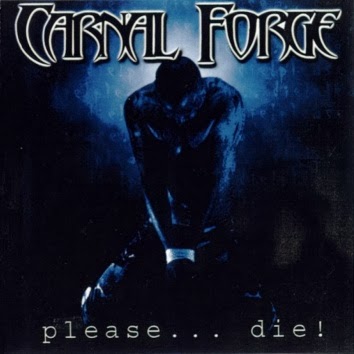 I wish I could tell you that the lamely titled Please...die! was the point at which Carnal Forge 'hit their stride', but in reality it was hitting the same stride that both its predecessors had already braved. However, based on strengths of riffs alone, this was easily the best of the Swedes' efforts to its day, and clearly something that would appeal to fans of similar efforts like Darkane's Rusted Angel, Soilwork's Chainheart Machine, At the Gates' Slaughter of the Soul or even The Haunted Made Me Do It. It retains the modernization and punch of Firedemon, but riffs and melodies are composed at a more memorable level that lends the record a greater replay value, without sacrificing the frenetic, 'hyperthrash' pacing and energy that was the chief selling point of their older material. The logo and cover art remained fairly uninspired and insipid, but the tunes work better because the notes fall into more interesting patterns here, and that always makes the difference.

Some of the better concise, blistering short-range pummel-thrash pieces of their career dwell here, like "Fuel for Fire" or "Slaves" which balance clinical muted picking patterns/harmonies with the unfettered vocal howls of Jonas Kellgren who really does sound like someone crossbred Speed Strid and Tomas Lindberg with a pair of German Shepherds and then let them off their leashes at the listener. He uses a lot of 'gang shouted' layers panning at you from multiple directions, and they work decidedly well with the clean, machine-like chugging engines of the rhythm guitars, which if they went much further during some of the more mid-paced sequences might veer off into a djent territory. They're polished, but somehow possessive of this depth and richness on a song like "Becoming Dust" that Please...die! almost seems like a marvel of production, that is of course if you don't hate the shinier finish of 21st century-style recordings on sheer principle. The bass guitar also really hits a good tone here; perhaps the lines themselves aren't always that distinct, but the sound is strong and fully complements the impact of the guitar, while Stefan Westerberg sounds about as consistent and hard hitting as he was on Firedemon. The melodies present are very much redolent of Darkane and At the Gates, but that would only be a bother if I didn't enjoy those bands at their primes (spoiler = I do!)

Ultimately, this is a case where I do feel the production is stronger than the songwriting, but that in of itself is an improvement over what they were able to come up with earlier. These aren't the sorts of riffs that will come to mind a decade or even a month after you first listen to the album, but at 36 minutes this is basically a welcome rush if you've got the energy and attention span to appreciate this sort of harried, premature thrash ejaculation which generally fills out about 2-3 minutes of excitement and never gives itself a chance to wear out its welcome. They took a few years to get there, and weren't helped by the fact that countrymen like Soilwork and Dark Tranquillity were putting out truly incredible melodic death records (Natural Born Chaos, Damage Done) that dwarf something like this in terms of ambition and effectiveness; in fact, this disc went by in a flash and nobody seemed to really notice or care, but I give credit where it's due. It's far from perfect, and not their best album (that comes later), but Carnal Forge definitely secured themselves in that 'second tier' of Swedish death/thrash or melodeath with Please...die!, as perhaps a band that one shouldn't just write off based solely on its lack of uniqueness. Serviceable, hard and fast, post-millennial thrashing.