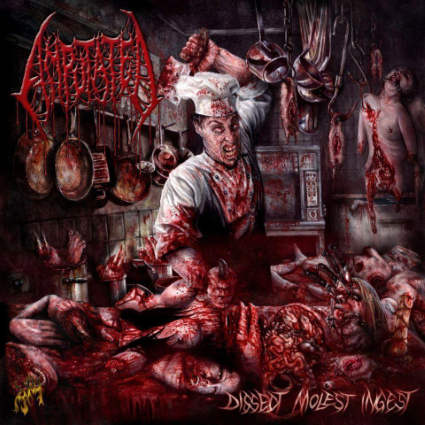 England's Amputated is a band which, in the past, struck me as having a lot of positive traits for brutal death metal without ending up particularly memorable on the whole. Wading Through Rancid Offal, for example, had one of the better cover artworks in the entire niche, impressive production standards, fun song titles, samples to make the squeamish squeam, and no shortage of musical competence and aggression, but with all that...it just fell short of resonating with me. Hell, this band also had an album called Gargling With Infected Semen, so naturally I feel compelled to root for them regardless of the outcome, and I'm elated to report that the third time out, Amputated has finally turned that last corner to create something with a lot more replay value.

No, they haven't added a heap of melodies or catchy choruses in there, this is still largely in a gestational period between mid-90s Cannibal Corpse and more contemporary brutal/slamming death metal; you've got a lot of chugging-based riff progressions peppered with squeals and trills, and contrasted deep guttural and grisly snarl vocals weaving a trail of eviscerated flesh together. But, like another UK band I've been admiring (Ingested), these guys have uncovered the secret to having a great balance of entertaining grooves and more uptempo material. Of note here is the jubilant popping tone of the bass guitar which gives the whole affair a sort of tongue in cheek quality, but more importantly the tacit punctuation of the rhythm guitar and the utter remorselessness of the drumming when they dial up a ferocious double kick fill ("The Local Flavour") or just outright blast ("Subatomic Insemination")...it's like concrete being poured over a stash of murder victims. There's also a surgical level of detail to the guitar techniques which will recount not only the aforementioned Corpse as they transitioned from the Barnes to Fisher years, but also some Suffocation, Mortal Decay and many other top and middle shelf US brutes.

Lyrically they're not about to stand out from the pack, but you knew that the first time you laid eyes on this. 'Odes' to body horror, cannibalism, mutation and murder abound, and the cover artwork is once again excellent in prefacing the experience you're about to have, since the music truly relays the dynamics of a butcher knife rising and falling as it chops through meat and bone. Amputated are generally quite concise, but still pack a fair number of riffs into each composition that you'll never become weary, even when they 'extend' outward to about 5 minutes with "Toolbox Abortionist" (much of which is an outro sample, admittedly). The tremolo patterns interspersed amidst the cement slams are a mix of clownish and evil note selections, which ultimately reinforces the pervasive sense of serial murder glee. There isn't a damn thing anywhere on the album that I'd consider truly original or essential for the genre, yet Dissect, Molest, Ingest is a tighter and more effective experience than even its predecessor, which was well on its way to being so. Not nearly perfect, but good enough stuff if you just wanna kick your feet back and dream about how you'd carve up your...I should go no further.