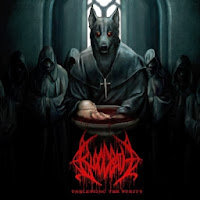 Unblessing the Purity was the first release in a busy year for the Swedish all-star death metal project Bloodbath, which alone would have made up for the four-year hiatus since Nightmares Made Flesh, but I'm happy they didn't just stop here. Four tunes, and a superior short-player to their original Blessed Death EP in both composition and effectiveness, really refining this group's ability to draft a death metal tune with some depth and melody that celebrates the original influences to which they pay homage, without proving too much of a direct ripoff of any of their countrymen/forebears. After hearing this, I was extremely stoked for The Fathomless Mastery, which did not disappoint, and it's yet another reason I actually wish Bloodbath was 'mainlined' by its constituent members, instead of being this project that gets shelved for large periods of time (the current hiatus having lasted around five years). Then again, if they were churning out discs annually or bi-annually, they might not be so good...but they don't seem to have come close to exhausting their riff stores yet.

Anyway, Bloodbath might lack a little in the creative department, and that was the point since inception, but the amount they are called out for it seems quite disproportionate when one considers that their most vocal detractors spend about 50% of their time listen to direct knockoffs of early 90s black/death metal. It's okay to do when you're on some smaller cult label and pulling in audiences of 15 at a gig, but not when you're a member of Opeth or Katatonia! Rrrrriight, and let's not forget, forming in 1998, Bloodbath were already well ahead of the game, in some cases only 5-6 years after the records they were worshiping! Sure, there isn't a lot here that you wouldn't have already heard on a Dismember, Carnage, Hypocrisy, Entombed, Edge of Sanity or Necrophobic record over a decade before this, but Unblessing the Purity doesn't seem so much like recycling as rekindling its beloved influences. You'll immediately notice a more mature structure to the songwriting which doesn't seem like a repeat of Resurrection Through Carnage or Nightmares Made Flesh, with a busier use of melody as an atmospheric ingredient (as in "Weak Aside"). The rhythm guitar tone isn't quite so concentrated on being ripping and raw in the traditional Sunlight fashion, but dialed back a little in the mix, which fits the more intricate picking of a lot of riffs here. I've heard this material described as more 'technical' than the prior albums, and that's not a false statement, but it's not to the degree where they're exploring the clinical/tech-death brutal death metal indulgence...this is very firmly old school death metal, it just doesn't settle for being so simple that it borders on stupid.

Guitars, guitars! Tunes like "Blasting the Virginborn" really capture a lot of versatility, from the unapologetic Krisiun blasting of the opening riff to the death & roll grooves and bluesy but cryptic lead passages, while others like "Sick Salvation" seem like they're just dowsed in an added dimension of constant atmosphere being provided through the reverb on the drums and guitars. There are a lot of chug-to-trill rhythms that are redolent of Cannibal Corpse's cult favorite The Bleeding, and Mikael also seems to channel a little of Napalm Death's direct vocal gruffness in places. Not every riff is a winner, but the majority of them fit together snugly and constantly offer the ear something fresh and potentially unexpected. Renkse's bass lines sound better here than I think I've ever heard them before (at least in this band), with a balanced distortion to them that never seems over the top, but keeps them heavy and grating against the clearer presence of the rhythms. Axenrot sounds fucking unbelievable, especially on a lot of the slower grooves where's he complementing the central rock beat with faster double bass and then seamlessly introducing blasts and breaks. But really, Bloodbath always thrive off their guitars more than anything; both Blakkheim and Dan Swano's replacement Per 'Sodomizer' Eriksson (Katatonia, Genocrush Ferox) deliver constantly thrills.

The ambient touches, like at the close of "Mouth of Empty Praise" with the male chant, are well enough implemented that I'd have enjoyed hearing a lot more of them, and the lyrics, while often minimalistic, are pretty blasphemic as a rule here..."Blasting the Virginborn" calling out Christian falsehoods, and "Mouth of Empty Praise" offering lip service to a number of infernal figures. Almost to the point where it feels like there is a more cohesive concept happening than your usual Bloodbath record, which happens to reflect the cover artwork quite well. It's not perfect, but just fucking great, well-rounded death metal that I enjoy time and time again, like anything else they released after Breeding Death, and if you've been on the fence due to not liking the higher profile bands of several of the members, trust me when I say this is probably much more your style. In fact, I like Bloodbath more than anything Opeth has released since Blackwater Park, and even a number of the Katatonia offerings, so I really do wish they'd put out something more often...even if they don't reach the level of productivity achieved in 2008. Anyway, Unblessing the Purity is killer and just as worth owning as any of the full-length efforts.