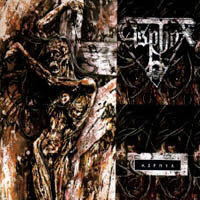 Conceptually, the Crush the Cenotaph EP was an opportunity to draw on a few of the older Asphyx tracks (from the 1989 demo of the same title), re-recording both the music and vocals with Martin van Drunen; to also give the fans a sampling of what was to come on their sophomore Last One on Earth, and lastly, slap on a few live offerings. So at the time, one might consider it a sort of 'past, present and future' celebration during a time when this was quite a standard setup for the EP format, across multiple musical genres. Of course, this often led to a feeling of disjointedness when listening through, since the audio quality was very unlikely to be consistent, thus I'm not the biggest fan of these short players unless all the content is on the same 'page': new studio material, all-live, all re-recordings, etc. But I probably threw down only about 4-5 USD on this in a bargain bin somewhere, mainly to experience more van Drunen vocals and because I though Axel Hermann's artwork was quite sick. Otherwise, my expectations for this were pretty humble...but not met regardless.

Production-wise (courtesy of Waldemar Sorychta), I actually enjoyed the re-recorded versions of "Crush the Cenotaph"  and "Rite of Shades" more than anything off The Rack, largely because the guitars seemed a little more rich and robust in tone, if sacrificing some of the futile fuzz and tension off the full-length for clarity. Thanks to this decision, Martin's ghoulish vocals seemed to splatter all over the rhythm tracks like viscera to a polished and sharpened knife, and I also felt like Bob Bagchus' drums stood out more evenly than the album. Bass is roughly equivalent, perhaps a bit louder, and the leads really tear up the scene where they appear; the guitar riffs in general just seem more muscular and potent than so many I had been disappointed with on The Rack, even if these are not incredibly memorable death metal tunes for the time, but rather on the primal level of what bands like Cianide and Cancer were coming up with during the same period. "The Krusher" was mildly catchier, if not impressive, with a nice death/doom lurch to it that got along well with the grotesque vocal lines, and so it did generate some positive portents for Last One on Earth, an album I ended up enjoying more than the first. I must say, though, that nothing here is necessarily spectacular and the EP doesn't have much value beyond that of a collector's piece or for anyone who REALLY WANTS to hear the demo cuts 're-imagined'.

As for the live tunes, both ("Evocation" and "Wasteland of Terror") are off The Rack and seem quite vibrant from a Stockholm gig. I have long believed that the simplicity of Asphyx' material would lend itself better to the live setting, and this confirms it, because neither track sounds as laconic or impotent as the previous studio recording. The drums have a lot more pep, the guitars fuzzed the fuck out and van Drunen sounds absolutely fantastic here, on both the bass and microphone. That lead in "Evocation" sounds somewhat transcendent here, but even if the majority of riffing selections are still pretty barebones for early 90s death metal, I feel like they would have been fairly fun to watch. As a result, Crush the Cenotaph seems like pretty solid fan bait, just not something to go out of your way to acquire unless you can conveniently get the 2006 Century Media reissue of Last One on Earth which includes both this EP content and some other early material. Musically it's not so grisly as the cover artwork would imply, but then anyone who hear The Rack probably wouldn't be expecting anything more than stock death metal with a few morbid, doomy hooks. Asphyx was not yet living up to the hype that succeeded them 15-20 years later, but in my opinion they still haven't, so this isn't something that I often, or really ever have the urge to listen through.

Verdict: Indifference [6/10] (frenzied eyes look into the past)