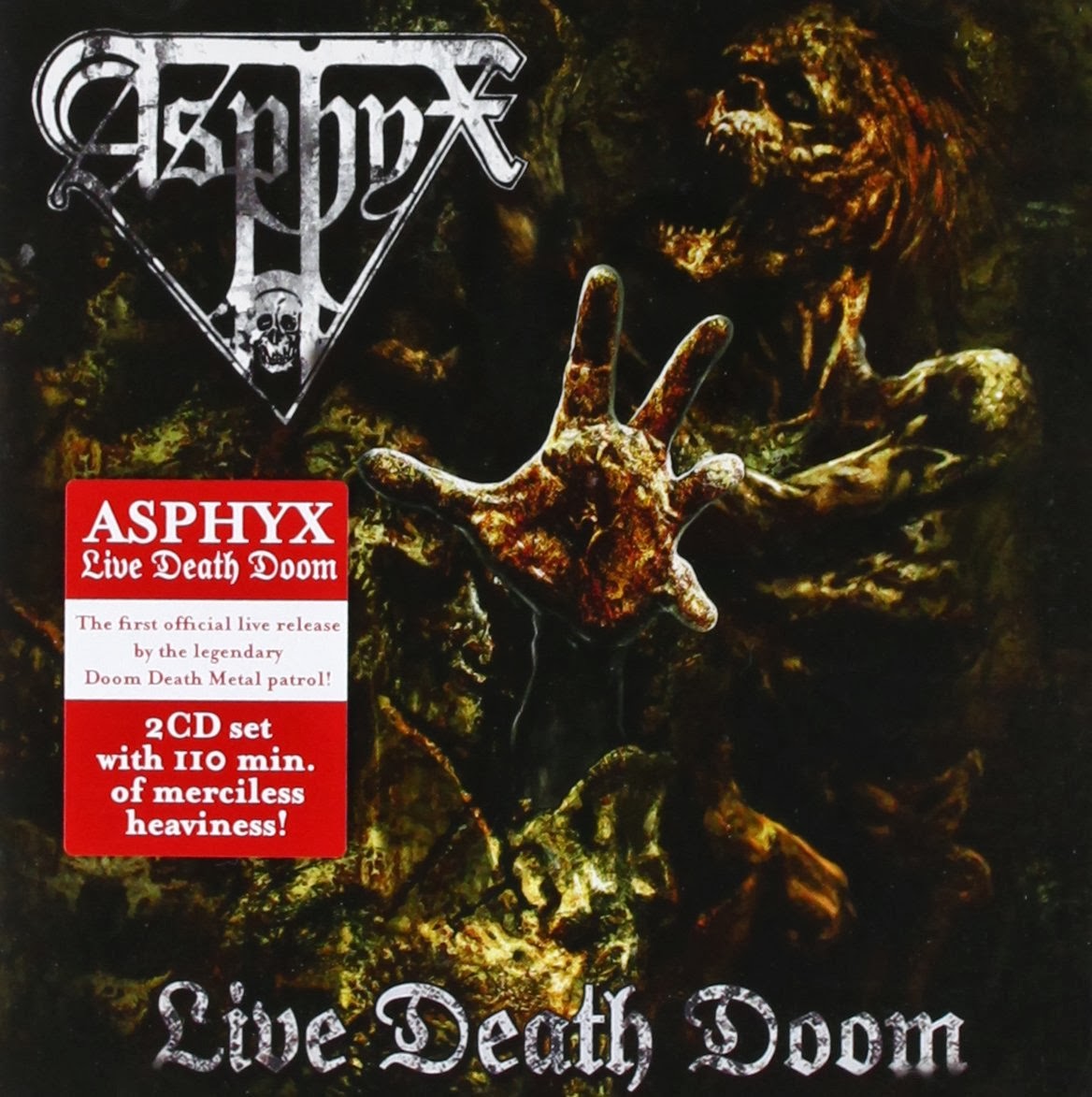 I've been ruminating a lot lately over the relevance of the live album in the 21st century, or how it pertains to my own life in particular. With the advent of high definition live content (DVDs, Blu-Rays, Netflix, etc) so readily available, and such a massive collection of studio music to listen through, with hundreds of new bands/albums each year, I find that I'm just not as capable of making the time for the audio-only experience. Back in the day, I loved me some Live After Death, Unleashed in the East, Live Without Sense, or KISS' Alive when cruising around in my teenage cars, or delivering newspapers while I would dream of being somewhere else; but having that visual stimulation is such a component of going to a gig that I'm not sure I want to do without it any more. Yeah, that's right, I no longer buy the things (unless they come as a package with the DVDs), but for the purpose of writing up discographies I'll still sit through and include them where applicable.

Live Death Doom was Asphyx' first foray into the medium, and they did not fuck around, with two discs and two hours of material recorded in Germany just after Death...the Brutal Way had been released. So we're talking Marvin van Drunen and Bob Bagchus back in the lineup together, the band finding its 'second wind', more accurately their fourth or fifth wind after all the brief breakups and reunions of the nineties and 'oughts. The time was really right, a period of celebration for the band's renewed productivity and dedication and just having issued the first studio album in nearly a decade (and a good one to boot), so why not? This wasn't some hack investment early on into their career, they had existed on the consciences of death metal maniacs for two decades, and I'm sure some fraction of them were pining over a package like this. Granted, we're once again faced with the realization that the audio-only release has nothing on the DVDs, where you are getting not only the live footage but some documentary/interview content that ultimately appreciates the value (if DVDs ultimately have any), a more fulfilling interface for the diehard audience. So if you're gonna spend the money, do it on that version, the Hordes of Disgust documentary being the most fascinating since they go into a little detail about the earlier years of the band in the late 80s.

In terms of production, the sound here fell a little flat for me...once the band is firing on all cylinders, it seemed to me like some of the dynamics get lost in the performance...I guess for 2009-2010 I was just expecting something a little more high-tech. You can certainly feel the fuzz and power in the music when there are some punctuated starts/stops, intros of particular songs, etc, but very often the instrumentation all kind of runs together, and considering that I was never the biggest fan of the group in the first place, so too do the tunes. But that's not to say it's an uninspired performance: the crowd seems to really get into it, chanting and/or howling along in response to cuts like "Asphyx II". The drums are really raw, but you can make out all the higher and lower end signals of the kit evenly, while the guitars seem to dominate, reducing the bass-lines to a mere puddle of groove or depth that hangs on the edge of perception. Lots of feedback and fiber to the riffs does give one the impression of being at a gig, which is fine, but I've just heard far better mixes on live recordings that feel more stereophonic, panned or coming at me from all angles, where this doesn't. Van Drunen sounds gruesome, and the band plays tightly through both the older and newer content, but I don't know...maybe an additional guitar would have made it more powerful, this seems a little dry despite all the saturation in tone.

Track-wise, this isn't a selection the fans are like to scoff at; Asphyx reaches back to oldies like "The Krusher", "M.S. Bismarck", "Vermin", "Rite of Shades", and even a full version of "The Rack" itself. No "Crush the Cenotaph", somewhat surprising, but it's available (another German performance) on the DVD version. The "Abomination Echoes" instrumental is present in the set, from the eponymous 1994 album, also surprising since I don't think any of these guys were in that lineup. Thankfully they omit material from the God Cries disc, which they apparently liked about as much as I did, but I was not so thrilled by the lack of On the Wings of Inferno material. One of their better albums, why ignore it when picking the set list? So then there's a whopping seven tracks from their new release (for the time) Death...the Brutal Way. Yes, 40 fucking minutes of material from an album that had dropped about a month before this was recorded/filmed, they might as well have played it from front to back! Honestly, wouldn't have minded dropping 2-3 of these out and including "For They Ascend..." or "The Scent of Obscurity" or something. Hell, Wayne and Bob are still in the lineup. At any rate, those 1994-2000 albums weren't popular whatsoever, so if they're playing to an audience stoked on hearing the 'classic Asphyx' it would make sense to leave those off (if any), since Death...the Brutal Way was more or less Last One on Earth II: Still on Earth.

Live Death Doom doesn't leave much of an impression on me in this audio format, primarily due to the production/mix. I didn't get as much value as the studio albums (On the Wings of Inferno, Death...the Brutal Way, etc). If someone had given me the choice to 'be there' or own these CDs for the rest of my life, I'd prefer the former. But for German/European fans in the crowd, it was an opportunity to catch up on a band many might not have seen in a very long time, and have most of the sacred slaughter-songs performed with 2/3rds of the classic roster that many hold above any other in the group's history. Don't pay money for this if you can also get the DVD, it's worth the difference (and consider my score for that package either a full point or 10% higher), but certainly this wasn't a 'cheap and easy' live recording. They took their time getting one out when they might have padded their earlier contract with one in the 90s, and thus it seemed inevitably better worth the cash when it did arrive.