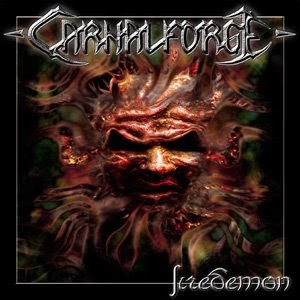 Oh damn! Isn't this, like...the SAME fiery demon face that was on the cover of the first album? Here he seems a little more...refined, though the image is equally as ugly and hopefully whoever did the art direction for this and any other Carnal Forge record had a pretty short stint in the medium, or at least improved dramatically elsewhere. Ultimately, though, it's the label and band that should know better, and these are the same sorts of hacked computer edited cheese graphics that plagued a lot of records when people were dicking around with things like the 3D, chromed logos and so forth. Those were like the neon lights over dingy bars in the 90s. Just think how much better it would have looked with just an honest two dimensional scrawl of the same logo!?

Otherwise, Firedemon is really more of the same on the debut, pulverizing hyper thrash sauteed in the more intense riffing patterns favored by other bands who were modernizing the field with a death metallic edge. I felt this was a tighter record than the debut, and the songs a margin more effective, and minimally catchier, but the vocal style and rhythm guitar progressions were in some cases were interchangeable with those, or even quite a few of the Terror 2000/(early) Soilwork songs. Palm-muted, muscular renditions of popular West Coast US thrash in the late 80s/early 90s, in fact a number of these tunes would have fit in quite seamlessly on an Exodus album fronted by Zetro or Rob Dukes, or a new Vio-lence album. Or almost anything with Marco Aro singing, but I'll put that grief away for another day. Bottom line: competent and violent riffing, which is at the very least consistent through the dozen cuts, and occasionally capable of a dissonant or melodic surprise, but largely moving along at the same breakneck clip like a drag race through Stockholm, with testosterone as fuel, and the grand prize being an autographed, limited edition Slaughter of the Soul poster. Sadly, this doesn't have the memorable compositions of that disc, or Rusted Angel, or Steelbath Suicide, or really most of the group's comparable countrymen...

It's not terrible, and I thought the bass level on the album was dialed up a little to kick you in the gut all the harder. Group vocal/gang shouts seem a little more prevalent, and the guitars meatier and easier to make out, not to mention more athletic (again, a lot of patterns quite akin to what Soilwork started out in). It's 'wild child' thrash metal that sounds like it was often performed while drunk, thus the broken glass in the tune "Uncontrollable" is pretty accurate to the aesthetics throughout. It features a pretty damn solid performance by drummer Stefan Westerberg, especially with his toms and kicks being so loud and proud. The pure chugging sequences which are still often indulged in are also better conceived and more energetic than the debut, the handful of death metal tremolo passages more pronounced, and really it exceeds Who's Gonna Burn in every conceivable department, the exception being a few lame, thrown-together lyrics; only it's still just not a 'good' album beyond a pure pummeling parameter or the production values alone. Short and to the point, perhaps, but when it's a point that has already been made a number of times at the same meeting, it loses some of its weight.