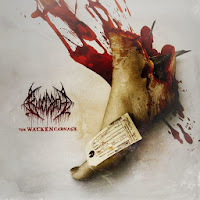 Popular bands = lame. I get it. Bands made up of dudes from various popular bands = DOUBLE LAME. Loud and clear! Just wanted to get that out of the way for all the closet trolls up front, and then to deliver a nice swift FUCK OFF! If you've written off Bloodbath for this reason, it's not my loss, because there's nothing more or less here than a group of skilled musicians & friends having a great time paying tribute to a style of music they love, that gave most of them their start, and writing some damn catchy tunes in the process. 2008 was a particularly great year to follow the Swedish 'supergroup', not only for two new studio recordings (The Fathomless Mastery and Unblessing the Purity), but also because they would unleash a pretty goddamn great sounding live album. In fact, I would not be exaggerating to claim this was one of the better produced and paced live sets I've heard on CD from any band in the genre...

There is the caveat that this was a little late in coming, recorded back in 2005 at Germany's metal Mecca and then mixed in 2008 for release, but it sounds just as effective in 2014. There are also the limitations most of these recordings present, in that you'll have to use your imagination to picture the band on stage, but you do also get a DVD included for when you're not listening to it in the car...thus The Wacken Carnage is already one step ahead of many of its peer releases. In fact, I doubt I'll ever purchase another live album which offers anything less than this very format, even if if sounds as fantastic as this one does. Now, this was the 'classic' Bloodbath lineup, with Mikael of Opeth handling the vocals, Blakkheim/Swanö on guitars, Renkse on bass and Axelrot on drums, so if you're not into Åkerfeldt's growling in comparison to his later replacement on Nightmares Made Flesh, I can understand some hesitation on hearing that material, but trust me when I say that the guy sounds fine and it makes little difference. What really took me by surprise was just how pungent and fuzzed out the guitars here sounded, just as much as either of the earlier studio albums and they frankly sound as clean as a studio overdub...to the credit of the band's stage techs and the mixers and engineers who worked on the final product. I suppose it's so thick and consistent that there lacks some dynamic range through the performance, but it's not necessarily a band I approach with that in mind...

Granted, the band had a limited amount of material to work with at the time, only the debut EP and two full-lengths under their belt, but they compact it all down to a 13-track extravaganza with nary a stinker in the lot. Even the Breeding Death material, which I consider their weakest, gets a nice injection of life, and it's represented in its entirety, with the rest of the set leaning more heavenly on Nightmares than Resurrection Through Carnage (sensible, that was their 'current' album for the performance), six choices from the former and three from the latter. There are some pretty glaring omissions, like "Year of the Cadaver Race" which has some of the best riffing they've ever written hands down, but I'm not complaining about what they muster up, and tunes like "Outnumbering the Day" and "Eaten" are practically worth the price alone. The drums pop right atcha, the guitars richer than hi-fiber oatmeal, the vocals pretty nihilistic and blunt though I can't say much for Mikael's on-stage personality (even when I've seen him with Opeth). Jonas doesn't develop much of a presence through the recording, but then even on their studio albums the bass is subordinate to the rhythm guitars so it wasn't like I expected much more. The tremolo melodies also don't stand out very much, often as gloomy as the chords, but these are really the only production issues and it's still vastly superior to most live sets I've seen or even heard from festivals...

The DVD is a little better yet, because you can see the guys traipsing around in their blood-spattered whites, but it's more impressive just that they're actually playing as tightly as the audio translates. I'm just used to hearing more flaws in a performance, but then it's probably not the most difficult material to reproduce for any of the involved parties. If you DO like randomness, jamming, inconsistencies, then admittedly this might not be for you, and if you hate Bloodbath to begin with then it goes without saying, but I have no regrets about any of the purchases of their stuff I made that year, and if you're down for some punchy throwbacks to the sounds of Dismember, Entombed and Unleashed in the early to mid 90s which don't sound as if they were recorded in a latrine, then these guys come immediately to mind. Nothing new or original, but they can write a goddamn riff that I'll remember 5 years later. Hell, 10 years. The Wacken Carnage isn't a purchase I'd make over any of the three studio full-lengths, but unlike some live recordings, I did feel that you got what you actually paid for.