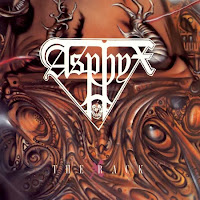 Most New Englanders get their rectums sore when one of their favorite athletes gets traded away to a rival team, but for myself, the hemorrhoids begin to flare up when an idolized metal musician is sent off to another 'franchise'. When that icon is my favorite death metal vocalist of all time, Martin van Drunen, then the situation goes critical, and there is no amount of Preparation H that can balm it. As you can imagine, that means I was not a very fair chap to Asphyx's full-length debut when it first arrived. Oh, I bought it immediately...it was a death metal tape after all and there was a time when I had to have ALL of THOSE, and could actually afford them, since they were scarce. I'm not even sure I was aware that van Drunen was on this until I popped it into my deck, only to gasp in revulsion that his filthy and menacing presence was being paired up with a set of riffs that simply did not deserve it! Comparing Testimony of the Ancients to this album...well...we all know who got the best of that deal. So, shortly after, The Rack got 'racked' with all the other middling material of 1991 that I wasn't feeling, and for a long time I got on fine ignoring it.

Of course, I was being a bit of a cunt, and the Asphyx debut is not all that bad...it's really a decent death metal outing with a large wake of influence we're still hearing today, but not so worthy of its cult status as others in its class. It's neither as gruesome as Autopsy's Severed Survival or impenetrably subterranean and evil as Incantation's Onward to Golgotha, two records that, along with this one, created a sort of unholy trilogy of sediment upon which much of today's retro cavern core rests. Nor is it quite so impressive as first offerings of other Dutch bands like Gorefest or Sinister, both more brutal and entertaining...certainly The Rack is not within reach of Malleus Maleficarum or Consuming Impulse, two of my favorite albums of all time in any genre. While they were unquestionably inspired by the Florida stuff, Asphyx lacked the capacity for sinister, infectious riffing you'd find on Scream Bloody Gore, Leprosy, Altars of Madness or Cause of Death. Lastly, though Asphyx cultivated a bit of a death/doom reputation here (not nearly so much as on some of their later efforts), there is an almost unanimous lack of effective, brooding atmosphere and sadness beyond a few of the sparse leads and melodies, for it to be placed in the company of Lost Paradise, As the Flower Withers, or the raw and influential Into Darkness by New York's Winter. Not that I myself love all the gloom cookies in that last batch equally, but The Rack is just not as emphatically depressing.

No, best to think of this as a decidedly average set of death metal riffs, benefiting from an ace vokillist, that happened to be released in the right place and time that those future generations on the internet would worship it by chronological proximity to the birth of the genre. It was one of the earlier Century Media offerings, along with Tiamat's sophomore The Astral Sleep (which is also a better record), released in a period when that label had yet to become a household name among the metal crowd, but still managed to get it out in stores here in the States; they might not have been heavily promoted, but Asphyx was 'available' to purchase, or to check out, and I think that generated some momentum other death metal antiquities were unable to partake in. These days, it seems almost as if this was one of those records that you 'automatically' have to fiend for if you're a Legit Death Metal Person of Taste, a sentiment that is rubbish and not even hinging on truth, but one that is unfortunately commonplace for a lot of these 1990-1993 releases that almost no one gave a shit about when they first dropped, including yours truly who bought them all like a kid in a candy store. That's not to say its historically insignificant...for example, it's one of the first cases of a death metal musician finding success with a second band (along with Chris Reifert's transition from Scream Bloody Gore to Autopsy); the logo and H.R. Giger-like artwork by Axel Hermann are undoubtedly iconic.

The Rack is produced with a raw and grating guitar tone against a relatively spiffy drum mix that doesn't confer much power to the experience as a whole, and even van Drunen seems complacent to the crunch of the riffing, where in Pestilence he was helming some of the most brilliant, frightening and creative guitar progressions that either thrash or death metal ever produced (to this day). The pacing on the album ranges from slower, 'doom' chord constructions to rabid triplet chugging, and I found some of the most aggressively flooded passages to remind me quite a lot of Obituary's faster material, or the dense tone of the guitar in general; though John Tardy's ghastly voice seems a better fit for this than Martin. Asphyx also turns out a number of more musically involved grooves at a 'happier' pace, but what all of the rhythm guitars have in common is that they're not terribly memorable... often reduced to just grinding white noise during some of the vocal lines. Think Severed Survival or Mental Funeral if they were a little less catchy and grotesque, with a few of Death's old tremolo picked patterns modified to seem more boring, and you are in the ballpark of how this sounds. The one caveat to the middling of the songwriting is that the atmospheric leads really stand out so much by default...the listener's becomes so accustomed to not hearing anything interesting, just a lot of abusive and crunching riffs that even your cat could play with minimal instruction.

'But it's so heavy, maaaaan.' Yeah, yeah, I get it, but no, when Black Sabbath did these doomier, simplistic riffs it was heavy (and revolutionary). When Autopsy did this it was carnal. When Obituary did it, I kept checking my closet at night, and a close eye on the manhole cover outside. When Asphyx does it, the notes just do not fall into patterns that are in any way remarkable or creative ("Pages in Blood" has what I believe to be the most entertaining chord placement on the disc). Not unlike Cancer's debut To the Gory End: passable, but all around unimpressive. I might dub The Rack an 'idealess' example of old death metal, and I would not be incorrect, but I think the record is saved by its dispassionate ugliness and the few spires of melodic grace which erupt from the growling turmoil of van Drunen and Eric Daniels in tandem, in tunes like "Evocation". I unfortunately cannot say much for the bass playing...it was never the focal point of Pestilence either, but at least it's present enough that it balances out Martin's contributions against the other instruments. A subtle pump easily subdued by the sustained fuzz in the rhythm guitar, but audible. As for the drums, one might say they suffer from the same ills on a lot of other, older death metal recordings...this was not a point at which everyone had jumped onto the Slayer/Dark Angel extreme drumming train, so this is primarily simplistic, rock based grooves that fit the slower moments but don't necessarily pick up much in intensity during faster sections. The kicks, toms and cymbals all sound really dry.

My appreciation for The Rack has admittedly waxed in time, from bland disregard to general acceptance, and I can occasionally break this out and listen through the whole thing without falling asleep. Largely because you grow an appreciation for the simplicity and authenticity of these times. That said, the production is simply not all that interesting, most of the tunes sound better on stage these days. In a pivotal period in which death metal was still being refined, experimented on, and ramped further towards the inevitable brutality and instrumental mastery, the Asphyx debut is simply not comparative or competitive with much else. The lyrics, which deal with optimistic topics like disease, torture and religion (yes, I know they're all the same thing) are very often stronger than the music. The Rack seems to be bookended by its better material: the 80s sci-fi/ambient intro "The Quest of Absurdity" is a fantastic setup for which there is no real payoff when "Vermin" arrives, and the closing duo of "Pages in Blood" and the sprawling, nine minute title track are the most effective in terms of sounding monstrous and brooding. Otherwise, it's just not that compelling a listen...you get some sparks of atmosphere through the leads, but they're too few and far between. Ultimately, it's 'good', but just barely...a cafeteria steak & cheese as opposed to a rib eye at a four star establishment, and I have to try to force myself to 'forget' where van Drunen had previously appeared. But, hey, it's honest early 90s death metal, from a band that would shortly improve, and if that's enough to salve your bum, you probably don't have one, which makes the prospect of assless chaps that much more...awkward.