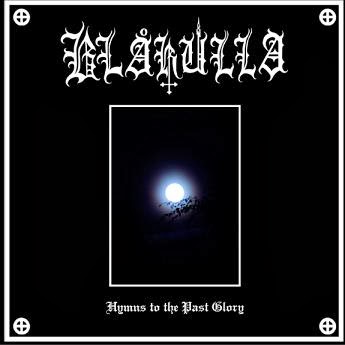 Perhaps the greatest strength of this Blåkulla EP is its ability to hold true to the simplistic, lunar grace of the cover artwork. The moon is by no means an uncommon occurrence in the black metal medium, but there's also nothing quite like finding an inherent comfort in a particular image, putting on the music and then having it fulfill those expectations. It's like a cup of coffee in the morning, or the euphoria I feel at the first signs of autumn or winter. Without these things, often taken for granted, I would find existence far less appealing. And so, too, do I find nourishment in music like this, even if it's aim is never extraordinary or unique. Not to be misleading; there's nothing specifically 'comfortable' about S.B.E.'s latest recording. This is raw and conservative black metal not entirely deviated from his 2011 full-length Darkened by an Occult Wisdom, albeit with a little more of a glorious maturity in how the songs are composed, how the vocals are performed, and the murky majesty of the chord selections which successfully conjure up a melancholic pride without needing to beat you over the head with it.

I enjoyed that S.B.E. could compose longer tracks on the debut without devolving into the utter tedium I often associate with such songwriting, and this is a characteristic retained by this material. In fact, my favorite of the three tracks is the 12 minute anthem/finale "Nostalgia from Desolate Times"; moody black-punk driven rhythm guitars that have a real density to them, without leeching away the melodic structure of the chords or the emotional resonance of the caustic vocals. It's all pretty simple stuff, dominated by tremolo picked guitar,  and doesn't offer a lot of variety in terms of tempo, which makes for a long time spent with the tinny blast beats. But there are various surges in speed and intensity here which keep it well within the attention span, and it certainly captures the disc's overall mood...that of traipsing nighttime terrain on a journey, both metaphysically and nostalgically recapturing the vibe I once felt in the early 90s, when finally this strain of metal had broken away from the norm to satiate a more nocturnal, atmospheric craving for sounds like De Mysteriis Dom Sathanas or Bathory's sophomore The Return.... The production aesthetics seem very true to this period, with the soaring, airy vocals, the mid-range guitars thrusting alongside the charging kicks and snares which feel as if they've been played at you for a distance...like three players set up in a forest but the drummer just happens to be the furthest away from the listener's perspective.

The riffing vibes I picked up here were mildly less sinister that the debut, and in turn more grandiose, but there's not as wide a palate of these, so they stay relatively even-handed across the three tracks. The most versatility you'll find on the EP is in S.B.E.'s vocals, shifting between hoarser invocations and decrepit, passionate howls which seem slightly cleaner by comparison. There's a lot of sustain and decay when he holds out the screams that gives you that impression of some broken down hermit/heretic out in the wilderness, exhaling curses against those who set him on that path. Or an angry specter's accusations to the living. Either way, it's not just the predictable, monotonous rasp you might come to expect, and goes a long way towards forging decent material into something more worthy of your attention; which is ultimately where Hymns to the Past Glory lies on the spectrum...traditional atmospheric black metal focused wholly on savage, central instrumentation (guitars, drums) rather than symphonic arrangement, but arriving at that same end result. Comparable to both the traditional Scandinavian scene and the harder edged contemporary Quebecois stuff which seeks to retain those eerie, early themes and values of black metal. It's not expansive for the style, but doesn't really need to be if you're in the mood for 25 minutes of bleak reflection, far away from the sun.