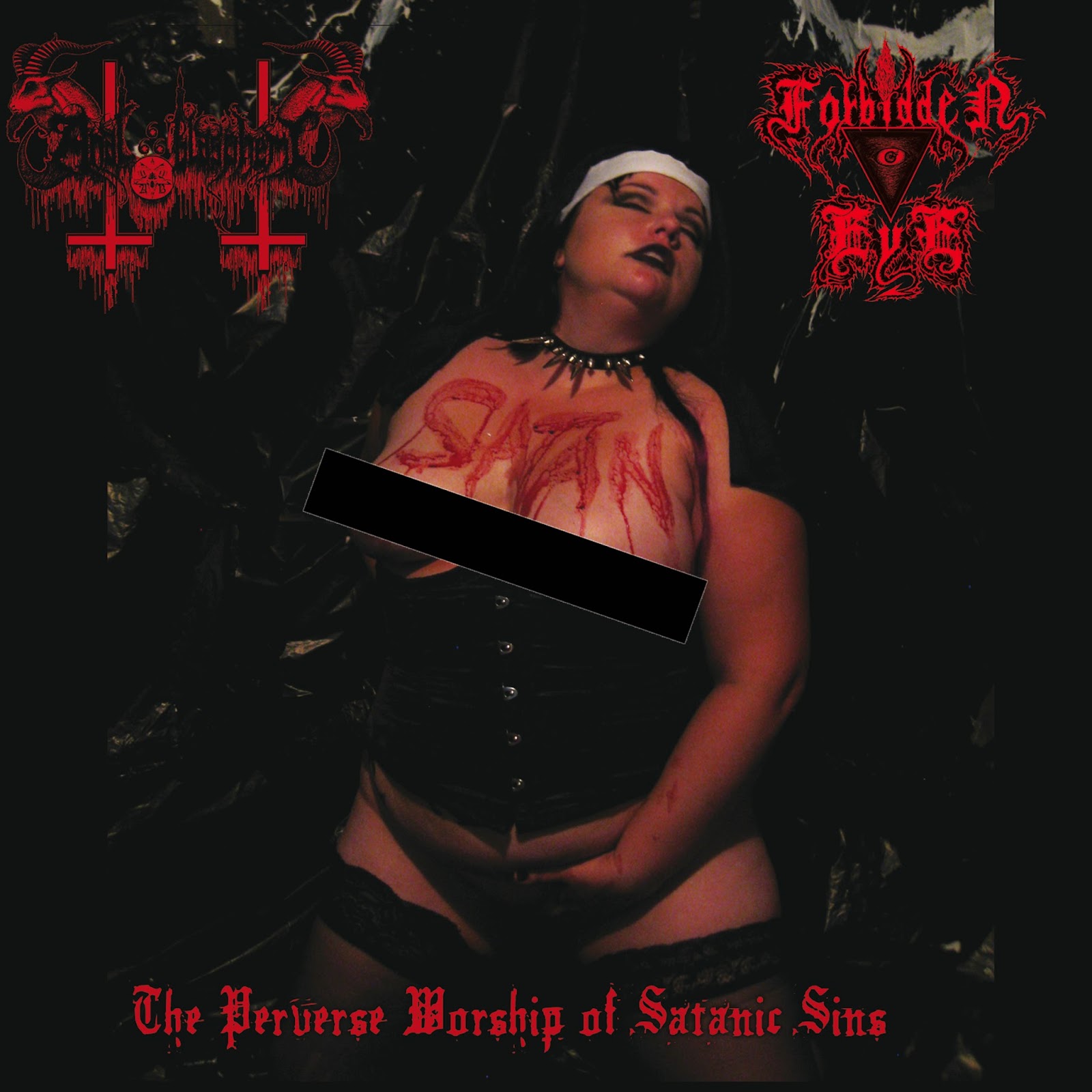 Beautiful, voluptuous blood-smeared nuns pleasuring themselves? I'd like two, please. So when I first laid eyes on this split's cover, I admit to spending some time in lecherous distraction, but soon realized that one of the acts, Finland's Anal Blasphemy was one I'd encountered prior, on the Perversions of Satan album a few years back (2012), which was put out through Hammer of Hate...and this was not the first sexy cover that Molestor Kadotus has given us (check out the Filth Union in Desecration split he did with Bloodhammer back in 2007). The guy has great taste in women, that I will tell you with absolutely no irony. The other band here, Forbidden Eye, is a Swiss outfit I'd never actually heard before, but they've put out a bunch of material through other obscure bands in the past. Bottom line: going off the logos and titles alone, I was expect the horniness to be conjoined with the hornyness, and to have mine ears raped by formidable, raw, bestial black metal with no apologies whatsoever for its cruel nature.

And would you know it? That's precisely what happened...not that I can vouch for either of the band's here writing top-notch, memorable material, but they certainly retain some loyalty to the sinister precepts of their genre and will not offend anyone seeking out the blood and brashness of influential records like Mayhem's Death Crush, Bathory's Under the Sign of the Black Mark, Blasphemy's blacker-tinted songs or about half the Finnish black metal underground. The Anal Blasphemy offerings are pure smutty Satanic fare ("Licking the Cunt of Chaos", "Sperm of Satan, Antichrist Semen") with raw guitars banging out familiar, crude riffs lacking any notion for melody or complexity, while the vocals have this extremely carnal rasp to them which is a little less sibilant and serpentine than many of their contemporaries, but had a lot of nasty sustain as they snarled out syllabic patterns. The drums here are storming and raw and not necessarily at the fore, while the bass just seems to follow the rhythm guitar. They get a bit more ambitious on the 9 minute piece "Birth-Death-Rebirth", with some slower rhythms that created a more compelling atmosphere for the horrific growls and rasps, plus the bass groove there was more alluring and hypnotic....also some a creepy film sample in there...was that actually from the fucking Masters of the Universe movie!?!

I found myself more partial to the Forbidden Eye material here, if mainly for the ways the guitars and vocals are mixed, with a nice, wretched mid-range to them that complemented the dreadful, hellish rasp of the front man Winter. The drums also crash along with a lot more force and attitude, and the chord progressions here have a little more swagger to them, at least in the track "The Moon and the Blood Serpent". They also seem to be focused more on the ritualistic/occult side of black metal, so several of the riffs have a more nocturnal majesty about them that is pretty in-line with a lot of stuff you'd expect from Finnish outfits like Horna, Sargeist, etc.; whereas Anal Blasphemy is all about sexualized evocations on a black altar. That said, this split functions because both of the groups do really complement one another. Production differences aside, they both play at a similar pace and complexity which is entirely a paean to the primitive, necro side of the genre, so don't go into this expecting symphonic arrangements and musical showmanship (beyond the one angelic intro piece on the second side). It's ugly, filthy fucking black metal, the way a lot of folks like to play it. The way a lot of folks like to listen to it. I'm hardly an exception, but overall I wouldn't say I found this to be particularly standout material...it's decent, and was a good introduction to Forbidden Eye, but I enjoyed Anal Blasphemy's two full-length records (Bestial Black Metal Filth, Perversions of Satan) more than the three songs here.