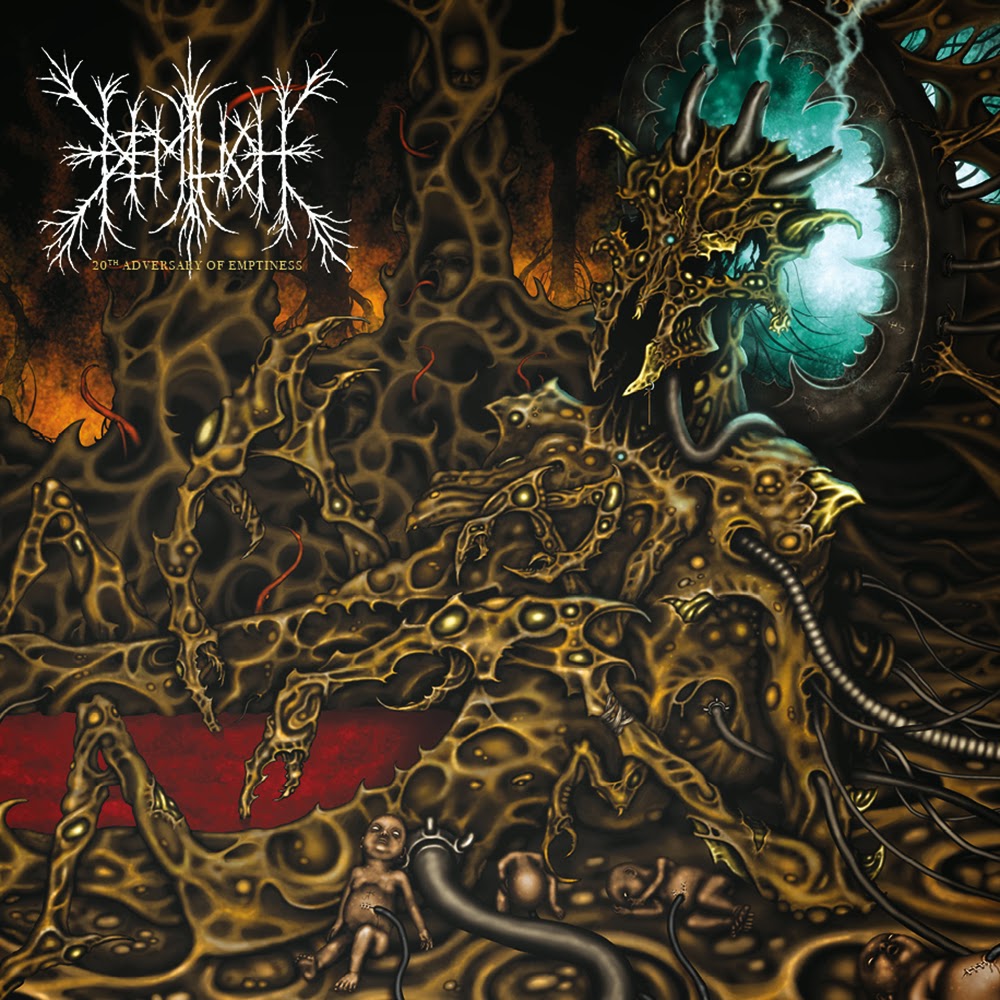 How to make a near-perfect record even better...re-issue it during a period where it isn't readily available, with intriguing new cover art in a limited edition 3LP or 2CD set, that includes what is very likely the entirety of what the band has ever recorded. Now, trust me when I tell you, that if you've been holding out on Nespithe and never had the chance to purchase it, this Svart versions release of what was originally supposed to be put out by Antti Boman and Demilich themselves is what you want. Yeah, I know firsthand, having the original CD or cassette is cool in of itself, but you're getting an enormous value that collects the demos and rare recordings in a comprehensive fashion so that you're no longer forced to mine for them online or receive them piecemeal through earlier issues of the CD. This is Demilich, and very possibly all that they will ever create, so what the fuck are you waiting for, and if you've long owned another version and are craving some vinyl, you may not get another opportunity like this.

The centerpiece of this is obviously Nespithe itself, and while a co-blogger of mine has already offered his two cents on the experience, with a perfect score (one I don't largely disagree with), I felt it appropriate to explain why I have so long enjoyed it, and why it's easily my favorite of the classic Finnish death metal works (at least on the uglier side of the equation). Originally a blind buy on tape through Necropolis/Pavement, and probably one of the last cassettes I purchased, as I was transitioning to CDs. I had not come across the band through tape trading, but the name instantly appealed to me through my love of Dungeons & Dragons and all things fantastic, metallic, evil and arcane, though this was a point at which I'd already cut my hair and become the college guy, listening to just as much new sound outside of metal as within it. And that's really part of the appeal of Demilich...their strange, atonal, Bolt Thrower-grooving take on the sound which relies heavy on the quirky repetition of evil note patterns and the amphibious, unaffected guttural rumble of Boman. Throw in the cryptic lyrical schemes and over-the-top song titles like "The Planet That Once Used to Absorb Flesh in Order to Achieve Divinity and Immortality (Suffocated to the Flesh That It Desired...)", and you've got a concoction that any death metal dweeb would (and did) find impossible to resist. And as much as I enjoyed other classics of this scene (Worth Without God, Slumber of Sullen Eyes), I felt this was mildly less tethered to the Florida/Swedish traditions...no, this was something new.

With the 20th Adversary of Emptiness, you're hearing Nespithe like you've not heard it before, remastered from the original master tapes rather than the lesser version that had been reprinted in the past. The bass and guitars seem a bit more evil, the drums really pop out and Boman still sounds like an undead bullywug gurgling frogs. Yet, you still have that entire toilet-bowl atmosphere due to interaction of the deeper vocals with the swarthy bass and higher pitched grooving melodies. It sounds phenomenal, and every subtlety and detail comes out to the fore here, with some of the moodiest and most creative chord progressions you'll find in cult death metal hands down. These guys were just as off-the-hinge as a Cynic or Carbonized, well before stuff like Gorguts Obscura came down the pipe to redefine death metal's boundaries, and although it fits fully within the genre, the groove and jazziness certainly places it within reach of the 'avant-garde'. It's just one of those albums you hear once and never forget, for better or worse, and if I had to piece together a top 20 death metal record list of all time, it would feature prominently, even if it wasn't at the top. And that's only the first LP in this package, mind you...

The second, Em9t2ness of van2s1ing, features both The Four Instructive Tales...of Decomposition and the ...Somewhere Inside the Bowels of Endlessness demos (from 1991-1992), and while a number of the tunes are redundant to the full-length, they sound even uglier here, but with a lot of that same ridiculous quality to the vocals. The downside is that I always felt the instruments themselves (guitars mostly) just weren't as pronounced against Boman's void-swallowing timbre, though the crudeness is very likely to appeal to that minority crowd which simply prefers everything as rough and tumble as possible, and these demos certainly give a more squamous and grinding impression than the 'refinement' on the full-length. Of the two, Four Instructive Tales... is superior, since it has some non-album material which most people who loved the full-length forever would appreciate, only this has been put released before, I believe on both the Repulse and Century Media CD re-issues.

On the last record, V34ish6ng 0f emptiness, we're presented with the The Echo demo (also 1992) on the A-side, which is once again a bit redundant since it's almost all on the full-length, but for completion's sake why the hell not? More excitingly, the 'vanishing' sessions on the B-side, which were what I was most looking forward to hearing. A trilogy of tunes recorded in 2006 which are frankly excellent and aimed at what was essentially a Nespithe 2.0 aesthetically, the one difference being that the guitars are more raucous and grinding directly against the vocal gurgles. Riff-wise these are not a far cry from 1993, and I think for most people that would have sufficed. Personally, though I enjoyed these tunes, Demilich always struck me as the type that might try and go further 'out there', so I was a little surprised that the material didn't feel so alien, but who knows what might have occurred had this group continued its career from Nespithe onward?

Top this off with the usual boxed set stuff, like a poster, sticker, and a pretty comprehensive booklet which includes a lengthy interview, original artwork, and just about anything the completist would desire, and you have a package well worth owning, provided you don't have to sell off your little sister to acquire it. And even THEN, it might STILL be worth the trade...just think, no more potty-mouth bitching, no more Justin Bieber, no more lollipops, no more Ke$ha, no more My Little Pony...just an amorphous mass of primordial Finnish death metal that sounds like it was paid forward from the formation of a black hole. Do it, bro! Human traffickers are often just a phone call away.