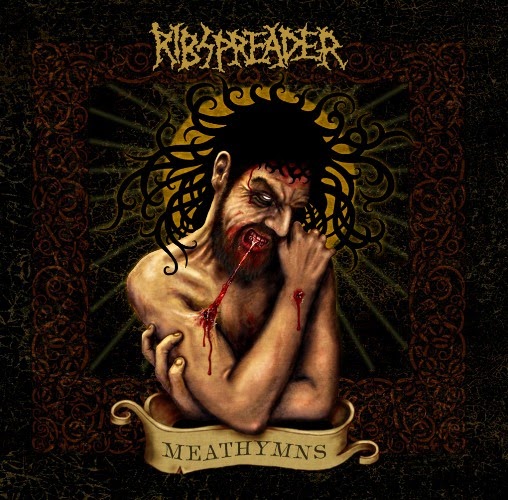 Rogga Johansson's death metal proliferation certainly leaves him at the disadvantage of spreading himself a little thin, and Ribspreader itself seems to have been a victim of the process. This was actually one of the first of his projects I got heavily into, but beyond the first couple albums I felt there were some diminishing returns as far as my excitement level. Recently, The Van Murders and the Kult of the Pneumatic Killrod double album were both decent offerings, but nothing to whip me into a frenzy like his work with Putrevore or Revolting, and Meathymns sort of continues this process of meting out solid, competent but ultimately somewhat ineffectual death metal with a heavy emphasis on the Swedish sound that so inspired Rogga in the first place.

This is a concise record that knows exactly what it's on about. Beefy rhythm guitars with a lot of thrash and punch to them which I'd liken to a blend of Heartwork-era Carcass, Dismember and Entombed, though the riffs are about 50/50 hit or miss in terms of becoming engraved on the listener's memory. A handful of more melodic tremolo picked riffs strewn about the grisly landscape, and a lot of low-end to the album in general thanks to Rogga's impenetrably consistent guttural which anyone used to Ribspreader, Revolting or Paganizer would be intimately familiar with. The drums generally shuffle along at a d-beat clip or similar pace which works well with the sinewy muted guitars, with a snappy enthusiasm to the snares. Lead guitars don't play a major role here, apart from some sporadic melodies, and I also felt like the bass lines weren't heavily involved in building an atmosphere, rather just adhering to the guitars and amplifying that bass. There are a few atmospheric breaks with dirty but less saturated sounding guitars, but they're not quite effective, and I'd have a hard time imagining Ribspreader go any further down this route...though I admit that the thought of several of these tunes with "Chapel of Ghouls" style synthesizers added might be refreshing.

Anyway, as the album title clarifies, this is meat & potato old school death metal which bears the loyal seal that its creator has stamped on dozens of records in the past decade, and there's not a lot more to rave on about. If you've been listening to the genre for that amount of time or longer, then it's easier to dismiss this as another jaunt down memory lane, a singular direction which lacks nuance and distinction among even Rogga's own body of work.  That said, there's very little of this guy's output which lacks at least some capacity for charm, and though a lot of the tunes suffer from excess sameness, it was fun to headbang along for 20-30 minutes. Not much of a transition or progression from that 2004-2005 period in which Bolted to the Cross and Congregating the Sick were unleashed (still the best from this project), but fans of Grave, Unleashed, early Dismember/Entombed or the first two Bloodbath discs might find in this a reliable backup to their favorites. I continue to admire Rogga's zeal for the genre, but I can't help but think that if he trimmed down the number of creative outlets he was involved with, the remainder would be that much more inspirational. Meathymns was a pretty average experience among his considerable canon.