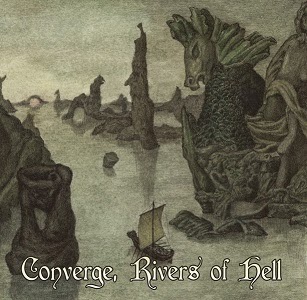 Converge, Rivers of Hell is significant for a number of reasons. While I'm pretty sure it's not the sole case of an individual artist producing a split release of his numerous recording projects, it's certainly rare in both its unified theme, and the ability of Dis Pater to create such a consistency of flow between three disparate aesthetics while maintaining the identity of each. And 'flow' is the key here, because we're dealing with a concept album about the Greek mythological rivers, so it's important that he can translate the classic characteristics of these bodies of water into musical form while keeping Midnight Odyssey, The Crevices Below and Tempestuous Fall stylistically flush with their constituent backlogs. To this extent, I was rather surprised by a few choices...for example, I'd have thought "Lethe" was a shoe-in for Tempestuous Fall, but ultimately this is little more than nitpicking, because Converge, Rivers of Hell is overall both an excellent proof of concept, and a fitting swan song for the two projects which would be Dis-continued after this recording. :rimshot:

This is for all intensive purposes a full-length record at around 64 minutes, with six songs all over nine minutes in length, but in this case it's a brilliant tactic which allows the listener to settle in to the current of each 'river' and ride it down- or upstream to its fellows. What keeps the three musical entities coherent is the heavy use of atmosphere and synthesizer orchestration throughout, so that there's a seamless feel to each of the tunes which are alternated in the track list (two apiece). Naturally, the Tempestuous Fall material is slower and more rooted in doom/death aesthetics than its peers; a mix of death gutturals and soaring clean vocals exhibit Dis' arching range over the medieval theatrics of the keys and percussion. Whereas The Crevices Below is still the stuff of subterranean majesty, despite being so expansive and busy with blast beats, driving chords and sweeping symphonic arrangements, you still get the impression you're at the foot of some underground castle, at the knees of some troglodyte liege who raves at you with a combination of slightly higher pitched gutturals and deeper bellowed vocals which ricochet off the stone and earthen borders of his domain. Midnight Odyssey then lives up to its more 'open' nature, beautiful and skyward and without restriction, ever his most varied creative outlet and the one which seems to have survived the purging of the others...

And thank the stars for that, since Firmament remains one of my favorite metal records of the last decade and its successor was not far beyond. Regardless, Dis Pater has seen fit that each of the three projects complements one another more than you might have suspected if you were just to compare the raw recordings each has put out in the past, to the extent that there is some degree of blending amongst them. In other words, while there are differences in style and architecture, he could have probably released this strictly under the banner of Midnight or Crevices and gotten away with it, especially the former since it's quite clear he's bent on evolving that sound over the course of distinct releases. But that's why Converge, Rivers of Hell works so bloody well, why it so effortlessly transports you from the shores of Hades to the euphoria of Elysium. Had the production been wildly jarring between projects, it would feel disjointed and distracting. As it stands, the split proves a fitting finale for The Crevices Below, and even Tempestuous Fall (the one outing of his that I wasn't initially impressed with). Catchy, dense, drifting, textured, absorbing overtures to classicism and tragedy, accessible and yet uncompromising. Perhaps the greatest living musical tribute to its subject matter, and a guaranteed refresher to anyone's appetite for whatever Midnight Odyssey comes up with next. I only regret I didn't cover it sooner.