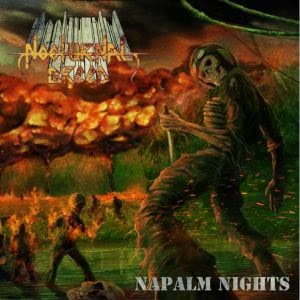 My relationship with Nocturnal Breed's music has remained tenuous down through the years...I've got fond memories of their first two records (Aggressor and No Retreat... No Surrender) as an example of 'thrashing like the 80s before it became cool again', and certainly they were one of the forerunners to blacken up the medium, but even their explosive 1997-98 period did not produce what I might define as a masterpiece. Since that time, I've listened to most of what they've released, consistently had some fun with it, but records by other bands like Aura Noir, Raise Hell, Antichrist and Deathhammer just seem superior at capturing precisely what I desire out of this infernal union of styles. That said, these Norwegians have truly stuck by their guns here, retaining the prevalent war themes we've encountered on several of their prior full-lengths, and a ridiculously infectious energy level. Let's face it, if you don't smile at least a half dozen times in response to what you hear on this record, you're probably not cut out for the thrash police force...

The vocals really sell this more than any other component: an intensified spin on the visceral ravings of one Mille Petrozza, with a second singer shouting in a higher, melodic pitch to add some manic texture. At once both raw and ridiculous, they absolutely establish nostalgia for what was just so exciting about European thrash in the 80s...that immediate distinction generated by both the taint of a native accent and a willingness to keep it no-holds-barred filthy. When it comes to the riffs, they're a little less impressive. West Coast-style thrash progressions redolent of old Exodus and Dark Angel threaded with thrilling, sporadic leads and a handful of tremolo picked patterns which seem to blaze more directly into late 80s death metal territory via Death or Morbid Angel. The drums sound brash, crash, hellish, homegrown like the Dave Lombardo we all worshiped on the first 4-5 Slayer discs, but on the other hand the bass guitar never really sticks its neck out beyond the rhythm tracks, and I feel like more interesting lines would have made the songs as a whole more unique. You'll really only notice the guy when he's alone solo to the beat, like the "Dragging the Priests" intro. Architecturally, the music finds a comfortable medium between the Bay Area and Teutonic pioneers during the Golden Age, but few if any individual guitar parts here transcend the whole or have any intention of competing with the classics.

The songs are actually quite involved, most clocking in at around 4-7 minutes with a lot of tempo change-ups and sensible arrangements. I also have to hand them credit for trying their hands at a 12+ minute Vietnam war-like epic title track which would make Sodom proud; complete with a sort of 'narrative' sequence where they use uglier, lower pitch vocals not unlike Tom Angelripper or Lemmy. Like most of the better thrash opuses of the last 30 years, you're getting a balanced attack between lightning volleys of incendiary speed, mid-paced headbangable rhythms, and even some slower, moodier material, from an incredibly seasoned line-up. The only 'new guys' are the guitarists, but one of them (Axeman I Mastor) is a returning member from their earlier, prime years, and the performance is quite seamless from the 2007 album Fields of Rot which was comparable to this as far as being fun, furious, somewhat forgettable but never futile. In the end, Nocturnal Breed remains a dependable brand name for those seeking out nasty thrash nostalgia with a bit of that Scandinavian black metal attitude, but the riff-writing is probably a little too loyal and familiar to the quartet's influences to establish its own sense of concussive timelessness.