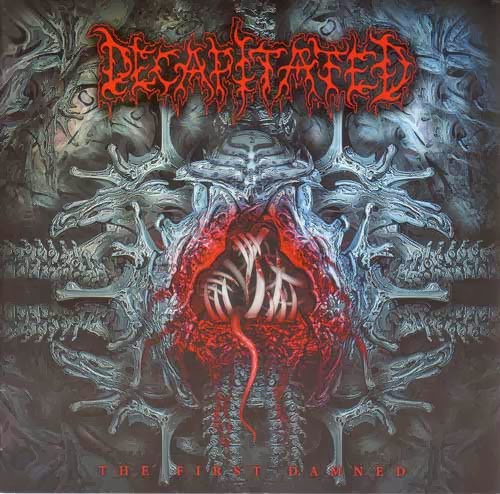 Decapitated stormed onto the scene at the dawn of the new millennium with not one, but two recordings, a phenomenal debut through Earache and a collection of their demos through Metal Mind Productions, which was pretty much THE homeland label for about a decade before this. The First Damned did arrive earlier than most 'first compilations' in a band's career, but it's not hard to understand why they would generate such excitement and warrant the treatment before even spreading a name for themselves beyond their local region...and in truth, hearing these guys mete out such technical finesse and unique spin on technical death metal while several of them were still in their teens was incredibly humbling and mind boggling...so much so that I almost didn't believe it at first...

Yes, I thought Decapitated must have been a band of proxies for scene veterans, because I couldn't admit to myself that these youths could be so brilliantly, blindingly talent, but I'm happy to have been proven wrong. The downside to The First Damned is that so much of its content, in particular the 1998 demo (The Eye of Horus) was also found on Winds of Creation where it sounded superior, not to mention the Polish Assault split released on Relapse which is basically the same demo. I'll get into a lot more of a description when I cover that beloved debut record, but coming out so close it certainly seemed redundant. My preference is for the album, simply because I prefer the drum and guitar tone, but this is nonetheless quite professional, with a clean and potent mix of rhythm guitars that advertises Vogg's bewildering level of dexterity and all around quality of composition when run up against almost ANY OTHER guitarist in the genre at the time, several of which were obvious innovators before his time, and perhaps even technically comparable, but not writing such an inspirational bevy of riffs in 2000. Once again, it's difficult to be a guitarist interested in this style and not feel bewildered by the playing, though the guitars outclass the rest of the performance.

Of a bit more interest to me was the Cemeteral Gardens material (1997), which was perhaps slightly less proficient but still impressive for the guys' age. Style-wise this isn't much different than what they'd create later, with tunes like "Ereshkigal" cultivating a mildly more old-school Florida death meets Vader style albeit more upbeat and frenzied in the picking. The production was still good, but the guitars took the center stage here a bit much (just like the second demo), and the drums and bass settled more into the background, though I don't want to leave an impression they're inaudible...they are. At any rate, this material was the reason I bought the disc when I saw it advertised, I had already acquired Winds and was interested in having it for completion's sake just to hear the other demo content that didn't wind up on the full-length. And it's quite good, even the substantial organ intro to "Destiny". It's simply unbelievable to me that by 1997 Decapitated was already this polished, and they immediately made an impact on a budding death scene that hard largely consisted of tape releases outside of Vader, Behemoth's transformation from black to death metal, and a scant handful of other bands that had jumped to CD.

The two live offerings, "Way to Salvation" and "Nine Steps" were from the Olsztyn, Poland 'Thrash Em All' festival in 2000, not to be confused with several other gigs that shared the same name later, and they sound fantastic, giving a louder mix of the drums and a level of performance that is nearly consistent with their studio time. I mean, you put these tunes together with Winds of Creation and you can tell this was not just another band of brutes churned out the genre grinder, but something dressed to impress, built to last, which we all know now would not be the case due to a number of internal tragedies and inconsistent output, but was something to get excited for at the time. As to how I would rate or evaluate The First Damned, I must give it points for its completeness and even offering a small bonus, but I would not want to turn anyone away from the debut album where the band sounded even greater. If this was your first exposure to the Poles, then it would assuredly seem more resonant and remarkable, but alas it was my second, so it suffers from the redundancy I often face with demo anthologies of songs that were successfully refined. Still, a good collection, with no fucking around, and the chance to support a strong label that was delivering the goods long before the rest of the world could readily access them.