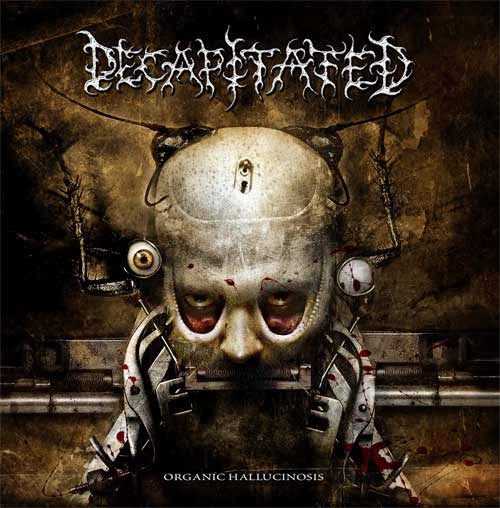 After a few years of decline, Organic Hallucinosis was both a welcome surprise and my second favorite of Decapitated's works, but that comes with a couple caveats. Firstly, that they sound like a much different band than on Winds of Creation and Nihility. Also, I can completely grokk why some people wouldn't be into this whatsoever, including long term fans of the band who were even on board for The Negation. The truth is that Organic Hallucinosis presents us with a bludgeoning, futurist death thrash experience which to me sounds like Meshuggah being run up against the Polish death metal roots; not that they employ the same djent style as the Swedes, but they both lend that impression that you're facing some industrialized, machine-like calculation of intelligence rather than the organic warmth associated with humanity, and without need for incorporating excess electronics. 'Posthuman death metal' is not a bad descriptor, and coupled with the first compelling cover artwork of the band's whole career, the album just hit me so hard that I was not left wanting.

Granted, I've cooled off a bit on my admiration for this over time. It was originally one of my favorites the year it dropped (2006), but these days I don't hold it in such high esteem, apart from a few tunes like "Visual Delusion" which still turn my brain and knees into jelly. Essentially they'd ramped up the aesthetics of The Negation to a mechanical cohesion, intensified the battery and applied a new frontman (Covan) to the fold, who had a more burly timbre to his voice which reminded me slightly of Max Cavalera's barks or Burton C. Bell's brutal vocals. Actually, thinking of this disc as Fear Factory's faster and heavier material meets a Morbid Angel or 21st century Behemoth is quite appropriate. Seven songs, concise plotting at just around 32 minutes, in and out of the conscience and leaves you bleeding from the ears. Still a reliance on heavier palm muted riffing progressions than their debut, which functioned brilliantly off those acrobatic note choices by Vogg, but this is way more explosive than even The Negation and that cybernetic merger of flesh and nihilism in the rhythm tone just lets this one take off so much further in the imagination, especially when engraved with tasteful little lead licks and often some jarring shifts in tempo/direction that erupt where you wouldn't necessarily be expecting them.

Organic Hallucinosis often makes my heart feel like it's freezed up and is slowly being coated in chrome, like the Borg virus is taking over my person and I'm being ghosted in my shell. The brutal, thrashing, punchy guitars in tunes like "Flash-B(l)ack" manifest enough groove and excitement while the album as a whole does maintain a relatively blasted momentum, often to the extent that exhaustion might set in were it not so short. But that's really the theme running through this material: that the human frame gives out and its skin and muscle is replaced by unfeeling metal, lyrics exploring the pessimistic side of civilization, from being covered in its waste ("Day 69") through the inevitable 'evolution' into machinekind ("Post (?) Organic). The drumming is simply ungodly, one of the most incredible exertions I've heard on a Polish death effort, and contributing more than any other factor into how inhuman the experience leaves you. To some extent, I do these days find a lot of the actual riffs lacking...as pieces to the whole they function unanimously, but I did still long for the mindbending musicality Vogg was capable of at a younger age, and therefore Organic Hallucinosis could really not ever replace Winds of Creation. Yet at the cost of distancing themselves from their origins, they managed to breed some new motivation and potential...

...which only adds to the tragedy of this being the last album for almost all the members involved. Vogg would continue with a new lineup for the mediocre Carnival is Forever, a bouncier and dumbed down Decapitated for a new decade. But we lost Vitek's substantial skills in the Belarus car accident, as well as Covan (who is still recovering from massive head injury); and then the long time bass player Marcin Rygiel departed before the band went into a sizable slumber. The universe fucks us once again out of a dementedly talented musician, well before his time, and its a shame that we would never experience what the same four would have done on an Organic followup. I like to imagine that they might have gone back to that creative riffing of the debut and then embedded that into the caustic brutality employed on this record, a potential game changer. Alas, I'll never really know, but I do know that this is the first Decapitated disc I reach for when I'm not in the specific mood for Winds of Creation. There are some imperfections, and it doesn't hold up for me quite like that initial exposure eight years back, but it belongs in that once-future classification I attribute to albums like Demanufacture or Darkane's Rusted Angel, and while that's not the sort of hardware that everyone will enjoy, I can plug right into it.