Anarchos - Descent Into the Maelstrom EP (2014) 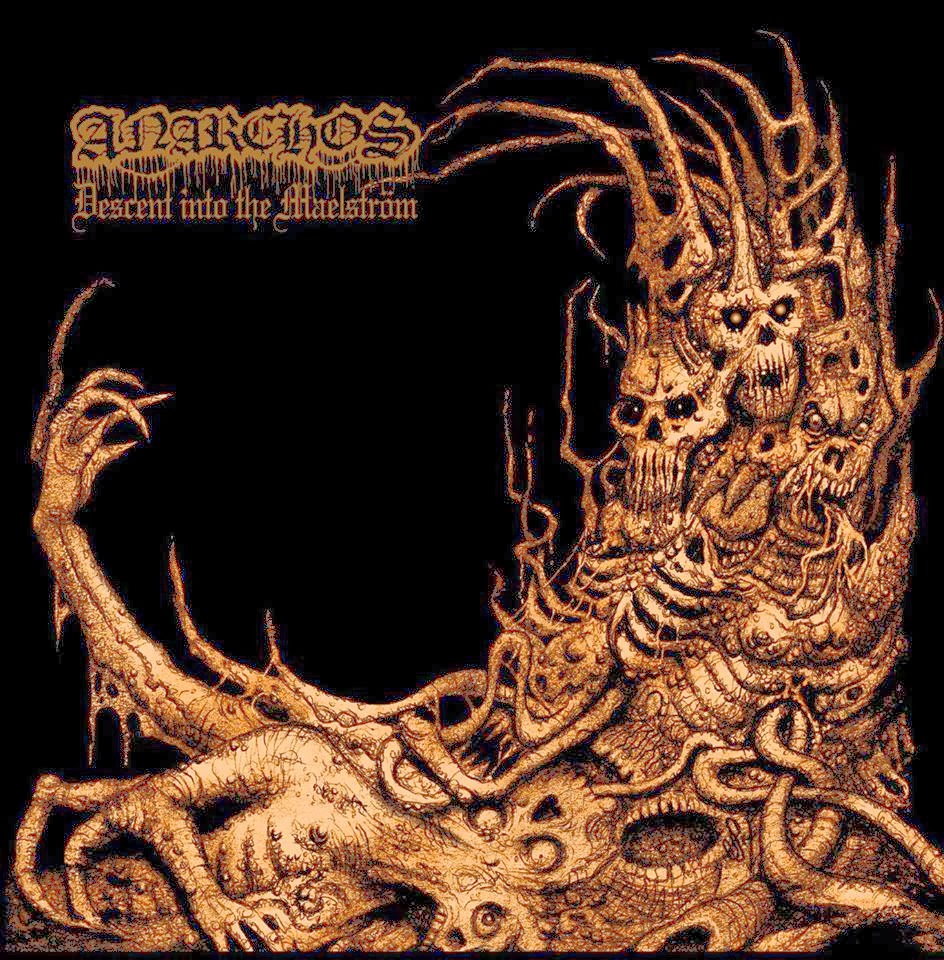 The mass invocation of throwback death metal these past 5-10 years has proven a double-edged sword, simultaneously reminding us of what it was we so loved about the genre to begin with, while beating those aesthetics repeatedly into the dirt via the lack of nuance and distinction by so many of these newer bands. To be fair, I'm in the position of hearing more of these than the average listener will, and few of those spewing forth from the underground labels are truly terrible. In fact, I dig a number of them, some even managing to shake free the cauls of convention on subsequent records and become something truly buzzworthy...but most of them seem to flash in and out of the attention span quicker than I can recite the titles of their albums. Unfortunately, Dutchmen Anarchos are one such case with their Descent Into the Maelstrom EP.

There's nothing truly wrong or ineffective with this material, but it's ultimately just another paean to the early 90s, fusing together traits of the Dutch, Swedish and Floridian scenes into a groovy, unimposing brand of death metal. They don't necessarily aim to ape any one particular influence, but musically there are just so many callbacks to their inspirations that the songwriting doesn't feel fresh or compelling. Thick picked tremolo passages, meaty chords and eerie, dissonant solo outbursts recount Obituary during their prime (first two albums), while a lot of the note formations weren't unlike older Asphyx stuff. Vocals are like a median between John Tardy's grotesque growls and someone more blunt and direct like a Karl Willetts, while the bass lines are almost entirely dissolved beneath the weight of those crushing rhythms. I thought the drumming was solid...the kicks also have a tendency to become absorbed into other frequencies, but there is a nice mid-range potency to the snare which helps propel the entire proceedings unto their brutal end. But, even if I though the production here was perfectly serviceable on the whole, it's really the riffs and transitions which feel pretty scantily thrown together and don't have a lot of staying power.

Descent Into the Maelstrom isn't particularly atmospheric beyond the dense mix of instruments, and it also isn't interested in taking any risks beyond just those of playing to the nostalgic death metal audience. Which might be fine, if the songwriting was excellent, but when you're adding your two cents to a genre with such a long history, which already involves hundreds of phenomenal albums, it's quite difficult to stand out. And I personally just don't have much interest in trading down for music that mirrors but never attempts to exceed that which inspired it, stuff I was listening to in the 80s during my teens...unless it's incredibly catchy and well done, which this isn't. Descent falters for me because it achieves exactly what it sets out to do. Beyond that, Anarchos don't really fuck around. This isn't a 'bad' recording. They're not incompetent on their instruments, and they don't write crappy riffs, but neither do they write exemplary ones. Big, burly, by-the-books death metal for inexhaustible purists who crave simplicity, or simply haven't gotten enough of what they already love; otherwise, I'd give it a pass.