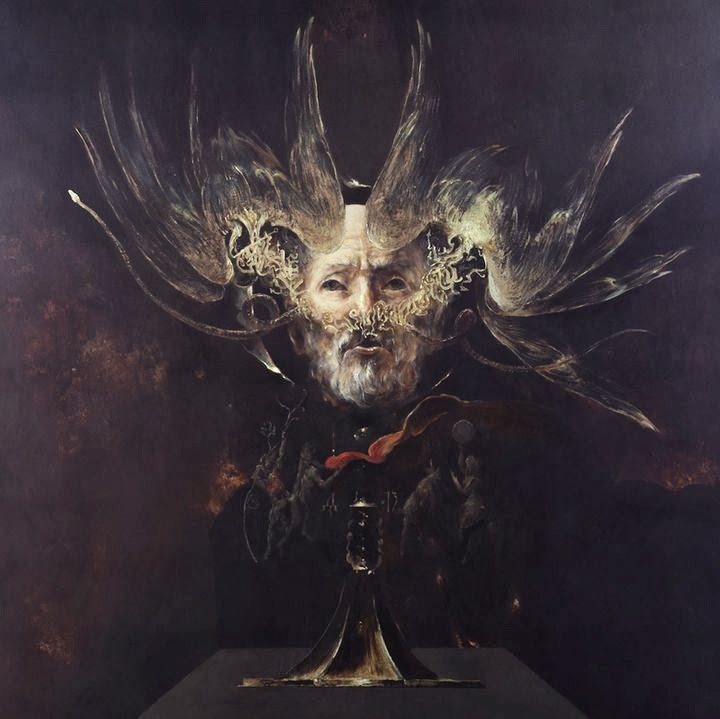 The Satanist was a bit of a stunner for me, because I've never been the most vocal advocate of Behemoth. I like a lot of their albums, sure, from both the earlier black metal period and the transition into a more mainlined brutality, but there has long been this sort of vibe rolling off generation Hot Topic that this is somehow the greatest band since, like, Pantera. That their albums and videos have achieved some form of death metal nirvana, reflected through their successful tours, sales, and at in their home country of Poland, a sense of mainstream legitimacy that few extreme metal acts could claim. This is not necessarily any fault of the band, which works hard and puts out a consistent level of product; but if I'm being truthful, it's difficult for me to think of Behemoth as this messianic (or anti-messianic) force in metal. Though I've bought and enjoyed a number of their post transition records from the late 90s and beyond, I find them little more than a re-branding of aesthetics already present in bands like Morbid Angel, Deicide, Vader, Marduk, Dark Funeral and Krisiun. Maybe they have better stage costumes and makeup department, maybe they've got better art direction packaging on their albums, and surely Nergal is far more consumed by occultism than a lot of the death metal diocese which would claim otherwise, but the fact is that most of their music blasts straight into one ear and out the other...

Not the case for The Satanist, which has been for me the first instance in which Behemoth truly lives up to the surrounding hype; an album that is not only phenomenally well-written, but bolsters production standards that crush the fucking sun. Not a major stylistic deviation from their last few discs, but the plotting here at long last seems to translate into an actual slew of songs that I feel like listening to repeatedly, which is more than I could say for stuff like Evangelion, which possesses a proficient, punishing quality that seems to plateau at 'good', eluded by 'greatness' and only ever broken out when I want a reliable, indistinct bludgeoning. The Satanist is just such a more well-rounded experience...blast beats are weighted off against genuine moments of poignant atmosphere and restraint. Individual tunes are distinguishable from one another, and after hearing one I couldn't quite put my finger on what would happen in the next. The death and black metal genre tropes which have shaped Nergal's career are more evenly balanced, and the robust production aesthetics and the precision instrumentation have just never sounded better. While The Satanist is still not a perfect outing, and leaves some area for further expansion, it oozes conviction from every pore. We all know Darski had a rough spell health-wise, but that this is a testament to his survival gives it all the more impact. Coming back stronger and superior is after all a chief virtue of Satanic self-enlightenment, and so I'm not at all surprised he chose the absurd profundity of its overt title.

At any rate, much of the album is still a locomotive of seamless blasted structures which weave together the resonant tremolo picking and mildly dissonant chord choices, ominous octave chords sliding around the underbelly of hellish beats and Nergal's powerful if not entirely nasty sounding growls. If you were worried that the advance snippets of "Blow Your Trumpets Gabriel" somehow lacked the intensity you'd come to expect, tracks like "In the Absence ov Light" or "Amen" make short work of the assumption like a hurricane whipping through a field of origami blossoms. The bass tone on the album deserves particular praise, it's just so fat and voluptuous and only ever loses some presence when the band is blasting full force, but there is just never a moment where the compositions feel 'empty' or lacking...layers of rhythm guitars or wailing and blustering lead passages always arrive, or tempo shifts where that fat, fat low end starts pummeling into your imagination like an infernal juggernaut. The ambient orchestration that both sets up "Blow Your Trumpet Gabriel" into those enormous riffs, and returns, even more horrifying in the bridge, was the perfect touch to balance out what are occasionally average chord choices. In fact, I wish this had occurred more often through The Satanist than it did, but thankfully the record is ridiculously effective regardless.

Lyrically, it's not a departure from anything else Behemoth has done in the last 15 years, but as with the mix on the bass, the vocals are just gruesome and over the top. You can feel the guy barking his guts out as he drives all the evil ego-tripping home. He sounds revitalized, recharged, and though I doubt the purpose of an album like this is 'fun', that is ultimately the effect of such a visceral, convincing performance. Their albums have always had that sense of entertaining intimidation. 'Look how fast we can play! Look how great we look! Look how comfortable we are in our wicked skins!' But then I'd put on one of the better efforts from Lost Soul, Calm Hatchery, Decapitated or almost anything from Vader and smirk at how much more I preferred their songwriting capabilities. Suddenly, Nergal and company belong amongst that crowd. Not that they weren't already a more smashing financial success, enjoying a level of popularity flush with Morbid Angel, Cannibal Corpse, Cradle of Filth and Dimmu Borgir, but I can no longer safely relegate them aside to the ranking of 'overrated', or dismiss them like a snob. This is a genuinely excellent album, both in appearance and sound, caving in my skull nine times straight and making everything before it seem like the warmup. There is still a distance to go before I can hail a Behemoth disc as a masterpiece for all the ages, but The Satanist at least flirts with that idea, and inspires belief beyond barren praise.