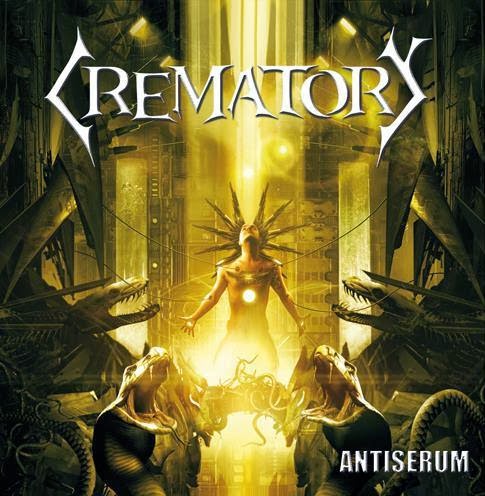 Crematory has always been a pretty hard sell around these parts. Let's face it, their entire 'death/groove metal with keyboards and clean chorus parts masquerading as Gothic metal' aesthetic just doesn't look good on paper, nor is it something the American extreme metal audience is likely to open their minds to and embrace, where you can really see the Euro scene into bands like Atrocity, Dreadful Shadows and Theater of Tragedy digging on it. That said, there have been a number of albums or individual songs by these Germans which I have fallen prey to, because as goofy as the style might seem with Felix's grunts mixed into the barebones chugging and flighty techno/orchestral synthesizers, the band can actually write a catchy fucking song or two. One that never eludes me is "Red Sky" from their 2004 album Revolution, sticks to me like glue and I can't pry it off no matter what solvent I used to dissolve it. But being that they write what is essentially darker 80s New Wave pop circa Depeche Mode or Peter Murphy repackaged into a death metal skin, I can see how they would possess a limited appeal...

Antiserum is an interesting record at first because it takes a visual turn into a possibly conceptual, science fiction territory which is further emphasized by what we might have once considered 'futuristic' keyboard pads, the sort that weren't uncommon in radio house/techno tracks from the 90s; still used a lot in Asian pop soundtracks for dancing video games. So take those sorts of melodies, and apply an undercurrent of dense chugging riffs, which admittedly do at least attempt to be catchy themselves rather than 100% banal palm muted insipidness, then layer on the death growls and cleaner, deep male choruses redolent of Finnish Goth metal bands like H.I.M. or To/Die/For, or for a closer comparison, fellow Germans Darkseed on some of their later output. This is what Crematory have served up here. The production is clean as a whistle, but that doesn't mean the guitars lack an ounce of natural grime, punch to their grooves. Drums aren't exactly intense but they are at the very least level and potent enough to stand alongside the rhythm guitars, and the keys and vocals both distinguish themselves with plenty of clarity. This is quite simple stuff, lacking much by way of musical complexity or innovative ideas, but the one thing Crematory have going for them is that this whole sort of 'rave metal for Euro-Goths' would seem so damn obvious that you wonder why more bands don't go for it, and as a result, these guys automatically sound distinct.

I mean, when I hear a Crematory tune, I know exactly what band I'm listening to, and the fact that they've survived for over 20 years and have just released their twelfth full-length speaks to their perseverance, and a reasonable level of success. SOMEONE is into this stuff, or they wouldn't have had such a long relationship with high profile European labels like Massacre, Nuclear Blast and now Steamhammer. On the other hand, Antiserum is far from the band's most sugary, memorable material. I kept feeling underwhelmed whenever they'd open up to the full-on chords and Felix's singing voice for some chorus, they just never really stick the landing. It all 'works', there's nothing remotely offensive or pathetic about what they've written here, and to be fair there is plenty of variation, from songs that focus more on the electronic/industrial side to those that implement your standard metalcore palm-muted pit slams and then wax atmospheric with them, to the more soaring Gothic metal tunes redolent of the other German bands I mentioned in the first paragraph of this review. 'Heartfelt' might seem a silly contrast when you hear Felix belting out his gutturals in a tune like "Welcome", but these guys (and gal) have always been sincere, and apart from the decision to go from a more pure death metal sound (Transmigration, 1994) to the more eloquent, catchy ...Just Dreaming, they have remained persistent in crafting their sound.

Ultimately, this one sort of disco danced into one of my ears and then raved on out the other, but apart from the cheesy limited edition bonus EBM/techno remixes of the tune "Shadowmaker", nothing was outright bad. They know how to set the stage and develop their ideas out to their natural conclusions, but I just didn't think the note progressions and melodies here were all that interesting, whereas earlier records like Awake and Revolution had a fair degree of staying power. Anyway, Crematory has always faced a bit of an uphill battle...the death growls often prove too much for the Goths, and the industrial components and clean singing parts too accessible for the death mavens. If anyone out there is interested in a happy medium between the two, or loves stuff like Sweden's Pain, Darkseed, Dreadful Shadows' Futile, or meatier European EBM with more guitars, then this may just fill that gap. Still, I'd recommend a half-dozen of their older albums over this any day, several of which I've already named, and here is a case where the cover art proved much more compelling than the musical content. This isn't exactly bad...they're just capable of better.