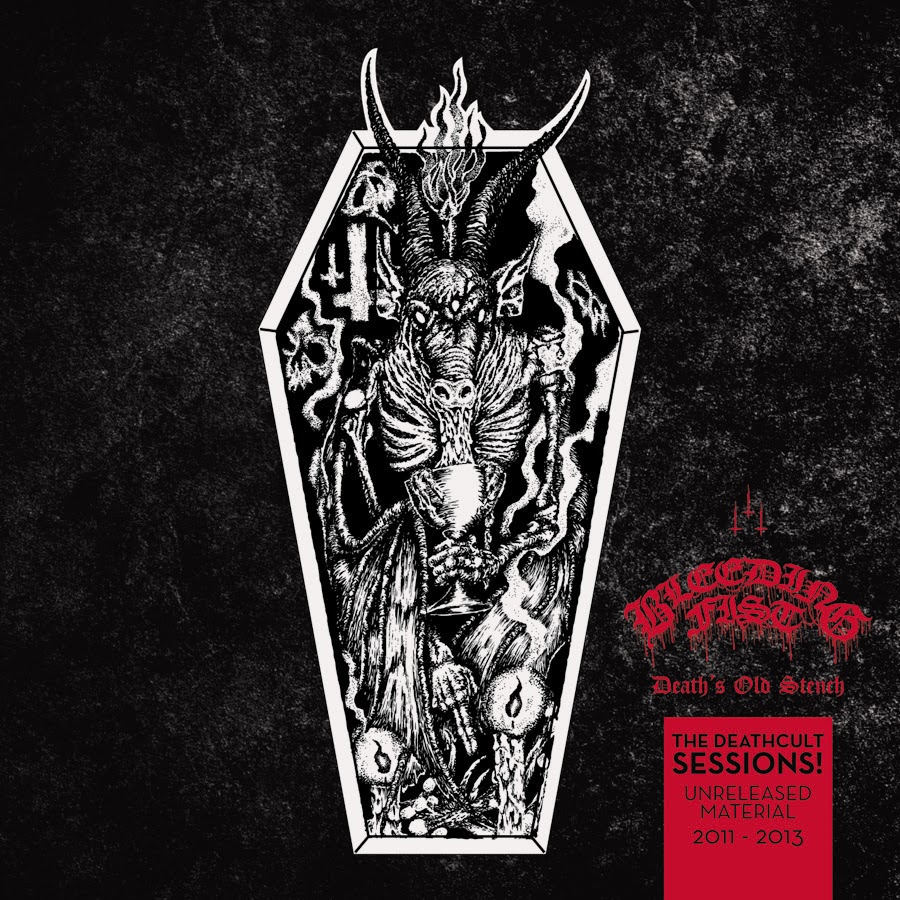 Earlier run-ins with Bleeding Fist's 2010-2011 EP material did not prove illuminating, but this Death's Old Stench compilation, which collects a bunch of raw, unreleased content written over the past few years, has a stronger allure which can not only be attributed to some superior riff choices, but the very production 'flaws' which contribute to its overall atmosphere. The Slovenians have long championed the bestial aspects of black metal, channeling them into something unwashed, ugly and abusive, but that's just not a winning formula when the songwriting is the sort you've heard a thousand times before. While a comp and not a standard studio record, and likely to have some inconsistency in the mix of individual tracks, Death's Old Stench is one of those offerings upon which a perceived 'weakness' to some actually transcended into a strength of my own experience.

I'm of course talking about the distant, uneven mix of instruments here which often favors the volume of the drums over the vocals and guitars ("Holy Saint of Death"), or the very opposite ("Blackened Illumination") where they can only be heard tinnily rifling away under the ominous atmosphere of vocals and tremolo picked guitars. There is material here which seems infinitely more dramatic and creepy than what I've encountered before on Devil's Ferox or Macabrum Bestia ex Abyssus, and much can be credited to the vocals of Hellscream which shift between the nihilistic predatory rasps so typical to the genre and some yawning, clean chanted passages which often arrive unexpected in the midst of what is otherwise a traditional black metal 101 tune. Rhythm guitars are extremely raw, and often just cut off at the end of a song rather than using a studio fade-out; the riffs are hardly unusual, but provide the necessary balance of melody and malevolence which sculpted the black metal field of the early to mid 90s into such a huge thing. I don't really hear a lot of bass here, which was probably a conscious choice, but might have otherwise added a lot more depth and atmosphere, however that's my only hangup with the production aesthetics (or lack thereof).

From a pacing standpoint, the album might have just been a full-fledged release, since the alternations between incendiary blasphemy and more moderately paced, melancholic tempos really feel 'rounded' and complete, and there are a number of evil sounding intro/interlude pieces which are basically spoken word with the chanted vocal tone and then a lot of reverb. Only the mix of various pieces lacks cohesion, but the songs all flow with the consistency of liquid hellfire, or rather the heat vapors coming off some molten river in the Underworld and then wafting about its vaulted subterranean ceilings. Raucous enough to appeal to those genre addicts who favor demo level recordings, but definitely tighter and more fulfilling than just any random rehearsal-sounding record where you can barely make out anything but hissing noises and screams. I won't go as far as to say I was impressed, but as someone who certainly has an audio fetish for the primitive roots of the medium, which carried into some of my favorite albums (old Bathory, Darkthrone, etc), this was a fairly immersive 48 minutes of material which will hopefully translate into any future studio efforts.