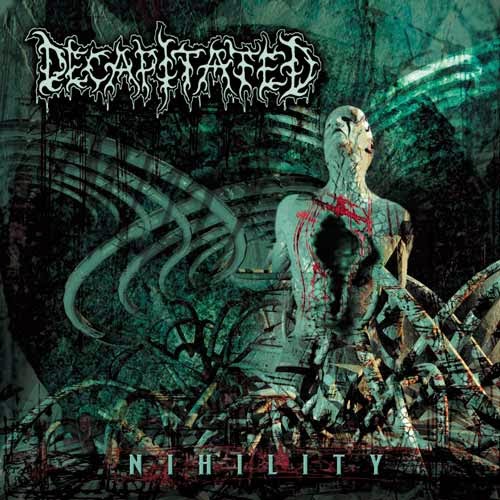 Nihility was the second and final Decapitated album. Okay, that's a lie, but it was really the last to truly deliver on what I felt was so strong an aesthetic foundation, and even then the well of brilliant riffing had begun to dry. It would be a stretch to call this a 'disappointment', but it was certainly a step down from Winds of Creation, retaining only a handful of tracks that were created at that same level of quality, and seemingly watered down with some simpler chugging death metal architecture that would create a more accessible interface with their growing audience. Really, though, it comes down to a selection of riffs which are simply more banal or boring than the debut, and might have been written by anyone in the Polish scene. There were a lot more points at which my 'oohs and ahs' were replaced by 'that sounds like Vader, or Morbid Angel', or whatever, and I also felt like the production here was also a bit more arid and non-compelling.

Funny thing, though, is that I know a number of folks for whom this was the first, and remains the favorite Decapitated listening experience. These people are wrong, of course, but let them have their delusions! Nihility seems to pursue a more cosmic, philosophical side than its predecessor, which was already fairly serious in terms of its lyrical bent, but unfortunately the ideas on parade don't really take that progressive next step which would have integrated more melody or stranger song structures you might expect of a maturation effort. Instead, this is a mix of about a half-dozen of the brilliant guitar patterns off Winds of Creation with a slew of death/thrash tropes redolent of the bands I listed above. You still get that drop-of-a-dime sense of concussive stop/start precision, and Vogg can swerve off into a monstrously memorable passage that stands among the best he's ever written, but they're just not as consistent. There are 'filler' songs here, without a doubt, if not many of them, and rather than listen through the entire 35 minutes and find myself questioning my worth as a musician, I always seem to skip around to particular tunes. And even then, there is nothing quite on the level of a "Blessed", "Eye of Horus" or any of the other masterworks they produced at a younger age...though a few tunes come admittedly close.

Exceptions are "Spheres of Madness", which has an effortless punctuality to the chugging that becomes instantly recognizable once it breaks into that second, clinical muted riff. "Eternity Too Short" and "Nihility" itself also feature some of those dizzying feats of dexterity, but other tunes like "Names" and "Babylon's Pride" leave something to be desired and I could list a number of other post-Morbid Angel bands in the same scene (Behemoth, Hate) who also might have created something similar as they were eking out their own stylistic transitions. That's not to say Nihility is lazy or lacks some creative drive behind its blueprint, but having expected the band's sophomore to splatter my brains everywhere and perhaps arrive as one of the most frighteningly intelligent albums in its niche in many years, I was pretty bummed that it was at best more of the same and at worst evidence of the 'sophomore slump'. The production itself, while technically not bad, seems to work against the seismic wonders of the performance...louder drums and a less warm guitar tone give it less depth, and Sauron's vocals felt rather dry, dull and might have been contributed by just run of the mill guttural guru, though they use some panning and other techniques to blend them into the atmosphere.

Still, I don't wanna seem too 'down' on this one, because if I were to pick some random gore splatter tech death record off the shelf in this period, Nihility would have still proven superior. The band fires on most cylinders and retains its concise and exciting impressions at times when the material isn't at the particular standard I expected, and surely they don't embarrass themselves, or experiment with the djent or groove-like elements that populate their more recent recordings. I can't help but wonder if the successful buzzing of the debut kept them so occupied that they simply didn't have the time to let a number of these tunes fully gestate, but then that material had been around years prior to the Wicked World signing, so I doubt it. I should also note that, while remaining sort of lame, abstract and computer generated, the color scheme and imagery on this disc were more welcoming than on Winds of Creation; the lyrics are also on the same plane as the first effort, if occasionally hinging on philosophical gibberish. Ultimately, Nihility hovers below that horizontal border of greatness, and has not improved with age, but if I were to collect a 'career best' I might snap up 2-3 of these songs, remix them, tag them onto the tail of the debut and call it a day.