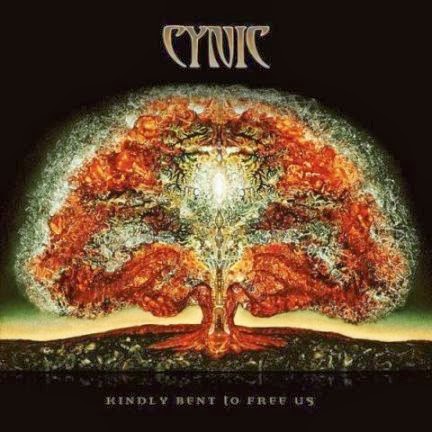 If there's one thing I wouldn't have expected of a new Cynic album, it's that it heavily remind me of, or felt like some stylistic retrogression towards anything they'd released in the past. That's not to imply that Kindly Bent to Free Us lacks fresh ideas or an arsenal of riffing structures we hadn't heard from them before, but with each new listen through this I kept thinking as if it were just an amalgamation of Traced in Air and the Carbon Based Anatomy EP. On paper, that looks pretty good, since I enjoyed both, but after a strong initial impression this turned out not to have the staying power I really wanted. To be fair, the gulf between Focus and Traced was so enormous that it would have been silly to expect such progressively-inclined musicians to repeat themselves, and the gap between full-lengths #2 and #3 was far shorter, so the aesthetic similarities make sense, I just predicted a much more expansive evolution and didn't get one, so poo on me.

If anything, Kindly Bent to Free Us bridges Cynic back towards a slightly more mechanistic variety of winding, dingy metallic grooves that counterbalance the soothing Beatles-esque vocal harmonies; a clean and tidy style which can sustain the natural variety, experimentation and ambiance with which they play. I mean, there is still nobody who truly sounds like Cynic...they are a league unto themselves and will live or die by their willingness to either succeed or cede to what they've previously offered, and I found this the least impressive of their long players, with the caveat that it undeniably provides a few curious listens through. The drums and bass are superb, the guitars busily constructed if not entirely catchy, and this is probably a more technical and 'metal' direction than Traced in Air, though it shares the same proclivity to lapse into these somnolent passages of cleaner guitars that sound like 90s prog rock lite. A number of the songs like "Moon Heart Sun Head" sounded like Yes or Watchtower being filtered through later 90s era Queensryche or Jellyfish, and a cloying haze of 'hippie enlightenment' seems to hover over their composition, but it's still a case where you can never quite predict the blueprint of an individual track, only that the vocals will remain consistently melodic and not too catchy throughout the 42 minutes.

It sort of saddens me that each consecutive listen to this evokes an even further negative reaction, so it might just be best if I don't revisit it next week, or the one after that. I like a lot of the subtle processed effects and nuances which either lead into the tracks or supplement their depths, more than the riffs, vocal hooks and choruses themselves, and that's not really a good sign. I kept pining for a joygasmic song like the ill-titled "Elves Beam Out" or "Integral Birth" but they're just nowhere to be found, even though Kindly Bent is very clearly clogged with efforts to capitalize on similar motifs. In the end, I had to console myself that this was merely a 'good' Cynic record for a few spins, but very quickly forgotten about when I break out any of their earlier works I own. It's also unlikely to generate any of the divisive buzz that surrounded their reunion earlier this millennium, since there is no real surprise or advancement upon what they've already produced. A shoe in for the appreciation of prog metal nerds who care more about smooth sailing and the showcasing of musical talents, but the older material went beyond that into a realm of obsessive, explosive passion that seems to be replaced here with a little bit of studio gloss and familiarity. Good, but never 'good enough' for a creative outlet like this which inspires such high standards of divergent sonic exploration.