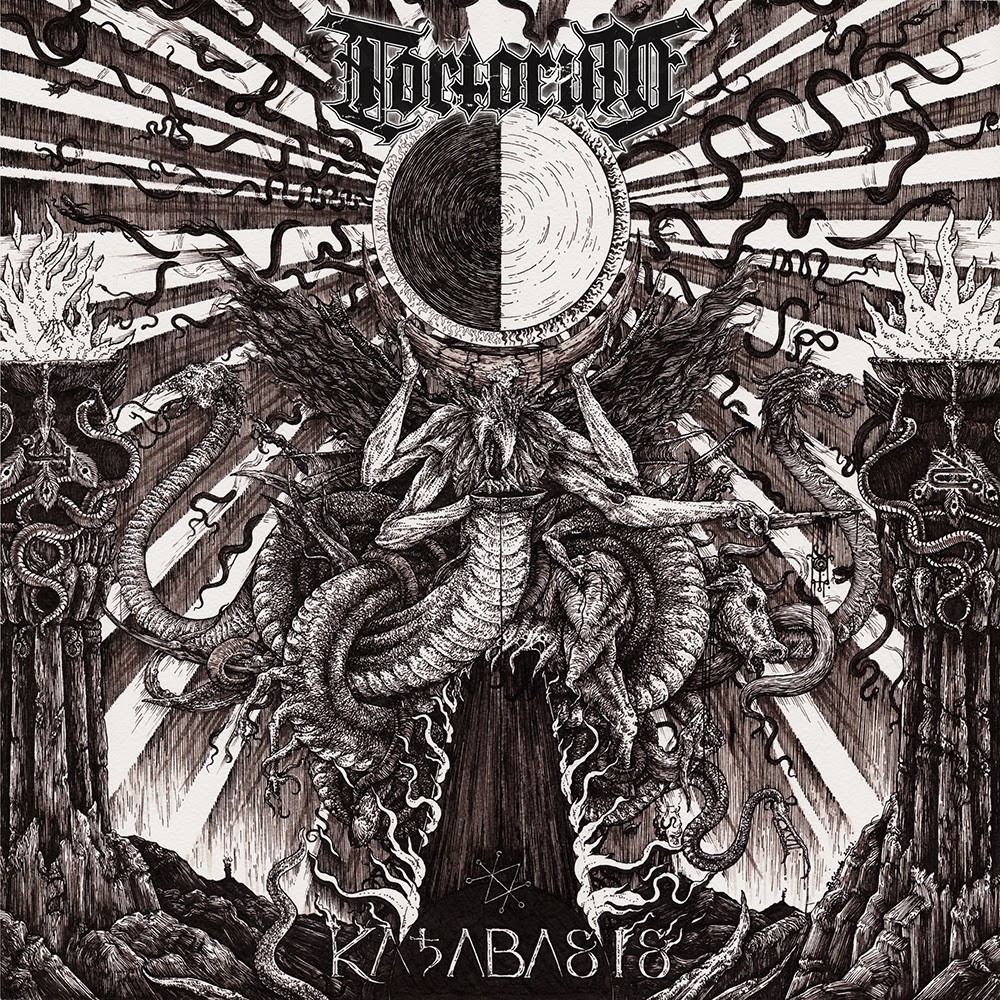 Considering black metal's reputation as one of the more 'evil' strains of music humanity has yet conceived, it's often surprisingly just how many albums fail to threaten or unnerve me in the slightest, and this is largely a symptom of the massive derivation and redundancy found within this medium. Granted, there are a lot of bands who have carved out their own identities within the expanded style, but too few can adhere to the base aesthetics and still evoke a chill. Thankfully, Norway's Tortorum, comprised of veterans from another of other acts (Aeternus, Dead to This World, Spearhead, Gorgoroth, etc) are one of this diminishing number, and their sophomore Katabasis is a fine example of malevolent black metal which capitalizes both on its conservative genre techniques and atmospheric embellishments to haunt the listener well past the midnight hour.

Yes, eerie atonal guitar passages picked through both tremolo progressions, spine-tingling melodies and even cleaner guitar tones; slathered in sustained, nihilistic rasps and not exactly something you haven't heard in the past...but written well enough that I must have busted through this not-insubstantial 53+ minutes of material four times before I even thought of what I could say about it. That's not to say there isn't a little extra padding or unnecessary repetition in a few places, but Tortorum generally reign in their tunes around the 5 minute mark and really only go overboard on the closer "Beyond the Earth and Air and Sun", a tune with a more spacious construction to it that allows for some malignant night-wind segues into whispers and moonlit guitars instead of just an endless loop of content. Add to this the general quality of the riffs, which are not entirely unique sounding but generally on the more memorable side...bluesy, mourning leads...tight drums on both the more prevalent double-bass/blasting extreme and the sparser moments...and last but not least, the great grooves manifest by the bassist that bind the entire experience into one shadowy stroll into the subconscious, and you've got one opaque plunge into sinister obscurity that won't soon evade your conscience.

Best of all, the production sounds absolutely ravishing, with an eloquent balance of airiness and meatiness relished with guitar lines that spring right out at you, angrier thrashing components which send the neck into strain-city, and just an overall seamless quality between tracks that takes into account a good deal of variation. There are moments where I felt the black metallic vocals could grow a little monotonous, and something even more psychotic might have made for an improvement, but Barghest is certainly adequate in terms of just meting out the traditional black metal vocal, and inserts a handful of lower pitched guttural growls so that it's not entirely one-sided. I guess I just wanted wails and screams over this shit, to enhance my own nightmarish investment in the proceedings. Otherwise, while not incredibly imaginative or too far outside the norm, Katabasis is a beast, a fully negative affirmation of its genre and just one of those black metal records which reminds you why you shunned society and started listening to the style in the first place. Fans of anything from Mayhem to Ondskapt to Shining to the members' other offerings would be wise to spend some time with this ghoulish drinking partner. Spite given musical flesh. Absinthe helpful but not required.