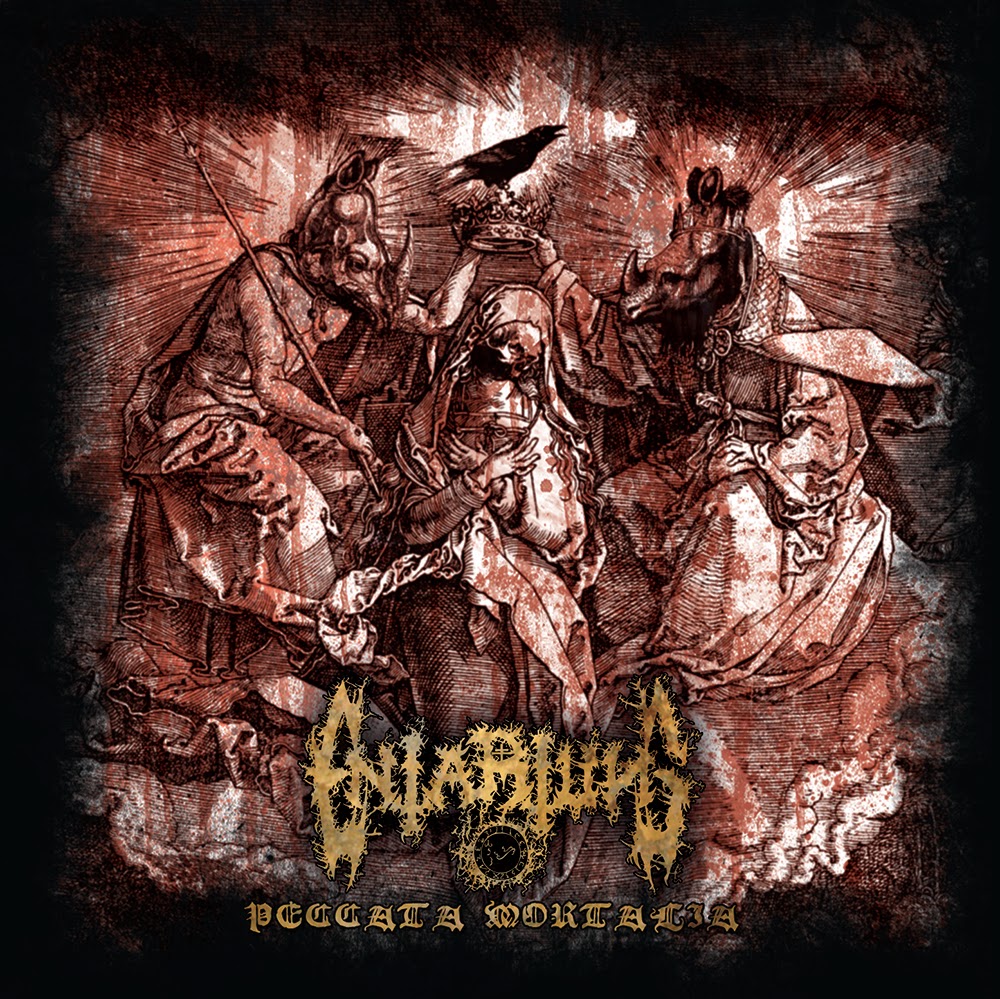 From the piano, whispers and ominous chants of its intro, to a series of raging melodic chord progressions threaded through its metallic content, Peccata Mortalia is another of those well-paced, thorough black metal recordings which thrives off its internal contrasts. A fulfilling experience in which you can traverse vast heights of suffering and desperate, longing valleys of fell glory, even if it's not the most unique of constructs with regards to the riffing patterns or instrumentation. Entartung was a name I had only a passing familiarity with from samples off their 2012 debut Krypteia, but then I'm slightly more likely to remember it this time, since this sophomore soars when it soars and offers just enough variation in pacing and conception that it never becomes exhausting...and seems quite a huge sound for just two musicians writing and recording everything.

The album is book-ended and bisected by piano shorts between 1-2 minutes in length, and these actually serve the express purpose of 'breathing room' against the longer, surging compositions like "Blasphemaverit in Spiritum Sanctum" and "To Conquer Immortality in the Depths", which are much in the melodic black metal tradition first manifest on the later 80s Bathory material (when they transitioned into Vikingmania) and Mayhem/Satyricon of the early-to-mid 90s. The differences here are that the chords are thickly wrought, the harsh rasped vocals are also barked out quite loudly in the mix, and the band implements a lot of atmospheric breaks to intercept any excess sense for repetition when they're raging along for such a swollen song length, in which the whispered, narrative lines return, samples from nature, or shimmering, slower guitars that balance out the moderately-blasted momentum of the usual fare. Tunes like "The Law of the Claw" have an eloquent but sinister vibe about them that really captures the 90s era when black metal was such a novel journey between the borders of majesty and savagery, and Peccata Mortalia is not a disc to put off purists.

On the downside, while the riffing progressions here are effectively bright, expressive and evil in equivalent quantities, they do suffer from the drawback of overt familiarity, faint variations on the many thousands we've heard through the past 20 years, and there isn't a lot of nuance or stickiness to how they've been crafted. The rhythm section sounds solid but bass-lines and drum sections aren't very distinct from many other bands, possibly because the duo focused more on assembling the guitars, vocals and lyrics. I enjoyed the piano bits and other atmospheric departures, but more because they really fleshed this out as an experience rather than were memorable on an individual basis. All told, Peccata Mortalia is a solid effort, just not one that is going to compete with, much less surpass so many others that have come before it. There are far worse ways to spend three quarters of an hour than in Entartung's eves, and the members' talents and familiarity within the genre are self-evident, but it's not an effort which is likely to resonate far into the future. That said, if you're into Arckanum's 2009-2011 material, later Maniac Butcher, Sargeist or Bathory's Blood Fire Death then this is worth a listen.