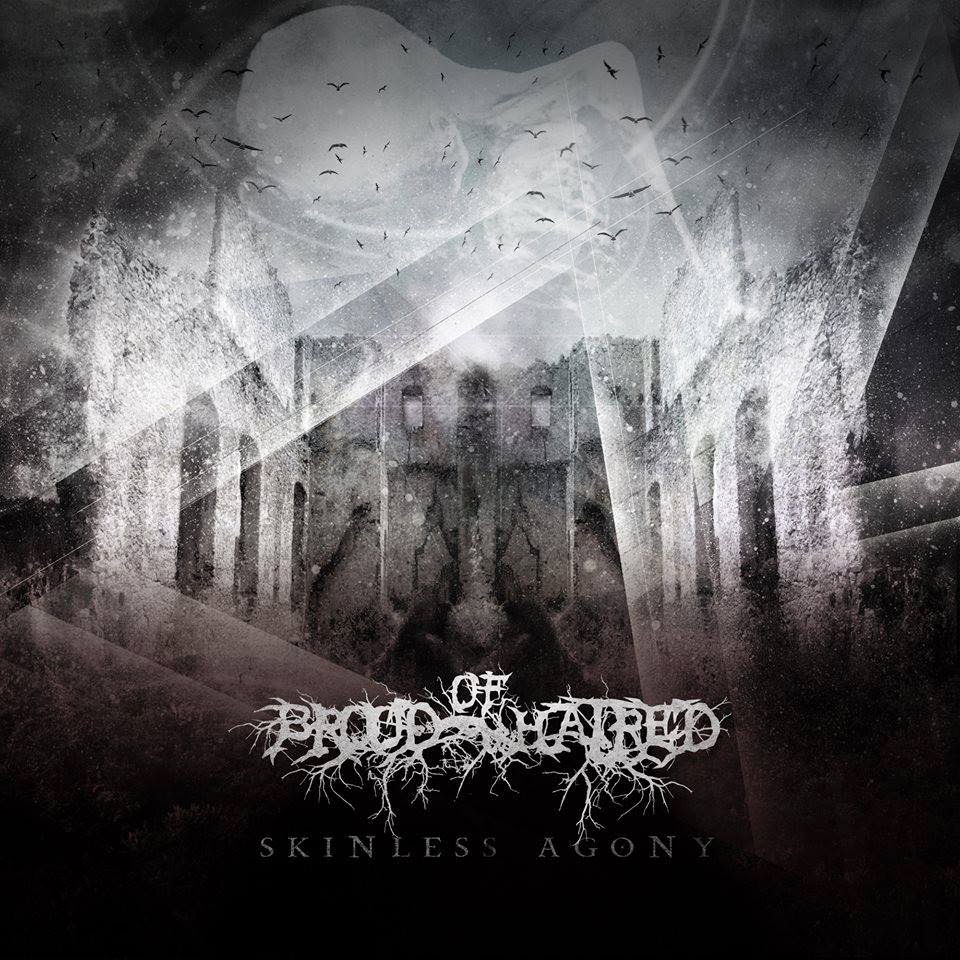 Brood of Hatred would not be the first time I've been surprised by a Tunisian metal act, and while their debut Skinless Agony is an entire world away from ethno-progressive pundits Myrath, it's an intelligent, detailed spin on the adventurous, atonal deathscapes pioneered by favorites like Immolation, Gorgoth and Ulcerate. And yet it actually stakes its own ground by incorporating more accessible, melodic guitar lines/leads in with the dissonant groundwork, and exemplifies the talents of its constituent musicians without becoming too flashy, indulgent or self-absorbed. Varied, professional, and packed with both depth and memorable riffing progressions, this is very much one of those records which comes along from left field and immediately demands an audience.

Consider me part of that audience! Incredibly consistent, inhuman kick-work serves as a concrete base for the explorations of the rhythm guitars, which swerve between tremolo picked sequences, winding cycles of clinical melodies, and dustier atmospheric textures serviced by the panning of each player into his own curious headspace. I won't say that everything these guys write is incredibly catchy, but it's persistently interesting and you can never figure out precisely what is happening next, so tunes like "The Mind That Emerged" and "Cacophony in the Creation" seem like vortices of fluid but fragmented ideas which cautiously measure off a harmonic warmth against the steady brutality of the bass drums, and plugging certainty of the bass-lines. Vocals express the least range, a deep guttural roar redolent of Ross Dolan or Luc Lemay, but it's almost a positive here to have something consistent to hold onto amidst the roiling, atmospheric precision of the instruments which are like sand-waves stretching against an obscure horizon. There's never a dull moment, and even the longer track "Obsession" is padded out by these refined, progressive drone metal elements that feel like recent Ulcerate albeit with more catchy licks.

Some might find the production here a little too modern, compact and refined, as they would with a lot of the later works of Brood's influences...and perhaps the bass drums seem a little too callous, machine-like and loud by comparison to the riffing passages, which were for me the highlight. However, I just can't imagine that dirtier, raw retro death metal tones would be able to deliver the entirety of this experience with the same level of fervor. Skinless Agony is a journey from fore to stern, and even if it never entirely abandons its core aesthetic principles for anything truly unusual, its 43 flowed seamlessly together, the one exception being the brief interlude "The Singularity is Near" which is comprised of keyboards, cautionary narration and what sound like nuclear fallout sirens or something; which come to think of it, casts a sort of post-apocalyptic, Damnation Alley feel upon the rest of the record. But this isn't much of a distraction, and at the end of the day, Brood of Hatred warrants an easy recommendation to fans of works like Gorguts' Colored Sands, Flourishing's The Sum of All Fossils, Nader Sadek's In the Flesh, Ulcerate's Vermis, and nearly anything Immolation has released in the 21st century. Killer, compelling death metal.