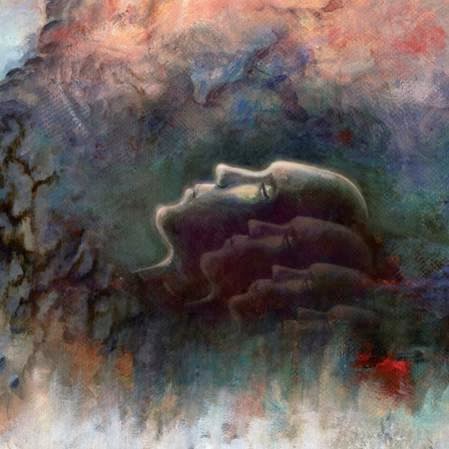 Morbus Chron had already proven it was anything but the cliched Swedish death metal experience on its debut Sleepers in the Rift and the ensuing EP A Saunter in the Shroud, so color me unsurprised that their full-length sophomore proves an even greater departure from the base, traveling about the same distance from the norm that Tribulation did with last year's The Formulas of Death, or the latest record from Norway's Obliteration. This is a good thing, people, because of late I've found the typical regional tone and d-beat aesthetic exceptionally redundant and stagnant like a half-open pickle jar that's been let out into the sun for too long...not that I enjoy pickles to begin with, but Sweven is just as tart, crunchy and acidic as any you've had in recent times.

The title is, I believe, an old term for 'slumber' or 'dreaming', and it's remarkable how the musical decisions (and obviously the cover art) capture this state of unconsciousness with a wonderful contrast of tension and trepidation. Acoustic guitars are used throughout the record as if a backdrop to some slowly building horror, as catchy as involved as any of the electrical-charged emissions they run us through once reverting back towards that sort of curious antique-Morbid Angel-meets-Autopsy aesthetic they cultivate through the gruesome, unhinged vocal growls and the hectic nature of the guitars. Though aggressive, Sweven is laced with note selections of an even more melodic texture than the debut, shifting between brazen, bristling death metal progressions and a sheen of bright blackness in some of the tremolo picked passages, with a clean and harmonized tone that continues the band's juxtaposition of the otherworldly and organic. Tasty licks like the spooky thrash harmony in "Aurora in the Offing" or the atonal, almost bluesy open picking in "Ripening" are constant, and I never felt like anything was repeated over the substantial 53 minute experience.

The drums sound fantastic, from the restrained but effective blasting to the excellent balance of cymbal crashes that emphasize the atmosphere; crucial since Morbus Chron doesn't exactly saturate the sounds with psychedelic keyboards or effects beyond those that the core band might tear out on stage. The bass is somewhat relegated to a muddy, supportive flow, which is partially the point, but due to the heavily melodic focus of the riffing it definitely stands out enough, and considering the sheer variety of riffing techniques over Sweven it's thankfully consistent. But perhaps the greatest sounds on the album hail from the aforementioned acoustic tones, beautiful in a cut like "Solace" which is pregnant with the ringing of what sounds like deep piano tones that lend it some gravitas. This is such a perfectly implemented component of the album, not only on the shorter instrumental pieces but also when used to set up some morbid, harrowing metal track that it makes a lot of other metal bands who eschew the use of cleaner guitars seem like they're really messing out. It's not 'cheap and folksy', and it's not just something they use for an intro and then abandon.

I can't emphasize enough just how important this small group of Scandinavian pioneers has become amidst the insipid ambitions of so many of their peers...sacrificing the security of numbers for an adventure into the possibilities found only on the borders of classification. Morbus Chron, Obliteration, Tribulation and Necrovation are to me the bands that will be remembered long after the Entombed-a-thon, which has widened its gyre now to swallow a lot of American grind/hardcore bands in addition to its local practitioners, at last subsided. While it might not be incredibly memorable during individual moments, Sweven creates a constant swath of mood and subtle malevolence which I can't imagine would fade if I listened through it in 10 years. A truly timeless production which does not neglect a sense of dread and the unexpected once the listener closes his/her eyes to consume it. I liked the first album a little bit better, but at the same time I think this one will cast a much wider net. Was very near my album of the month, will certainly have a presence on many year's end lists, and cements the Swedes as one of the most legitimate and talented acts on a Century Media roster which seems to be half-intent on returning to substance and quality (or piggybacking on the retro death metal bandwagon, but if that results in this, so fucking be it).