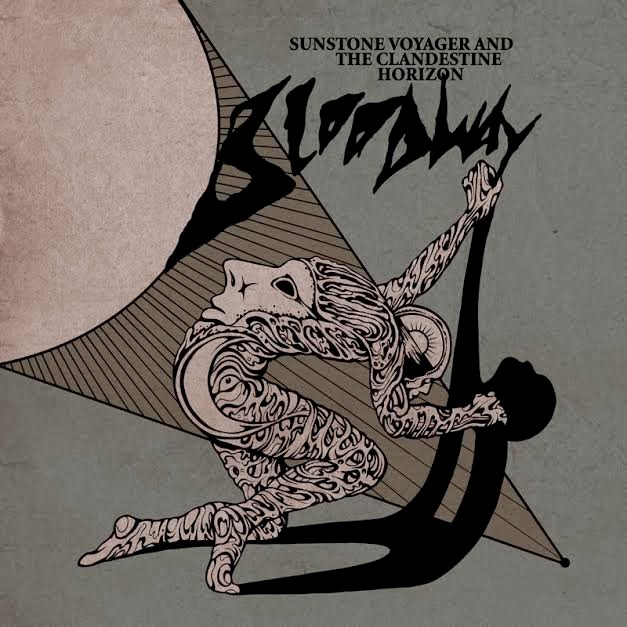 Thanks to an unhealthy obsession with nearly all that Negură Bunget has released over the years, Romania has long been a scene I've turned to expecting to hear new sounds, fresh spins on stagnant genre tropes which aren't always a bad thing, but generally redundant. To this end, Bloodway's inaugural MCD Sunstone Voyager and the Clandestine Horizon has not let me down. Even just looking at this, with its simple but unusual logo choice, abstract artwork, you've just no idea what it might sound like apart from some potential psychedelic influences, and knowing that its being issued through Italy's I, Voidhanger imprint grants some measure of quality control and reliability. So, it's really no surprise that Bloodway is fascinating, and within 26 minutes had already hooked me through both lips and reeled me on board without much of a struggle.

I saw this categorized as 'dark metal' somewhere, and while this isn't an inaccurate aesthetic identifier, I'd prefer to think of it as alternative black metal which meddles in a few of the fundamental characteristics but sets its own course quite early. Voluptuous, muddy bass lines sway below organic, dissonant guitar riffs that favor a blend of jazzy post-black, post-sludge, post-me-saying-post structures which immediately engrave onto the imagination that this will neither be the most uncomfortable nor comforting listen. They very early on prove they can seamlessly transform between crawling, shadowy grooves and unnerving, horror flick blast beats in "The Skeleton Key", but as with any great record (or horror flick), you can't exactly predict what is to come in the next scene or measure. That's not to say they become so eclectic that they break character, but it's ever a pleasure to hear what the guitars will mete out, and the vocal rasp of Costin Chioreanu has this truly spirit wrenching quality about it which seems to find a medium between Sakis Tolis' passionate bark and Martin van Drunen's visceral ghastliness. Even where Sunstone Voyager... seems at its kindest, there's that constant undercurrent of pain and cruelty.

Drums bounce flawlessly between fragments of rock beats and extreme metal techniques, and really the whole production of this disc is loud and functional like a really excellent jam room performance which can rival most studio wizardry. It's not quite so hazy and psychedelic as I might have thought, nor would I dub this 'progressive' metal, but its adventurous and has a subtle Gothic taint to it which makes the more somber, bass and vocal driven passages just as profound as when the riffs are jamming out. Really, this is something which stands on its own, easily recommended to followers of prog sludge/doom, Greek black metal (Rotting Christ, Necromantia), or other artsy regional acts like Sear Bliss and Negură Bunget. But even that doesn't paint the entire picture of what this sounds like, so you'll just have to hear it for yourself. The material isn't immaculately catchy, but compelling and subduing enough that I've given it a half dozen runs through, and have no intention of stopping there, or missing out on whatever they'll create next. I just hope I don't get tetanus in the meantime from this damn thing in my mouth.