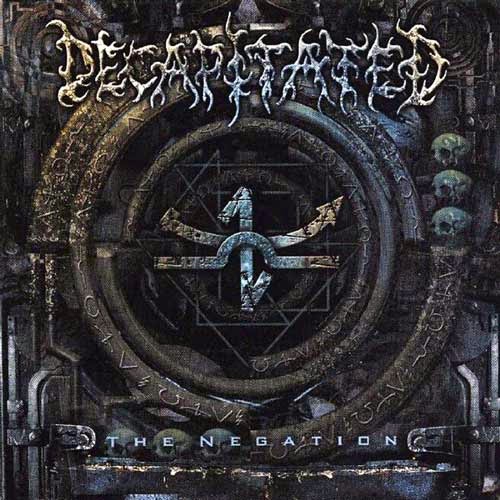 The final album from the classic Decapitated lineup (before Covan stepped in to replace Sauron) also happens to be the one I most struggle to remember. Both the cover art and production values of The Negation are superior to Nihility, but musically they seemed to continue a process of stagnation without abandoning the energetic musicianship. A lot of the riffing passages remind me quite a lot of Morbid Angel circa Covenant or the faster Vader blitzes, or more accurately an analog to Behemoth's death metallic tirades of the late 90s/21st century; sufficiently explosive and muscular, but lacking much real staying power once the percussive consistency has vacated the listener's brain. This album does indeed sound great through the speakers, and I kept waiting for those money shot guitar progressions circa the earlier albums to help fill out the intensity of the execution, but they never seemed to cu...show up. It's safe harbor to a number of retread ideas thickened with a little more meat.

For example, "Three-Dimensional Defect" has a lot of that pinpoint muted aggression circa "Spheres of Madness", only with more shredding in there; while a number of other tunes have opening riff salvos that almost remind me of new millennium Slayer material if it were to quickly be subsumed by Sandoval blast storms and picking punches that lack a lot of individual character. This is very likely Decapitated at its densest, and I do enjoy the guitar tone a lot here as it eschews the aridity of its predecessor, but as one seeking those winding, hectic but highly musical note progressions that defined Winds of Creation, I felt like this album often suffered from a lot of what might plague a band like Krisiun, that Morbid Angel or Deicide-inspired reliance on heavy brickwork without much clever or unique songwriting. Brutality and speed first, and a lot of insipid palm mute passages to which distinction is a foreign concept. The sword is mightier than the pen this time around, and the best I can say for it all is that Vitek's drumming certainly seemed to have continued to develop. This is probably his most intense performance over the four albums he was with the band, but without anything interesting to beat the skins to it just doesn't matter so much.

I have a hard time coming up with even a half-dozen guitar parts on this album that I'd consider keepers, like in "The Empty Throne" or "Three-Dimensional Defect" which felt like leftovers from the Nihility sessions, or a lick or two from the title track. Sauron sounds a hell of a lot like David Vincent on Domination, which is not a negative necessarily, but the guy would simply never evolve his gutturals into something that a hundred other guys don't already have covered (he's a little better on the second Masachist effort, Scorned, but still not unique. Lyrically Decapitated remain consistent, they've never been a gore band, so the song subjects deal with the constraints of our flawed beliefs, religions, human vices/impulses or civilizations as a whole, but then the music is just too rarely thoughtful to drive them home. They cover Deicide's "Lunatic of God's Creation", but unlike the Slayer tune on the debut, there's not much making it their own, because aside from a few production tweaks its exactly like the origin...stylistically dependent, and that post-bridge section seems to have directly translated into a handful of their own riffs on this album. The Negation is ultimately one of those albums which comes off as effectively brutal without much need for dizzying complexity, but after a decade of second chances, it just don't cultivate enough sticky chops to bother with.