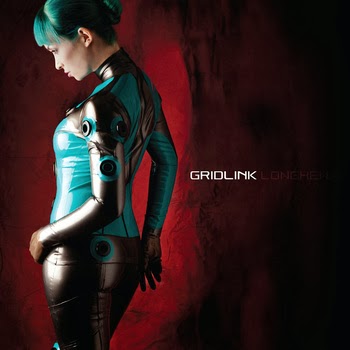 Abandoning the Oni devil masks of their previous album covers for something more sleek and contemporary, one might also assume the music of Gridlink would follow the same course, but that's not wholly the case. Hands down one of the more curious and technical grindcore acts I've heard over the last decade, their third and final full-length outing Longhena is a breat...blast of fresh air amidst a largely stagnant scene of acts who perhaps too closely ape a small catalog of records from the mid 80s through the early 90s. In fact, structurally the music here seems to have evolved more from a dissonant post-hardcore aesthetic, dialed up to annihilation, rather than the more death metal-infused albums I usually come across, so this is more apt to appeal to fans of Agoraphobic Nosebleed, Discordance Axis, Melt Banada and the faster-paced Dillinger Escape Plan tunes over Napalm Death and Terrorizer.

What makes Longhena ultimately so listenable is its pinpoint musicianship and variation. Most of the tracks are cut of a comparable, spastic fabric, but they're not afraid to jump genres entirely, like on the scintillating ambient string/guitar piece "Thirst Watcher". Granted, I wish they would have offered 2-3 more instances of such broad departure as 'breathers' amidst the typical turmoil, but being a grind group, it's not like they waste a lot of time battering away...the entire track list has blown (or drifted) by you in 22 minutes; they never just stand their with their dicks in their hands, but piss and flail wildly about and then collapse in on themselves. The rhythm guitar progressions infuse a lot of hyper-thrashing picking sequences with a lot of jarring minors which give that impression of DC/NY post-hardcore being played on fast-forward, but they'll also splay out some surprise trad/power metal guitar patterns (like the intro to "Look to Winward") or a few slower bricks of power chords before they do their impression of the Road Runner. During a number of the blasted elements, when vocalist Jon Chang is meting out his most vulpine snarls, I was even left with the impression of a bit of hi octane dissonant black metal if it were bisected by jumpy, mathematical break riffing.

In other words, Longhena is simply not the most predictable of these sorts of records, and that goes a long way when tunes have to impress you in 90 seconds or less. The drums are naturally intense, blasts all over the place, but they're also exhausting, so I found myself appreciating the fills and change-ups more than the constants. Bass has a nice, low curvature to fill out the rhythm guitars, but they're such a driving force that it often feels understated when it's not veering away from the root notes. I've come across so much of the Swedish-style d-beat/guitar tone penetrating grind and what's being lately dubbed as Entombed-core that Gridlink's more direct, punchy saturation seems distinct and refreshing, and while Chang's rasping and raving might not seem all that unique for the style, it fits the riffing like a glove, capitalizing on the incendiary songwriting, brief flash-fires that speckle a distraught urban landscape. The album isn't as futuristic and fashionable as you might guess by looking at the cover model, who seems like she's about to pilot an EVA mech. It's not 'cubicle grind' or anything of the sort, but it's adventurous enough to retain the attention span of its audience, and even if not incredibly memorable, an intense swan song to leave us pondering while we reattach our heads.