The Nihilistic Front - Procession to Annihilation (2013) 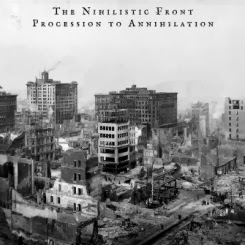 The center spread of the album booklet reads 'EXTREME FUCKING DOOM' over a smoggy, black and white cityscape, and I really can't think of any better way to describe it. The Nihilistic Front, true to their name, perform an unfeeling, oppressive mesh of death and doom metal aesthetics which, while not exactly funereal in nature, is like watching a civilization smolder and decay. Granted, it's exceedingly simple; the riffs are to rocket science what a grain of sand might be to a desert, and normally, this sort of minimalistic approach to writing is not one I find the most interesting, but this Australian duo is not devoted to nuance so much as sheer effectiveness, meaning it's hard to imagine having any sort of bright and cheery day after they've bulldozed you in slow motion with their music. Process to Annihilation is nothing if not effective, but you've got to approach it with just about zero expectations other than dying from the audio equivalent of blacklung.

Fat, sluggish bass-lines anchor a series of monolithic, sprawling chords that run an aesthetic range from depression to extinction, often transforming into more 'uptempo', roiling death metal tremolo patterns that feel like someone lost something in your intestines and is fishing through your guts to find it. Feedback erupts with no hesitation, and the vocals cycle between black hole gutturals and bile-swishing snarls, and the drums crash along with a grim certainty that belies speed and technicality, which is all that is truly required of them. They will implement some spoken word-like passages and effects which give Procession an entirely contemporary feeling, this is not the doom of antiquity but of 20th century industrial societies running amok, and it exudes that same sort of helpless feeling you might feel when paging through photographs from WWI or WWII, just like the blasted out buildings in the booklet intend. There are only four tracks ranging from 8-14 minutes in length, and not a whole lot of variation between them, but the production is just so raw and megalithic that it recounted the reaction I had to British bands like Bolt Thrower or Godflesh, only filtered through the glacial pacing of a Winter or Disembowelment.

Though most of the guitar patterns are pretty unoriginal and predictable in composure, The Nihilistic Front seems to exempt itself from the usual tired response because they just sound so goddamned heavy that it makes such vapid structure seem whole again...or fresh...or new. I cannot look at or listen through this album without feeling like I got exactly what they intended, exactly what I deserved, and I think that makes it an easy recommendation for death/doom purists who want soul-wrenching, unforgiving and utterly without hope. You won't hear any subtle brilliance, or spy any lights and the end of tunnels, rays of sunshine spotting the cloud-cover...just endless fucking soot pumping out of smokestacks, settling on your skin and making you choke your life out. Don't listen to before you've got a birthday or wedding to attend, or any sort of important life event to which you need to wear a smile and a warm embrace. Instead, listen to this afterward, when you finally realize that all hope and happiness is naught but a fleeting, hollow proxy for the realities of the universe...emptiness, all-consuming darkness and despair, and civilizations cranking on cyclically to their cancerous ends. Apologies in advance.