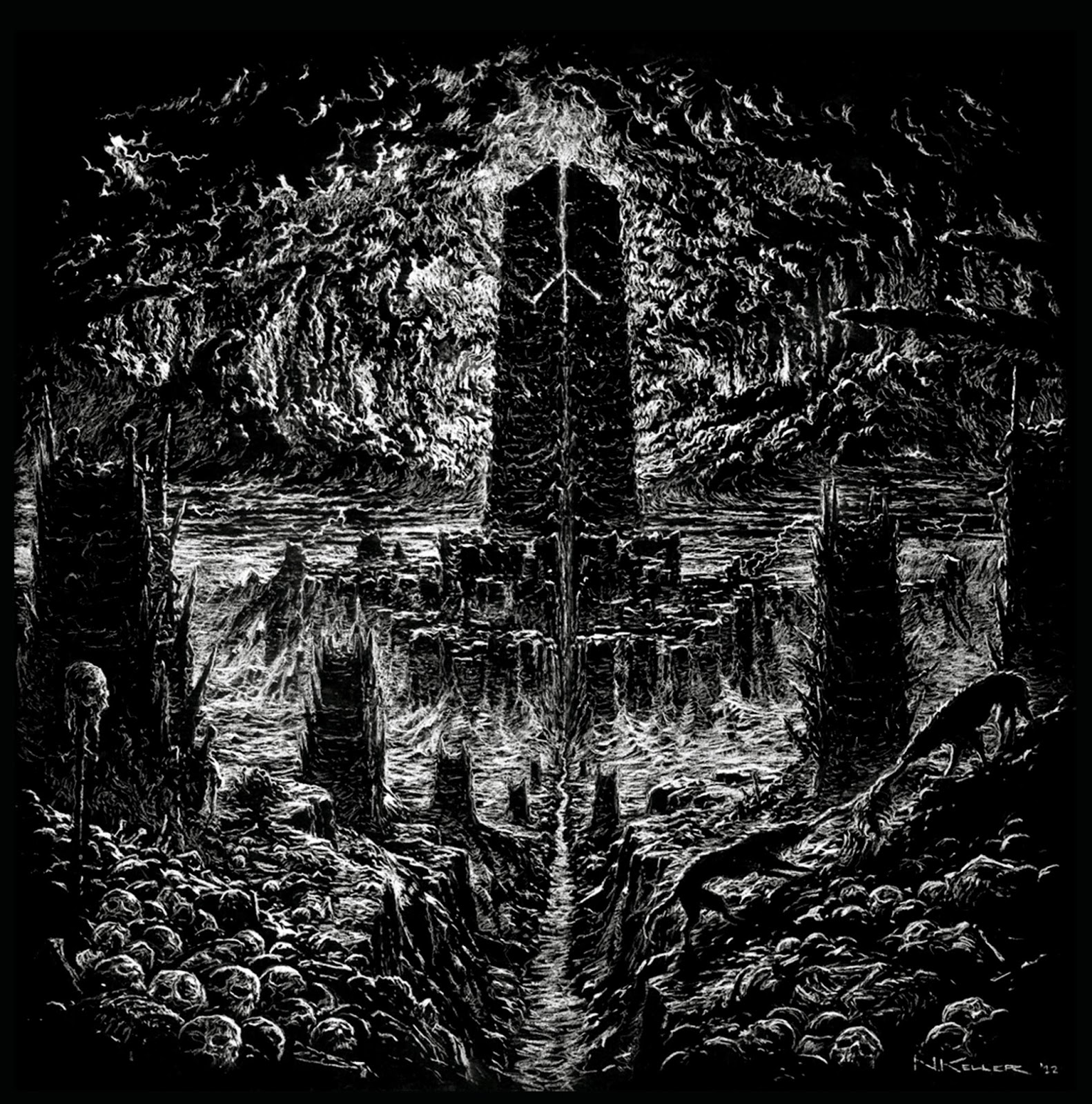 Similar to their Hammer of Intransigence EP from 2011, Wælwulf presents this incredibly stark and apocalyptic cover image and then attempts to meet its crushing effect with some of the most brutish and savage black/death war metal possible. But despite the buzz the New Zealanders had surrounded that outing, I wasn't quite sold on their style. The guitars were just too drudging and simple, imagination and creativity eschewed for pure primacy, the riffs and vocals void of nuance, and at the vortex of their intentions, hostility seemed a trump card over the notion of evil; barbarism besting malevolence. So, for some listeners, I'd imagine it was working very much as Heresiarch intended, but if I'm bored within a few riffs and there's nothing unexpected on the horizon, it doesn't speak well for my reaction.

Oddly enough, Wælwulf continues this very practice, but I felt it was more successfully engaging to the ear. Unapologetic and perhaps even more nihilistic a discourse than its predecessor, but the simplistic chord structures bleeding into tremolo patterns, frenzied and listless outbreaks of distant lead guitars and layered growls and grunts seem to present this primitive, angry maze that I was more absorbed in. Granted, they're still not about to win an award for subtlety or stickiness of writing, since the rhythm guitars seem to hone in on the same small subset of chords and just fist them repeatedly, from open, muddy notes to belligerent, berserker chugs over which the vocals have a sort of call/response nature and some ambiance howls off in the backdrop ("Endethraest"); but despite any shortcomings, that's probably my favorite tune they've written yet. Another interesting piece is the closer "Abrecan", which largely consists of voluptuous, sludgy bass and feedback driven, downtrodden riffing influxes with more ritualistic, chanted growls that capitalize on the atmosphere of the second tune...I'd liken it to an 'epilogue' of war metal, when the bodies lay blasted and spent about the theater of violence, ravenous, howling vultures circling in the form of wailing feedback akin to nuclear warning sirens...

So, yeah, this is more experimental than the last EP and ultimately a lot more resonant with me; I think they might even be 'on to something' with the latter 2/3rds of the experience, though the material would still really benefit from  some more interesting guitars once they hit full burst. To describe Wælwulf on the whole would be like early British brutality like Bolt Thrower or heavier Godflesh meets Incantation/Disembowlment, and then the resultant, roiling mass irradiated with Canadian psychopaths like Conqueror, Revenge and Blasphemy. If you think about such an equation, there's a lot of potential there for just clubbing the fuck out of the listener to such an extreme that only an imprint of his skeleton remains like chalk on the barren rock beneath. And this new EP really services such an analogy, so if you were on the fence with the last record or simply never heard them before, start with this fractionally abhorrent evolution.