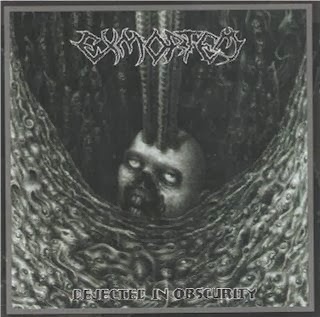 There's probably no way Exmortem could have known that the title to their sophomore outing would prove a summation of their entire career, but it's funny to think that, so I WILL. Sadly, this was yet another good album arriving at a time when brutal death metal was exploding, and possibly overlooked because the Danes might have lacked that same sense of technicality that bands like Suffocation and Cryptopsy were reigning over while converting the legions of metalcore fans and nu metal expatriates into the realm of better taste. Dejected in Obscurity is the sort of album that might have appeared in the earlier 90s, basically retaining the debut's old school evil tremolo picking progressions and injecting a little more uptempo aggression with the frivolous lead sequences that one was lacking.

This isn't quite so dense and opaque as Labyrinths of Horror, sacrificing a fraction of the morbidity for a more dynamic sense of pacing; but it strikes a lot of the same nerves with the guttural belching. I felt that the guitar tone here was a little less impressive, but at the same time thinner and cleaner and better suited to let the syrupy bass lines through in the mix. The wails and slides of the brief solos add an entire new level of vile contrast, and the drums are a lot scrappier and give the whole disc a more calamitous appeal (the last album Mike Nielsen would record with the band). Backing vocals have changed slightly to a more indistinct bark, which I didn't care for as much as those on the first album, since they gave it a bit of a grindcore spark that was really unnecessary, but these aren't exactly an obstacle or distraction; they play a somewhat insignificant role when competing with the growls or shifting riff patterns. Dejected in Obscurity also benefits from a wider level of variation than its predecessor, they fiddle more with the listener's mood and expectations while remaining consistent through the faster paced material which plays like a blend of older Morbid Angel and Poland's Vader.

Not an immortal record, exactly, just another 'good one' from the later 90s that you might not have heard, because it has no real gimmick or selling point beyond the fact that genre completists will enjoy its purity of purpose. You can tell here that these Danes were probably really into the more malevolent West Coast thrash mayhem in the 80s (Slayer, Dark Angel, Possessed) because they really lay on that sort of intensity and excitement thickly, which was so formative to Florida's budding death metal evolution, which definitely had a hand in Exmortem's stylistic choices. I would say this was one of their worst records, and it's still entertaining, which says a lot for just how damned consistent they were until their eventually disbanding in the following decade (and century). The cover's a little bland, and the production doesn't really stand out beyond a reasonable level of concussion and clarity, but those seeking some genuine 90s death metal thrills without needing to join the 'Cult of the Old New' should add this to their radar, along with just about everything Exmortem ever recorded.