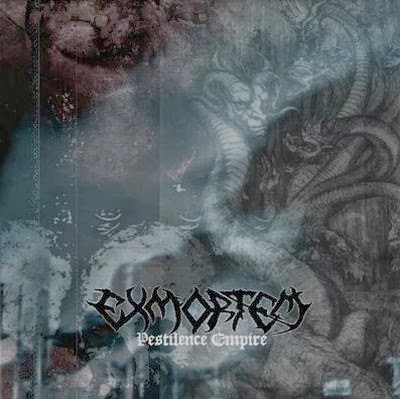 It's got to be discouraging when you've released four records and each is on a separate label, and in fact this curse would plague Exmortem for all six of their full-lengths, signed to a 'who's who' of European extremity. For Pestilence Empire, it was Osmose Productions out of France, who likely provided the most visibility for these Danes, and thank fuck they took advantage of that by producing what was clearly their best album to that point, securing a more solid four-piece lineup, with a new rhythm section (bassist Mephistopheles, drummer Galheim) coming over from a number of previous, deeper underground projects in which they had worked together; which translates into a really tight execution here as they complement Sigtyr's more involved and intricate riffing passages.

As Dejected in Obscurity was to Labyrinths of Horror, so too is Pestilence Empire to its predecessor  Berzerker Legions. Against a reliable backdrop of comparable, blasting excess, the songwriter is far more atmospheric, evil, roiling and surgical in its construction, and while that doesn't necessarily manifest into a highly original set of tunes, its certainly their most otherworldly and accomplished recording in terms of both technicality and raw punishment. Tunes like "Pestifer" are possessed of these out-of-left-field dissonant chord structures and sliding weirdness that seem to channel amorphous Lovecraftian horrors while persisting in a churning, nihilistic undertow thanks to the excellent fucking guitar tone. "Malus Invictus" basically takes the unrepentant speed of the prior album and injects some punchier, unexpected riffing twists and a double kick sequences you can feel deep below your chest cavity. The finale, "A Tyrants Hunger" has that sort of peppy and clinical technicality in its architecture that reminded me heavily of the first Decapitated or some of the faster Vader material of the 90s, with some choppy evil old Pestilence death/thrash harmonies.

This new bassist and drummer made it seem all too effortless, and even though the album might still rely a little too much on sheer blasting, Sigtyr had arrived at the perfect counterbalance, which was to make just about everything he played either interesting or malevolent enough to surrender any shortcomings. I'd also add that Smerte sounded louder here, his voice taking on a more cavernous aesthetic where it's clearly bouncing back and forth to contrast the more busied guitars. About the only real gripe I could offer against Pestilence Empire is that it still could really use some outbreaks of whipping, wild, incendiary leads in the Morbid Angel fashion where they would just leave the listener speechless. As it stands, Sigtyr puts so much work into the construction of the guitars that there were points where I just wanted the guy to take off into the stratosphere and I felt like I was still left on the launch pad. They need not even be too technical, just frenzied and messy and thrilling. Otherwise, Pestilence Empire is quite spotless in presentation, I like the dark and moody sound which isn't brickwalled or overproduced, and this remains in my opinion their very best album. If someone wanted to know where to start with the Danes, track down a copy of this and their 2008 swan song Funeral Phantoms and explore what should have been a better known band.